Let Us Be Indignant, But also Rational 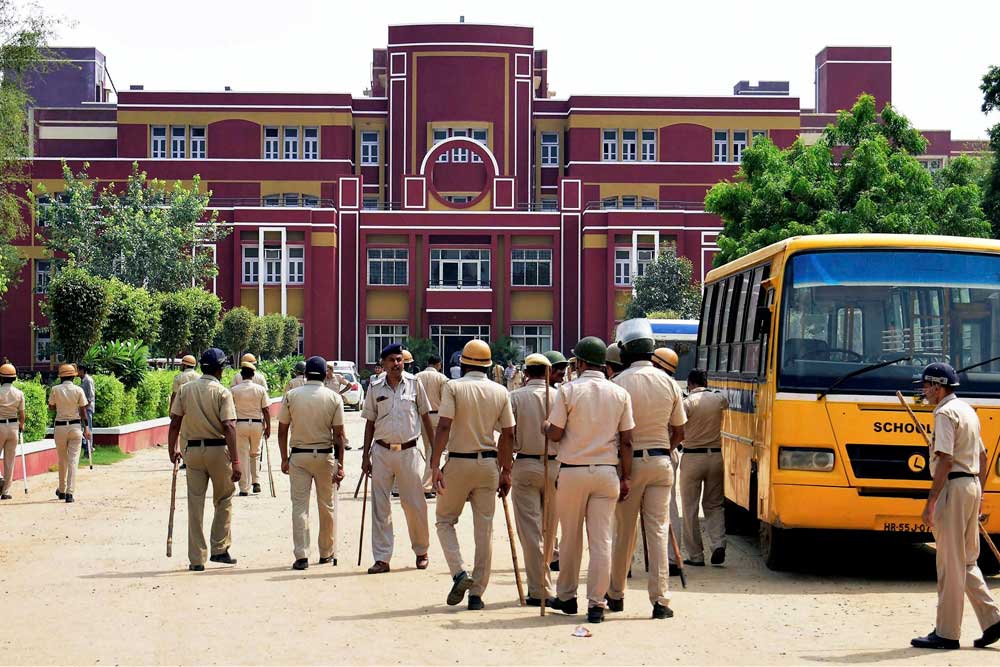 The murder of an innocent, promising student in Ryan International, Gurugram, is too horrific to be contemplated. It should not have happened. We are in instinctive and unreserved solidarity with the bereaved parents in this hour of unmanning sorrow.

Grief is too personal to be shared. None of us can approach, much less, understand what the parents of the slain child are going through. So, it is with fear and trembling that we reckon this event. But, having headed an institution from 2008 to 2016, I feel urged to record and share my thoughts and concerns regarding this event. First, there are serious lapses on the part of the school. Going by reports, the administration appears to have been unresponsive to the concerns and complaints of the students as and when they were expressed. This kept the door open for the crime to be committed easily and brazenly inside the school at the beginning of the day’s session.

But let us ask ourselves, “Can any institution be careful and vigilant enough to ensure that no untoward event happens in its premises at any time? Is such fool proof vigilance and systemic perfection feasible or attainable? I faced this issue vis-à-vis the diurnal security of the lady scholars resident on the campus of St. Stephens’ College. I had a study conducted by a senior woman faculty member. She did a competent job and came up with a good scheme for beefing up campus security at night. But it got stuck at costs. Who will pay the hefty bill? The government will not. The parents/students are reluctant. I was told that the management should scrape the bottom and pay. The management could not. Believe me, an institution, like St Stephen’s, that does not collect a single rupee donation from students, and gets only 95% of approved expenses reimbursed by the UGC, has little financial flexibility to swallow additional financial burdens. Shouldn’t the State invest a bit in the safety of its future citizens?

Now, ask yourself. Would you have liked it if, prior to this gruesome murder, the school had set up CCTV cameras in toilets? My daughters studied in a Delhi school. The nun principal, who was ever-vigilant about the security of the students, was ridiculed and despised by students, accusing her, in their fatuous banter, of being addicted to voyeuristic pleasure! My readers have to thank their stars that they are not heading educational institutions! I remember how I was vilified by some of the alumni of St. Stephen’s College for installing CCTV cameras in the college mess to check pilferage and alcohol consumption, which were rampant in the mess. An alumnus, accompanied by four of his friends, barged into the mess and kept flashing his middle finger obscenely at one of the cameras, unmindful of the lady students, who were around and watching.

We must also reckon the difference between us and the plight of the school administration in this instance. We are reacting in hindsight, which they did not have till the event hit them. No institution strategizes its routine life in terms of calamities. Routine life is managed in the mould of normalcy. By this I don’t mean to imply that an institution should not anticipate calamities and provide for emergencies. That, however, is not the norm. It is hypocritical to pretend that it is, anywhere.

Also, there is a limit to which security can be pushed in any institution. You certainly cannot deploy security staff at every nook and corner of a school. Intellectual growth cannot take place in an ambience of paranoia, fear and suspicion. To think factually of this aspect of a school, let us keep in mind two references: the slap challenge in a school, reported recently, that resulted in a student losing 25% of his hearing in one ear, and the blue whale challenge.

Can an administration really avert a student slapping another hard on his cheek, when the slapped and the bystanders are complicit in the event? You could be mad at me for comparing this episode with the fatal atrocity in Ryan’s. But, from an educational point of view, one is as unacceptable as the other; though from a criminological point of view, the former could seem no more than a fleabite.

The blue whale challenge epidemic is far more appropriate. Consider this. If parents cannot know what is happening to their children under their own roofs, can we condemn teachers and administrators in a school for not monitoring the movements of every student?

Please don’t get me wrong. I am not trying to whitewash the culpability of the school or play down the agony that the parents will suffer lifelong. I am only pleading that there is a general malady rising in our midst to which such crimes are related.

It is unhelpful that in the cyclonic eruption of anger in the wake of the Ryan’s tragedy, the heart of the matter is lost sight of. The culprit(s) must be booked and punished. But that is only the short-term task, important as it is. The long-term task too needs to be flagged.

Catching and, if you like, hanging the culprit has a therapeutic value for the traumatized family. That is valuable and needs to be done so that the eye of their agony may close in the foreseeable future. But the most important task is to prevent such crimes from recurring.

It is naïve to assume that deterrence -the argument of force- will avert the recurrence of such crimes. This is not borne out by empirical data. Nor will a further amplification of draconian laws help. Law, law enforcing agencies and punishment come into play only after crimes are committed and precious lives lost. The challenge is to avert tragedies and to protect life.

The most formidable hindrance to making any progress in this direction is the menacing rise of violence, even its valorization, in our society. We are already in a state of dinner-table familiarity with crimes and violence, with godmen turning icons of crime and depravity. The perpetrators of heinous deeds have their patrons and apologists. Most crimes remain un-cracked. Culprits go unpunished. Especially those who wear the armour of politics.

Law can deal with only committed and cognized crimes. It cannot check crimes at the stage of contemplation or commitment. Crimes are committed under the presumption that one would escape scot-free. That given, only one thing will help: imbuing the society with a sense of the sanctity and inviolability of life, which can act as an internal deterrence to crime. Today we situate deterrence external to would-be criminals. Our ancestors were wiser. They erected deterrence within individuals, so that criminal instincts, which are latent in everyone, are nipped in the bud.

The acting principal of the school kept saying that the routine school prayers were said over the PA system that day, as though that should have averted the tragedy. This betrays religious crudity. Spirituality is confused with magic! Saying a prayer has nothing to do with nurturing compassion and a sense of justice and fellow feeling. A society needs to be imbued with godliness, respect for the sanctity of life, for it to be humane and healthy. Crime betokens social illness.

Well, you could argue that what I say cannot apply to the bus conductor -assuming that he is the aggressor- in the present case. Yes, but only in a narrow sense. Bus conductors are not students, all right; but they too are products of the society we craft. Every criminal is, like it or not, a mirror held up to the society, which is a collaborative construct. It is surprising that we can sleep smugly over riddling our society with crime and violence and expect its arrows to not pierce our souls at any time. As the old proverb says, the cat you overlook in your back yard today will spring up as a tiger in your bedroom tomorrow.

End of the day, events like this gruesome murder cannot be viewed adequately without reckoning the evil of commercializing education, which corrupts the learning milieu. Commercialization kills caring, which seems to have happened in this instance. In this respect, it would help if parents would abandon the stupid dogma that the hefty fees they pay will convert itself into safety and academic excellence for their children. Almost every worried parent in Ryan premises kept referring to the massive fees they pay; as though that should have taken care of everything. Sadly, my friends, it doesn’t work that way. There are things money cannot buy; and it would help to pay heed to such things as well.