Haunted by the Ghosts of Babi Yar

Ajay Kamalakaran visits the site of a mass grave in the Ukraine where over 34,000 Jews were gunned down by Nazis and local accomplices in 1941 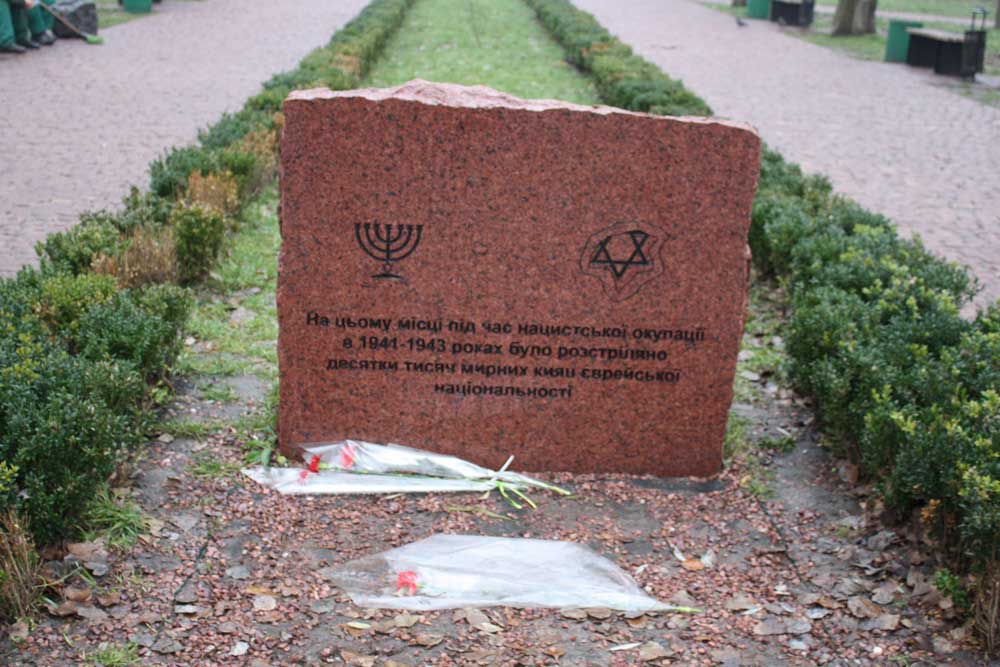 Do violent deaths leave some sort of residue that lasts for decades? In a world that encourages shying away from anything that appears remotely unscientific, how does a rational human being justify the feeling of subtle but real energies? A trip in December 2017 to the venue of a terrible 1941 massacre has me still questioning my steadfast commitment to rational thought.

The story begins with a walk after a sumptuous Georgian dinner in the heart of Kiev. As we passed the Ukrainian capital’s Khreschatyk neighbourhood on a bitterly cold evening, Grigory, a local friend explained how all the buildings on this major thoroughfare were rebuilt after the Second World War. By September of 1941, it was clear that the USSR would not be able to hold off the invading Nazis.  A large number of architectural gems were destroyed by a fleeing Red Army that knew that Hitler’s men would have control over the ‘mother of all Slavic cities.”

The area surrounding the Ukraina Hotel, which became the rallying point for a 2014 coup that deposed of a pro-Russian government, has few reminders of the Second World War. Instead, Ukrainians look at the neighbourhood, which held demonstrations that won them what they consider true freedom, as a contemporary scared space.

Partly raised in New York City, I grew up on history lessons about the Second World War, an event that I look at differently after having lived in Russia. While citizens of the Allied countries may argue about the real reason Nazi Germany was defeated, there is no debate about how evil the Holocaust was.

On this walk on Khreschatyk, Grigory told me that Babi Yar, scene of one of the worst massacre of Jews was close to the centre of Kiev and that I could easily navigate the city’s underground trains and find the place.

On that cold winter night, as I sipped some Darjeeling tea and took occasional glimpses of the well-lit St Sophiya’s and St. Michael’s monasteries from my 13th floor hotel room at the Hotel Ukraina, I was engrossed in reading about the lead up to the Babbi Yar massacre.

Kiev fell to the Nazis on September 19, 1941. Within a week the occupying forces issued a decree in Russian, Ukrainian and German:  “All Yids in Kiev and its vicinity must assemble on Monday, September 26, 1941 at 8 in the morning at the corner of Melnikova and Dokotorivskoi streets. Bring identity papers, money and valuables, as well as warm clothes, linen etc. Any Yids who don’t follow the order and are found in another area will be shot.”

Reading this sent shivers down by spine as I turned in for the night.

By 9 am the next morning it was visible that there would be no sunshine that December day. But when I stepped out, I realised that it was a lot warmer than it is in the last month of the year in the Ukrainian capital.

As I walked out of the Dorohozhychi metro station, Babi Yar stood right in front of me. I was told that I might see some of the Israeli pilgrims who come in large groups on full flights from Tel Aviv, but that morning, the park was eerily empty. Because of a thaw in the weather, late December felt more like late September.

It was over three quarters of a century earlier that 34,000 Jewish men, women and children were shot in cold blood by the occupying Nazi forces in Kiev (and yes, their Ukrainian collaborators). On that fateful September morning on the corner of Doktorivskoi and Melnikova streets, the Jewish residents of Kiev gathered in large number.  They were marched in groups with Nazi guards who took them to nearby large ravine of Babi Yar, where they were stripped naked, relieved of their valuables and machine-gunned to death.

The killing spree went on for the next 36 hours with the dead and those barely alive being immediate buried.  The mass grave swelled with more dead Jews and Roma (Gypsies), who were rounded up the Germans during the next few years.  While the exact numbers of people buried in Babi Yar is unknown, historians believe the figure to be 100,000.  When it was clear that the Allies would win the war, the occupying forces in Kiev exhumed the bodies using bulldozers to destroy the mounds. The decomposed corpses when then doused in gas and burned to destroy evidence of the killings.

Several books about the massacre were published in the following decades with the first, Ilya Ehrenburg’s The Storm coming as early as 1948.  The only Jews in Kiev who managed to survive Babi Yar were those who hid their identity, such as the family of Yelena Gordetsky who now lives in Australia and spoke of the massacre to the local media.

As I looked up to see an every so tiny patch of sunlight, I realised that it was probably on a day when the weather was exactly like this that the first massacre took place.

On this grey Saturday morning, the only people visible in Babi Yar were locals who ignored signs that forbade them from walking their dogs in the park. I wondered whether mothers would take their children in strollers for a walk on the well-landscaped park when the weather was warmer. Is it possible to enjoy a stroll in a place, which was the staging point for one of the darkest acts of humanity?

Awareness of the massacre spread in the Soviet Union and beyond thanks to Russian poet Yevgeny Yevtushenko, who in 1961 wrote a poem titled Babi Yar. The poem inspired the great Dmitry Shostakovich to write the Babi Yar Symphony Number 13 in B-flat minor (Opus 113) a year later. There are a few small monuments in the territory, including a Menorah-shaped monument.

76 years after the massacre, an air of gloom reigned supreme over Babi Yar. As cooler breezes started blowing towards me, I could sense pain, fear and hatred at a very subtle level. Was the mind playing tricks on me or could I hear some kinds of screams? Could I sense the sounds of gunshots being fired at a level beyond the five senses? Were the images that were playing in my mind the result of reading a lot of books and watching a lot of movies about the Holocaust?

The more time I spent in Babi Yar, the more real the sounds, the screams, the air of torment felt. How often do these kinds of scenes replay themselves on the site of a massacre? Would people who walked in the park every single day feel it as much as a one-time visitor from the tropics?  As I walked to the higher point of the park, I crossed paths with more dog-walkers and their canines. Perhaps this was just another park for a few people… Perhaps my own senses were just too heightened to not notice what happened here on those two dark September days.

Seven and a half decades later, probably every single perpetrator of the massacre has joined the victims in the grave. Does the subtle torment come from both victims and perpetrators of the massacre? The liberating forces of the Red Army that evicted the Nazis from Ukraine and marched on to Berlin are sure to have taken down some of those who murdered Jews in cold blood in September 1941.  Even those Nazis who managed to survive the war and live normal lives for decades would have lived with some degree of guilt and fear of retribution and judgement.

My sympathies have and always will be with the innocent Jews who were massacred at Babi Yar, but at a subtle level, the torment I could sense at the site of the massacre came from the very perpetrators of this dastardly act.  While alive no religion or belief system they possessed could have ever justified their actions or even made them believe that they were beyond judgement.  Are their souls reliving their sins in another dimension?

Shaken by every single thought and emotion that ran through my system, I left the park from another exit and found myself totally lost. As I walked on a road parallel to the park, I saw a road sign showing that Zhitomir, Kovel, Lvov, Odessa and Lugansk were all in the same direction. As a geography fan, I knew that those places were in different parts of Ukraine, but I was too disturbed to think that there could be a common point from where the road to Odessa diverged from the road to Lvov… It felt like the world was spinning or at least my head was spinning and that there was no north, south, east or west, no past, present or future.

Fortunately enough I met a middle-aged woman on that pavement and asked her how I could get to the metro station. She smiled and directed me to the Dorohozhychi station. As I thanked her, she wanted to just be sure that I was fine. “It’s just the whole feeling of being in Babi Yar,” I replied, to which she nodded.

Within less than 20 minutes after I left the site of the World War 2 massacre, I  looked out of my 13th floor hotel room at the church domes of Kiev. By that point, I was back in the 21st century and the Holocaust and the Second World War seemed to feel like historical events, not something I lived to face.

My own country, India has been the site of a lot of violence, and death, some of it accidental. Yet unlike Babi Yar, life has grown over the points of massacres or accidents. Such places have changed beyond belief to accommodate the country’s exploding population. Despite the fact that almost every family in the Indian state of Punjab has a tale to tell of the bloody partition of the subcontinent and the ethnic cleansing that took place in the state that followed India’s division, the state moved on in a hurry with a population boom and new constructions changing the face of cities like Amritsar. It’s next to impossible for a visitor in 2018 to feel the impact of the rivers of blood that flowed in Punjab in the 1940s. Babi Yar, on the other hand, has more or less been left in peace.

As an agnostic who tries his best to be rational at all times, I have no answer for what I felt I “witnessed” when I visited Babi Yar.  Are tortured souls from another dimension trying to reach out to us? Can we help them? Those are answers that I don’t have.

I perfectly understand what the poet Yevtushenko felt when he penned these words:

“Wild grasses rustle over Babi Yar,
The trees look sternly, as if passing judgement.
Here, silently, all screams, and, hat in hand,
I feel my hair changing shade to gray.
And I myself, like one long soundless scream
Above the thousands of thousands interred,
I’m every old man executed here,
As I am every child murdered here.”