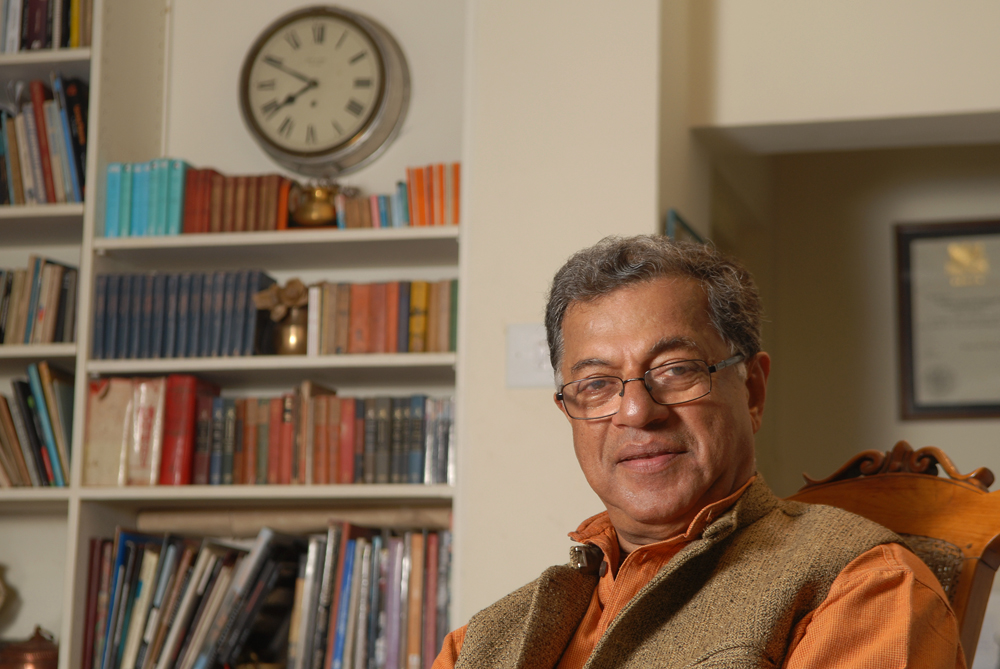 
“You have to translate his Kannada into Kannada even though he simply translates what he writes in English. And he has the gall to call himself a Kannada playwright!” fumed a fellow writer, trouncing Girish Karnad (1938-2019). Another announced that though (Chandrashekhara) Kambar and P Lankesh were better playwrights, Karnad overtook them because of his “western glitz”. A third sniffed, “He appeals to pseudo-intellectuals and pseudo-liberals, being both himself!” According to all three, Karnad fooled all the people, all the time.

When I shared these remarks with Karnad, he burst into laughter. “The only time I was upset by criticism was when veteran playwright Shriranga (Adya Rangacharya’s nom de plume) tore my first play Yayati to shreds, declaring that “the curse was not on Puru (the protagonist) but on the playwright.” This early philippic steeled Karnad to face every kind of attack in the subsequent decades as he became a nationally renowned writer/playwright, critic, translator, actor, film and theatre director, cultural interventionist, and administrative head of apex cultural institutions such as Director, Film and Television Institute, Pune; the Nehru Centre, London; and Chairperson, Sangeet Natak Akademi.

What would Karnad have said about an obituary by a long-term detractor describing him as ‘an outstanding political pamphleteer, artful dodger, fine actor, a mediocre director and a terrible playwright’? I guess he would have chuckled. He might have added mischievously, “Not a fine actor!” (He once told me that he became a “moderately good actor” by default and habit, debuting in the cult film Samskara (1970) “because there was no money to hire a professional.”) However, as a loud, lifelong champion of democratic values, he had given attentive respect to dissenting voices, supporting freedom of speech so long as it did not instigate hatred. In his plays he accommodated contradictions socio-political and psycho-spiritual. He examined violence, oppression, deception and self-deception, leaving us free to navigate ambiguities, discover consequences.

Once I asked him why, in his major works, he opted for myth, history and folklore to expose individual and collective dysfunctionalities. Wouldn’t it have been easier to plunge into the whirlpool of contemporary life, as the Marathi playwright Vijay Tendulkar did? It was Tendulkar (who was present) who answered, “Girish was groomed in the world of myths, just as I grew up in a chawl and encountered the seamy underbelly of a metropolis.” Young Tendulkar had seen a street fight where a man was smashed with a bottle. For young Karnad, that shuddering impact came as he witnessed valiant Abhimanyu mangled by multiple warriors on the Yakshagana stage. He found tragic dilemmas as he wandered through world myths, in ancient Sophocles or modern Anouilh.

Karnad did not grow up in an urban setting with an English-bound lifestyle, but on remote Sirsi by the Western ghats, at home in mother tongue Konkani, Kannada and Marathi. It was “medieval India. No electricity. Our house was at the jungle’s edge. If our dog had puppies, panthers came and stole them. Once I was on a crank-start coal bus which came to an abrupt halt and stayed still until the tiger blocking us on the lonely road decided to move away.” The local areca plantation owners were literature loving and theatre mad, hosting troupes of Yakshagana theatre, company nataks and hari kirtan. This world resounded with rehearsals and performances.

Fired up by the grandeur of such spectacles, the boy wanted to be “great and famous”. Mathematics was the subject in which to secure full marks, a first class, university rank, “to get out with a Rhodes scholarship… (as) India was finished!” When he began to draft his first play Yayati (1961) enroute to England where he would study political science and philosophy, Karnad could not have imagined that he would end up as an architect of modern Indian drama alongside Badal Sircar and Vijay Tendulkar. With no predecessor or guide to show the way, he probably saw playwrighting as tackling a theorem where “[y]ou begin with equilibrium: it is broken. You strive to reach the next equilibrium.”

In Yayati, fledgling Karnad resorts to periphrastic dialectics as the royal father exchanges his old age with son Puru, exploiting the son’s craving to find self-worth in filial duty. A natural outlet for a young Karnad breaking out of the family stranglehold for the first time. But what intrigues you is how the debut play explores gender politics with the voices of three entirely different women. Yayati’s wives—one a brahmin, the other an asura slave princess, and Puru’s bride who finds release in suicide—all struggle to register their identities in an asphyxiating male cosmos. Mature Fire and Rain (1994) turns a dogmatic moral allegory from the Mahabharata to question patriarchy. Arrogant, self-seeking knowledge becomes annihilating fire, while humility, forgiveness and compassion bring rejuvenating rain. In both, the playwright strips pauranic stories of their maudlin crust. Surrendering bhakti yields to relentless intellectual scrutiny. As characters circle the truth, audiences discover that they must grapple with protean shifts of meanings in the play—as in life.

So it was when the Sangeet Natak Akademi centre staged folk theatre. Homi Bhabha Fellow Karnad revamped flamboyant folk devices to his own new purposes in Hayavadana (1971). The late actor Bhagirathi Narayanan recalled this tumultuous ride: “No one had seen anything like it! A metaphysical German novel based on a jaunty Indian folktale transcreated into a psychic probe for the modern stage!”

This is one of the plays in Karnad’s oeuvre where a range of resonances, often unpredictable, remain unaffected by linguistic transference. I saw Broken Images (among his last—but not best—plays set in contemporary times) repeating this feat in Kannada, English and Hindi— perhaps because it raises a disturbing language issue: can an Indian writer get international recognition only if she writes in English? It achieves a razor’s edge technical coordination between the flesh-and-blood actor and her screen image.

Nagamandala (1988) too works in several languages with meanings intact. Here, as Chicago University’s playwright-in-residence, Karnad interwove two folk tales, narrated to him by his adored “hero, friend, guru,” the poet scholar AK Ramanujan. In sharp contrast to Hayavadana, Nagamandala dismisses cerebralisation and evokes the felt-in-the-blood mystique of a primeval folk imagination. Here supra and infra human powers are matter-of-fact realities. However, the reliance on visual flamboyance in directors from BV Karanth to Neelam Mansingh Chowdhry has tended to iron out the play’s pluralities.

The playwright turns prophet with masterwork Tughlaq (1964), transforming a slice of history into a modernist fable. Planning to be the ideal ruler, a brilliant Mohammed bin Tughlaq launches madcap schemes ending in carnage, corruption and collapse. Karnad’s contrapuntal soundscape has historian Barani witnessing the fall, and a macabre Tweedledum-Tweedledee (Aazam/Aziz) parodying character and action. This chiaroscuro of irony, scepticism and searing humour climaxes on a Faustian moment. Grace fades beyond recall, as the muezzin’s dissolving prayer disorients the lost king.

It is well known that Karnad’s Machiavellian drama reflects the playwright’s “disillusionment with the new politics of independent India, the erosion of ethical norms” in the Nehruvian era. Pungent dialogues release the stench of realpolitik hypocrisies. And like Tendulkar’s Ghashiram Kotwal, this work takes new avatars. As the pretence at socialist secularism yielded to emergency proclamations, state-supported, minority-targeting atrocities, and rightwing fundamentalism, Tughlaq morphed from Ebrahim Alkazi’s spectacular Purana Qila pageant to postmodern sparseness in claustrophobic space. What next? A pasquinade of puppets?

Karnad laid trendsetting tracks in the New Wave films of the 1970s, and continued to win awards through subsequent decades in mainstream and parallel cinema. On the sets of Kanooru Heggadathi (1999) where I noted his directorial attention to detail, he said, “A good script makes a low budget film succeed…Not that there’s any other option!” He found it easier to shape a convincing script and film when it was based on a great work of literature like UR Ananthamurthy’s Samskara, while SL Bhyrappa’s novel Vamsha Vriksha was “so good” that it rose above what Karnad described as inept direction by himself and BV Karanth, to win a slew of awards.

Quick to acknowledge how influenced he was by contemporary writers, artists and scholars, Karnad felt free to engage in spats with some of them. He questioned Ananthamurthy’s views (“Brahminical in judgements”), and Bhyrappa’s knowledge of history when the latter criticised Karnad’s radio play Dreams of Tipu Sultan. He ranted about VS Naipaul’s anti-Muslim credos, and called Tagore a second-rate playwright. As political activist and cultural crusader, at no time did he betray fear in opposing everything fascist, communal, divisive, not even in the face of death threats. The more strident the opposition, the more logical his articulation.

We saw Karnad creating a furore with remarks about Tipu Sultan which gave the right wing a chance to denounce him for turning a “tyrant into a tiger”. And suddenly this radio play about the Sultan—no literary masterpiece—acquires a new importance. As much as Tale-Danda (trailing mandir-mandal shadows) or Rakshasa Tangadi (questioning the simplistic reading of the Talikota battle as a Hindu-Muslim conflict), The Dreams of Tipu Sultan reminds us that we must fight against falsification and communalisation of history.

Karnad was accused of intellectual arrogance. True, he suffered no fools. But he could put an unsure journalist at ease with casual spontaneity. He once said to me, “You’re wearing blue! Azure? Cerulean? Cobalt? Aquamarine?” and went on to discuss the problems of choosing the right word, especially for journalists panting against deadlines. He gave remarkable freedom to directors. Overlooking fledgling incompetence, he reserved reproval for the seasoned—like Alkazi (for making a mess of Beheading), Vijaya Mehta (for a fake Nagamandala) and Prasanna (for deleting a segment from Fire and Rain). Retrospection brought regret, “Any group doing theatre takes so much time and effort that we should not reproach them.”

Long ago, theatre historian Shanta Gokhale twitted me, “How could you not fall in love with young and handsome Girish Karnad who was working in your city when you were in college?”

I replied, “I was not smart enough.”

Now that he is no more, I realise just how much I—and all the others who came into his orbit—prized him. When his name was announced for the Jnanpith award Karnad exclaimed, “This should have gone to Vijay Tendulkar. No one has ever made you experience as he has done the elemental emotions of our age—a chilling disgust, bibhatsa, and just what it means for the powerless to be crushed by humiliation.” I think Karnad will be remembered for making us aware of the need to stand up for the oppressed, for questioning the status quo, keeping doors open for meaningful debate even with rabid opponents, for the wisdom to recognise that ambiguity can strengthen, and truth may inhere in paradox.

For Girish Raghunath Karnad, humanity was no abstraction, but the good and bad people he met every day—the characters who helped him make sense of the world, the fellow humans with whom he walked on planet earth.