Eating what our ancestors ate 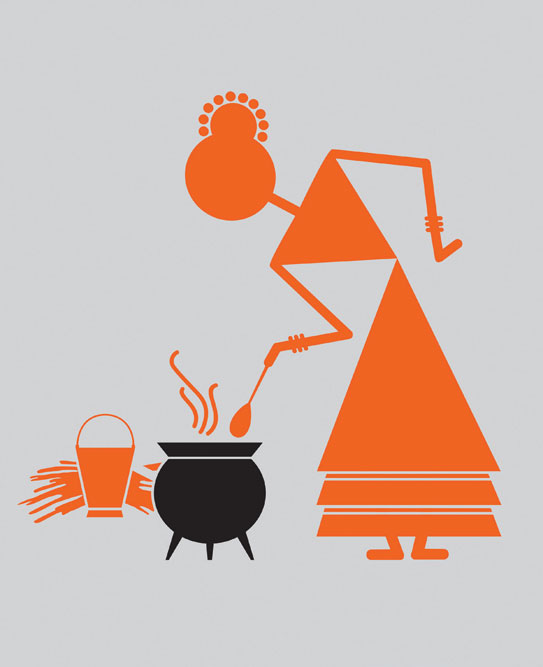 
DIABETICS, I THINK, tend to be gourmands. A gourmand is one who takes pleasure in eating fine food. When it is mortally dangerous for you to exceed an intake of 1,500 calories a day, each morsel you eat has to be savoured. This, at least, is true of my mother, a long-time diabetic on insulin. A balanced taste in a dish is crucial for her. If it is under salted or overly spicy, or if in a restaurant, pasta aglio olio has not been prepared perfectly, it is akin to having fasted for a meal. So, when a chef writes a cookbook for diabetics, expectations are high that the results will appease these super gourmands.

Michael Swamy’s new book The Diabetic Cookbook (Bloomsbury) offers a medley of dishes in interesting combinations. A long-time chef, Swamy poses the fundamental question of our times. How do we define fine food in a manner that is not detrimental to our health? And to the health of the natural world we live in? Swamy advocates a more responsible way of thinking about and eating food. “What the modern cook or diner needs to know is that talking about food is not just talking about recipes; it’s talking about the geographic nature of an ingredient, its seasonality and the changes that happen in one’s body during each season.” He calls for a re-connect with the mores and habits of our ancestors and a re-look at their philosophies such as using copper and iron vessels to cook, eating organic produce, avoiding sugars, processed foods and trans-fats. “What most have to return to is the cooking of grandmothers and our forefathers. They had knowledge of the seasons and local foods that were good for their bodies and systems. Foods from distant lands did not necessarily mean it suited everyone.”

A National Geographic article entitled Evolution of Diet points out, there is a twist to “you are what you eat”. More accurately, you are what your ancestors ate. Even more accurately, your body is conditioned to absorb only what your ancestors ate. Just like the variation in our colour, race, and genes, our propensity to thrive on some foods rather than others depends on genetic inheritance. As Stephen Le, author of 100 Million Years of Food: What Our Ancestors Ate and Why It Matters Today says, if we add dairy to dairy-less cuisines, or remove dairy from dairy-dependent cuisine, then we risk running into nutrient imbalances because creating a tasty balanced diet from scratch is a lot tougher than eating something that was tested over hundreds of generations. So, Swamy is right to call for a return to combinations favoured by our grandmothers.

Is Swamy right that by embracing a holistic diet, it is possible to return to a state of optimal health, and even reverse diabetes? We can’t glean an answer immediately but we can test his recipes on blood sugar levels of a long-time diabetic.

I promptly asked my mother to try the recipes and then test her blood sugar levels after eating the dishes. Her daily intake cannot exceed 1,200 calories. She is vegetarian, so in different meals and combinations, she tried the carrot and ginger soup, the bonda soup, oats dosa (she has her own recipe too), couscous upma, lentils with drumsticks (a variation on sambhar with drumsticks), lentil and millet dosa, and thepla. All of them were successful—the dishes, she reported, were tasty and they did not increase her blood sugar to dangerous levels. Some, like the oats dosa, when eaten for dinner, helped to keep the blood sugar at normal to low levels the next morning, which is wonderful news for a diabetic because it allows them to eat an occasional snack of fried food like pakoras. 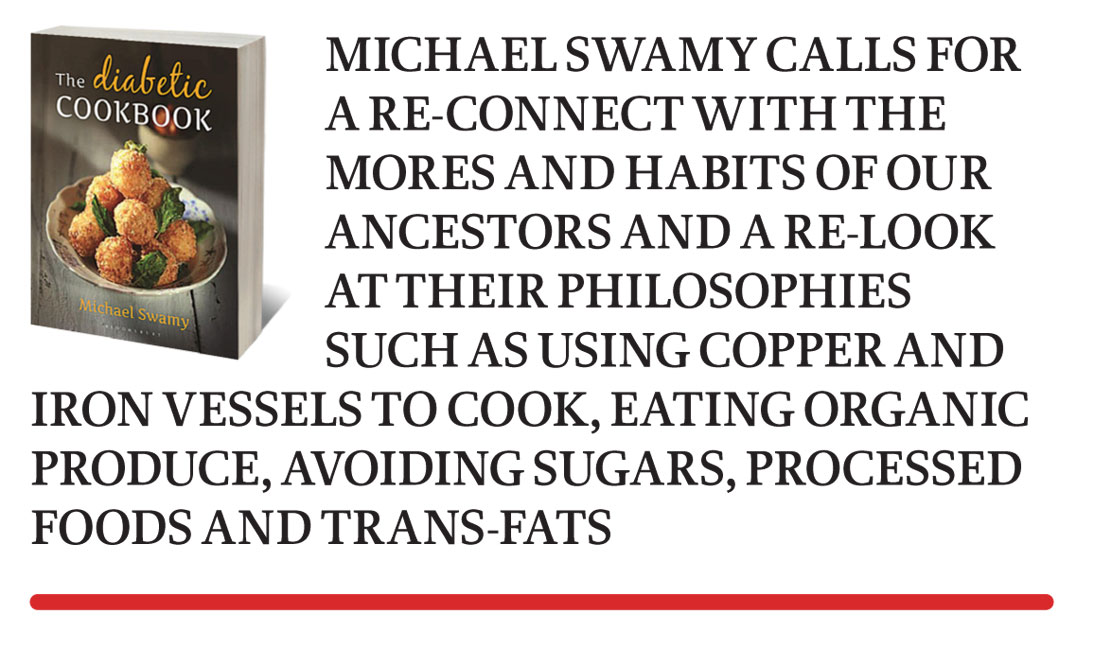 The ingredients in Swamy’s recipes are responsible for this overall healthy outcome. Many of the recipes call for coconut, tamarind, and drumstick, which have anti-diabetic properties according to studies. Coconut is low in carbs and rich in amino acids, healthy fats and fibre. One study on rats found that coconut had anti-diabetic effects, possibly due to its arginine content. Arginine is an amino acid that’s important for the functioning of pancreatic cells, which release the hormone insulin to regulate your blood sugar levels. Another study found that rats with diabetes, when fed on protein made from coconut, were better off than their cohort who didn’t eat coconut protein. But the downside is that coconut, being high in calories, has to be used in moderation, which Swamy does in his recipes. For instance, couscous upma has one tablespoon freshly grated coconut.

Tamarind is another favourite ingredient. In an article on the link between tamarind and diabetes control, a dietician points out that tamarind pulp is rich in magnesium, which plays a crucial role in regulating blood sugar by increasing insulin sensitivity. However, there have been too few studies on humans to make the point about tamarind’s positive properties in controlling diabetes.

Drumstick (Moringa oleifera) has anti-diabetic properties. Moringa leaves have a low calorific profile and are rich in minerals like calcium, potassium, zinc, magnesium, iron and copper. In an article in Food Science and Human Wellness, Lakshmipriya Gopalakrishnan and others refer to several
studies demonstrating this effect.

Diabetics have to be very careful about carbohydrates, particularly starchy foods such as bread, rice and pasta. Swamy uses quinoa and couscous as a substitute for rice. He draws on traditional recipes from the south, Goa, Assam etcetera to
create his own spin with diabetic-friendly substitutes.

A missing ingredient in Swamy’s recipes, however, is the information on the calorie count of the dish. A diabetic has to count calories and usually cannot exceed 1,500 calories per day. Perhaps this lacuna can be remedied in a reprint. Otherwise, it has a number of delicious recipes that are easy to cook and with a beneficial impact on a south Indian diabetic’s well-being.

INDIA HAS ONE of the highest rates of Type 2 diabetes in the world, with figures as high as 30 million in 2019 and expected to increase to over 70 million by 2025.

As leading diabetologist V Mohan points out, obesity and increased visceral fat due to physical inactivity, and consumption of a high-calorie/high-fat and high sugar diets are major contributing factors. There is also strong evidence that Indians have a greater degree of insulin resistance and a stronger genetic predisposition to diabetes. In addition to affluent urban Indians, as people move to urban areas for jobs, there is growing evidence that Type 2 diabetes also hits these migrants. The solution is simple. Reduce your tummy.

In the pocketbook Your Simple Guide to Reversing Type 2 Diabetes, Roy Taylor points out that each person has their own personal fat threshold, and if your weight has increased quite a lot above what it was at 21 years, then you risk getting Type 2 diabetes. The onset of the disease had little to do with obesity, and more to do with whether you have increased your BMI by three or more units since you were in your early 20s. In fact, studies have shown, he says, that three quarters of extremely obese people with a BMI of over 45, do now suffer from Type 2 diabetes.

In layman’s terms, how much fat you can store under your skin before it starts squishing the liver and pancreas (which provides insulin and is behind the stomach cavity) determines your risk level. Taylor says, your Type 2 diabetes is caused by less than half a gram of fat inside your pancreas. Look at your belly and see if you have a paunch. His solution: rapidly decrease body weight by two and a half stone (15 kg), which then will take most people below their personal fat threshold. Those below 80 kg can aim to lose about 9 kg. So how do you achieve this rapid weight loss and keep it off? He advocates cutting calorie intake to 700 per day and in the first eight weeks switching to a liquid diet, and not embarking on an exercise programme in this period (tends to impede weight loss). Oh, and no alcohol. In the first week then, the average weight loss is 3.5 kg. While Taylor’s recipes are geared to the British palate (and ingredients), it is important to understand that those may not work for us.

For figuring that out, it is important to return to Michael Swamy’s and others’ injunction to eat what your body can process, to the ingredients and dishes perfected by your grandmothers.