Modi's meeting with the Pope was picture-perfect, and it could not have been otherwise 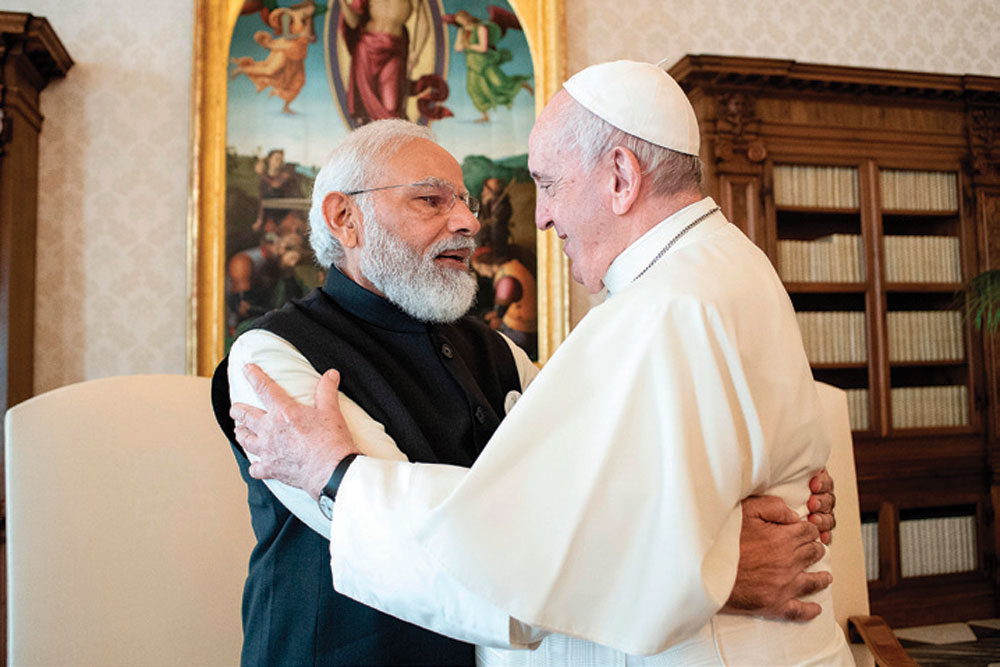 
THE POPE WELCOMED two high-profile guests last week at the Vatican, and those images of warmth and blessings in the overwhelming backdrop of Catholicism’s highest church pleasantly contradicted the portraits made of the visitors at home by their usual critics. For President Biden, the second Catholic to occupy the White House, it was a validation badly needed after his pro-abortion political position. Go and continue to take Communion—God’s apostle didn’t heed his American minions. For a president with alarmingly shrinking ratings, it was divine consolation, and it took a setting other than Capitol Hill for him to regain presidential aura. Some leaders look good abroad, and some only abroad. From Rome to Glasgow, for him it was all about playing the leader of the free world, before getting fettered at home soon.

Prime Minister Narendra Modi came to the Vatican with a heavy baggage of symbolism as the leader of Hinduism’s homeland, and at a time when his party was being increasingly portrayed in international media as incendiary and polarising. In the West today, Hinduism is popular not as a cultural study but as a ballast to nationalism, and the prime minister, perhaps the most popular leader in an authentic democracy (the adjective matters), is invariably caricatured as an elected autocrat from a country without justice, in the league of such populists of manufactured eternity as Putin and Erdogan. In the storytelling from ‘one of the most wretched places on earth’, freedom is not a democratic choice for those who don’t ‘belong’, and constitutional illiberalism is the legacy of the Hindu strongman. Maybe his natural flamboyance can live with the hyperbole of dissent. Out there in the hallowed precincts of international summitries and schmoosing sessions, he matches conviviality with authority—the wise man from the East with a lighter touch. The meeting with the Pope was picture-perfect, and it could not have been otherwise for a natural on such occasions.

Religion and power came together in that image of contrasts and conciliations. Pope Francis presides over a church that is done with political battles, and the rock of Peter survived without cracks. There is no call of redemption from the last outposts of godforsaken ideologies. The crusader’s march was abandoned long ago. The church’s last political triumph was in 1989, when God’s version of socialism defeated Stalin’s across Eastern Europe, and it all began with Pope John Paul II’s visit to the Gdansk shipyard in his native Poland. Today’s battles are cultural, and biology is not always compatible with the demands of spirituality, which is one reason why the abortion debate won’t go away from secular societies with a Christian foundation. Their quarrels are about issues concerning modern living, not about the fundamentals of identity or ancestry. Unlike other Abrahamic religions, Christianity is at peace with itself, in spite of the cultural stirrings within, whereas others are steeped in the anxieties of identity—they define themselves by repudiating the others. The word Christendom may not be politically appropriate; it’s a fact that doesn’t make politics or people defensive about their backstory either. Papal power is politically tenable, and it’s not a dispute.
The Pope’s visitor is the most powerful expression of a political culture that draws its ideas of nationhood from what’s considered to be the world’s oldest religion. Hindu nationalism, in its rhetoric of triumphalism, may claim ownership over a rich civilisational heritage, but its interlocutors have not stopped arguing about “Who Are We?” Is it a sense of intellectual insecurity or an attempt to deny some Indians the luxury of Indianness or a lack of scholarship (best illustrated by discovering Bharat without knowing Sanskrit) in the study of the past? The question of still-undefined identity is a political arrow, and it’s increasingly deployed by those for whom the past is a permanent dispute. In politics, dividends come from not civilisational memories but grievances, and Hindu nationalism tapped into it—and succeeded.

Modi is its sobering face, and that is why the photo-op at the Vatican looks natural. He didn’t paint himself differently to blend in with the atmospherics of tolerance and generosity. It was very much Modi, with no extra choreography required to play the reconciler from the East. After all, the mascot of Hindu nationalism does not use the H word at all in his stump speeches. Unlike some of his colleagues, he does not feel the urge to play the aggrieved Hindu still struggling for justice in his karmabhoomi violated by secularism. His rhetorical flourishes are reserved for turning governance into a never-in-a-hurry moderniser’s campaign for the future. If it’s occasionally lost in the noise of the base, its grievances still intact, blame it on the cultural disruptions a change of this magnitude can bring about.

The confident Hindu, culturally as well as politically, was bound to enjoy the company of the Pope, as today’s visitor and tomorrow’s host.

The Wealth of Ideals