Revelations from a gustatory gambol across the world 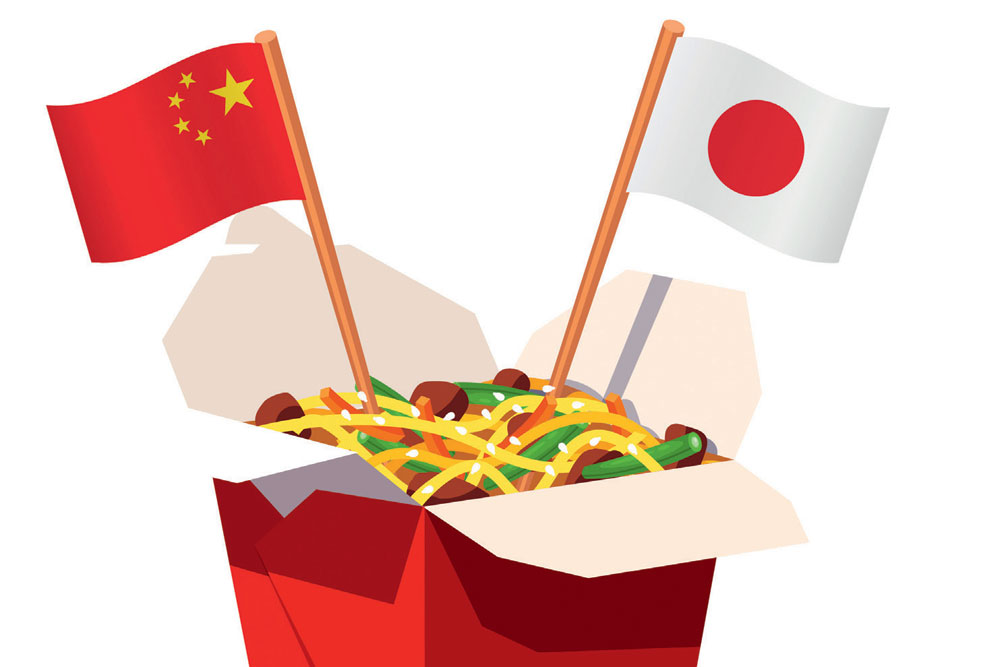 
IN ANY TAXONOMY of identity—of the self or nation—food occupies central ground. Veg or non-veg is a deeper question than the surface of the words implies. Small wonder that at the heart of many a culture war lies food: its belonging and naming are contested the world over. Are French fries Belgian or French? Is Ramen Japanese or Chinese? Is Chicken Kiev Ukrainian or Muscovy (or Marks & Spencer’s frozen food aisle)?

The answers reveal a treacherous negotiation between invention and tradition. While geographical indicators might be a useful weapon in the global trade negotiations arsenal, their validity as markers of identity is almost always questionable. The origins of food, like those of ideas, tend to reveal a mongrel mishmash that resists ownership.

The Global Sutra takes a gustatory gambol across the world to demonstrate the point.

We begin with afternoon tea in England. This tradition, as ostensibly British as the Queen, could not have existed without the tea grown in India, which in turn owed its existence to cultivation methods stolen—quite literally—from China.

The first tea estates in India were set up in Assam in the 1830s. But these truly took off only after a Scottish horticulturalist, Robert Fortune, undertook a large-scale tea heist on behalf of the East India Company. In 1848, Fortune stole and smuggled out about 13,000 plant samples and 10,000 seeds from China, via Hong Kong and on to Calcutta, enabling tea farming to become firmly established in the subcontinent.

The rest is history and abomination, as chai tea latte has become ensconced in Starbucks’ global menus. But tea is far from the only Indian staple to have crossed borders to surprising ends.

A contender for Japan’s national dish is curry, so much so that the Japanese navy even has a “Curry Friday” tradition, where all navy canteens offer curry and rice as Friday lunch. But Japanese curry bears only a superficial resemblance to its Indian ancestor. It is more glutinous in texture, usually mixed in with wheat flour. It is also sweeter and includes interloping ingredients like apple and honey.

The dish in Japan, in fact, dates to the 1870s, when naval officers of the British Royal Navy who had picked up the curry habit in India, passed it on to colleagues in Japan’s imperial maritime forces. The earliest recipes for raisu karei (literally, rice curry) in Japanese cookbooks were lifted from the 1861 Mrs. Beeton’s Book of Household Management, whose curry ingredient lists invariably included curry powder, flour, and chopped sour apples.

Since the novelty dish came from Britain as far as the Japanese were concerned, curry rice was—and remains—classified as “Western.” It is, therefore, a regular item at yoshuku or Western food restaurants, where it is served in a sauceboat.

Another surprising Japan food fact is the Portuguese origins of tempura. Portuguese-sponsored Jesuits were active in Japan from the mid-16th century for about 50 years. These priests brought with them not only promises for salvation but something more useful in the here and now: batter-frying cooking techniques.

There is some debate as to the origins of the term “tempura.” One theory links it to the Latin phrase quatuor anni tempora, which refers to the Ember Days, or days in the Catholic calendar when meat is forgone, as for example, during Lent. Delicious batter-fried veggies made it easier for priests to abjure meat during the Ember Days. Another theory claims that the etymology is linked to the Portuguese word tempêro, meaning “seasoning.”

When it comes to seasonings, among the more popular contemporary condiments is ketchup—the blood-red sauce that brings to mind McDonald’s and all things American. In the US, 97 per cent of households report having a bottle at the table. Yet, the sweet sauce originated far from the Americas, in Southeast Asia.

The word ketchup derives from the Hokkien Chinese word, kê-tsiap, which is the name of a fermented fish sauce. The British, once again, are key players in this story of global gastronomy. They likely encountered ketchup (in its original form) in Sumatra and upon returning home, attempted to recreate it.

A recipe published in 1732 for Ketchup in Paste, by Richard Bradley, referred to “Bencoulin in the East-Indies” as its origin. British Bencoolin was a possession of the East Indian Company that extended over south Sumatra (modern-day Indonesia).

But today’s star ingredient, the tomato, remained absent from early versions of the sauce, which featured ingredients like mushrooms and anchovies instead. According to a piece in the National Geographic (‘How was ketchup invented?’), the first known published tomato ketchup recipe appeared only in 1812. It was written by horticulturalist, James Mease, who referred to tomatoes as “love apples.”


Japanese curry bears only a superficial resemblance to its Indian ancestor. It is more glutinous in texture, usually mixed in with wheat flour. It is also sweeter and includes interloping ingredients like apple and honey. The dish in Japan, in fact, dates to the 1870s, when naval officers of the British Royal Navy who had picked up the curry habit in India, passed it on to colleagues in Japan’s imperial maritime forces

The culinary cypher du jour is Chicken Kiev. The name smells of “continental” dining in the pre-liberalised India of the 1970s and ’80s; a veritable synonym for the starched-white-table-clothed environs of establishments like Kwality and Volga in Delhi’s Connaught Place.

The menu at these restaurants was heavy on Russian allusions: mushroom stroganoff was a star and Russian salad always had a role.

But the stroganoff sauce, in fact, debuted at the table of a scion of an ennobled Russian clan called the Stroganovs in Odessa—which is in Ukraine—thanks to a French chef, who added mustard, a favourite condiment of his country.

To roil the nomenclatural pot further, some claim that Chicken Kiev originated not in Ukraine at all, but in the heart of the former empire: the Muscovy region. And still, others say it is French. The cookbook of the iconic New York restaurant, the Russian Tea Room, for example, notes that the dish was most likely a creation of the celebrity French chef, Marie-Antoine Carême, who spent several months of the year 1818 in St Petersburg at the court of Alexander I.

Foods, as much as the nations that claim them, have geopolitical fortunes. Chicken Kiev is a prime example. Soon after Russia annexed Crimea from Ukraine in 2014, government canteens in Moscow cheekily rebranded the dish, “Chicken Crimea.” And today, as Russian troops roll into Ukraine once again, some supermarkets in the West are rechristening the buttery breadcrumbed bird as Chicken Kyiv, the Ukrainian spelling for their capital city.

If there is one takeaway from this whirlwind tour of the culinary tug-of-war that the patriotic and the foolhardy insist on performing, it is this: eat well and healthily, but keep in mind that food is truly global. Let each mouthful we take remind us that borders are but collective hallucinations. Keep your passports safe in your hands but hold the entire world (and its food) close in your hearts.

And in the words of Orson Welles: “Ask not what you can do for your country. Ask what’s for lunch.”