Travelling in time in search of the lost taste 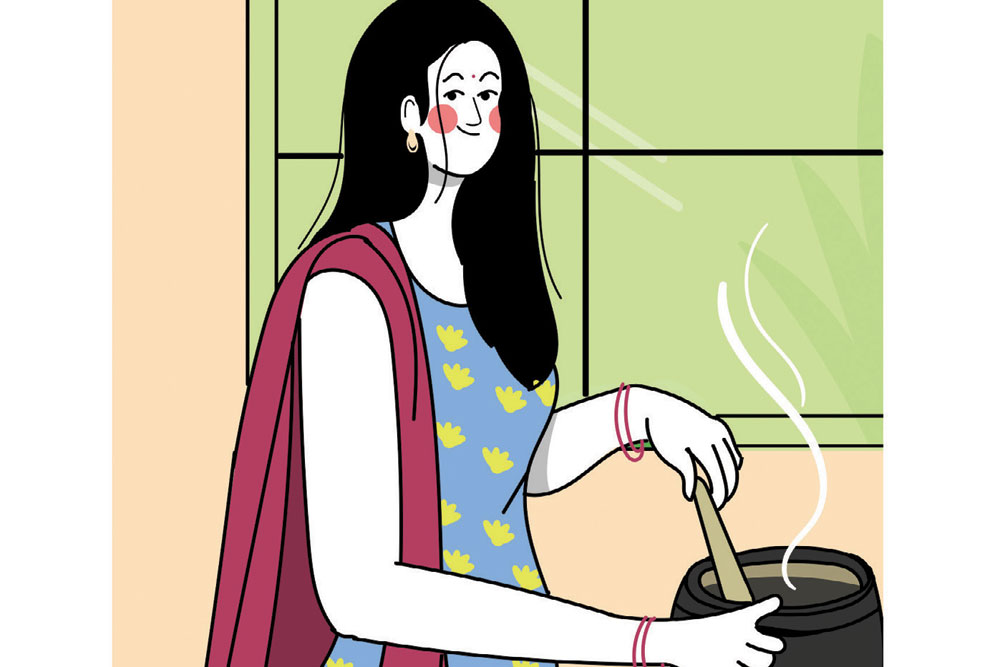 
WHICH SELF ARE YOU connecting with through food when you look back at your childhood and youth in a city where you no longer live? In A Taste of My Life: A Memoir in Essays and Recipes, (Picador) Chitrita Banerji gives us a complex and lay­ered answer by composing her memories of her selves into a menu—sundries, mains and endings.

In the sundries are titbits from her childhood, like her visit to the paan shop with her mother to buy the paan leaf. “While the vibrant emerald of a rice field or the dense, dark brooding foliage of ficus, mango and lychee trees can strike the eye with potent immediacy, the discreet tint of paan leaves laid out in layers has a subtle, hypnotic effect,” she writes. The “mini globe of his [the paan seller’s] protuberant belly” makes her think of god Ganesh. She follows it up with a lovely description of her excitement in watching the shopkeeper make shredded tobacco infused with attar and other concoc­tions for the paan.

The paan links to her memories of her mother, who carried a little book-shaped silver paan box with her blend of perfumed tobacco. When Banerji sniffs the box, she inhales the scent and memories of her late mother.

The topakul and narkel pul berries Bengali Hindus are allowed to eat after Saraswati puja evoke her transgressive qualities when the berries ripen earlier than the date of the puja. A simple topakul treat “that makes the tongue shiver with pleasure” is: pop them open, toss liberally with salt and leave on the roof or a balcony for a few days to dry out. The prose combines the east and the west in descriptions: “Biting into a jamrul is like having a warm granita,” and we immediately feel the sensation.

We have all encountered moments when we return to a place from our childhood and try to recapture a taste. In Banerji’s case, she yearns to again taste the buttery and delicate morsels of skinless, boneless chicken served between thin slices of bread in continental restaurants in the Calcutta of her childhood. When she returns as an adult and orders the dish, dense and fibrous shreds of meat slathered with mayonnaise sit on the plate in front of her.

What comes through in this delightful and thoughtful memoir is how strongly and intricately her food memories link to her identity as a Bengal Hindu brought up in a ritual-ob­servant family. The book’s spine is her bond with her parents, particularly with her mother.

In the mains chapter, the emotions and life become more complex, and so do the tastes she explores. Her father, a connoisseur of tea, allows her to taste tea when she enters college and is now a grown-up; children in her family were not allowed to drink tea. However, it doesn’t stop her and a mischie­vous cousin from drinking a concoction that mixes coffee and Nescafe into “choffee”.

Later, tea assumes significance as a way to reconciliation and forgiveness when she returns to India to meet her parents with whom she has been estranged after an unsuitable (in their eyes) marriage. Worse still, it is 1971 when Bangladesh declared independence from Pakistan, and India became embroiled in a war with its neighbour. Her husband, a Bengali Muslim from Dhaka, escapes and comes to Calcutta. His first meal there served by her mother is luchi with eggplant fritters, a potato dish, a dal, and a chilled dessert of evaporated milk infused with tangerine pulp. We learn of their complicated and prickly re­lationships: the way food connected with rituals drives people apart as much as it brings them together.

Banerji’s challenging foray into living in Muslim Dhaka as a Bengali Hindu is tackled through food. Her sense of for­eignness in a familiar landscape is captured in the under-taste of onion in familiar Bengali dishes. A poignant chapter in this section is ‘A Shared Plate,’ it begins with a discussion of a Bengali Hindu wedding. Then when she transposes her parent’s faces on the bride and groom, we embark on a ‘what if’ journey into her parents’ difficult marriage. She remembers her mother’s words: “Marriage is a lifelong commitment to eat together.”

The endings, as with life, end with grief remembered with love. Describing a memory of luchi being prepared by her mother, Banerji says the only flame she sees is that of love in her mother’s eyes.


The endings, as with life, end with grief remembered with love. Describing a memory of luchi being prepared by her mother, Chitrita Banerji says the only flame she sees is that of love in her mother’s eyes

Each page in this slim book reveals interesting titbits. Her choice of dishes for the three courses of her life also reflects the gathering intensity of emotions and relationships. In the sundries section, the dominant taste is sweet—mocha ghanto (banana blossoms cooked with Bengal gram, potatoes, spices and sugar), mithey paan, berry chutney, and narkul naru (grated coconut cooked with khajur gur). It mimics the small, sweet bites we have of life growing up. In the mains, the complica­tions of her move to a foreign land and into an unorthodox

marriage are reflected in the more complex preparations— chitol kopta, Kadam Bhai’s Duke Bhuna, lamb with posto. The dishes emphasise the fragility and intensity of memories. A Taste of My Life is a gem from a sensitive writer with a flair for delicious prose.

Chillies, Chhana & Rasa: Heritage Foods of Bengal by Nina Mukerjee Furstenau (Aleph) is, in the author’s words, a culinary story of Bengal as noted during the journey of a Bengali girl from Kansas. Here, the journey’s direction is the opposite of Banerji’s book. The author was born in Thailand and grew up in the US, and comes to Bengal for three seasons as a researcher.

As a child of immigrants, her gaze is of a Bengali American of Indian descent. Her childhood memories of growing up in Kansas blend both cultures—country fairs, ice cream and pick-up trucks with khichri in rainy weather. For Furstenau, too, the memories of luchi and other Bengali dishes are linked to who she is and how she belongs in two different cultures.

Her view of Kolkata is from the perspective of a researcher of heritage foods of Bengal. She travels with a film crew to the village of Bhandarhati to see the Ghosh family make soft cheese (the chhana of the title) for the Kolkata sweet shops. Chhana is the main ingre­dient of sandesh, a cheese made by stirring whey into heated milk in a linen-lined metal bowl. The melding of cultures is portrayed in the description of a sandesh and nolan gur cheesecake made by The Salt House. The chef mixes fresh chhana with mascarpone to create a cheesecake base, zests Italian lemon and Bengali lime (Gondhoraj) and adds mishti dahi to the top layer.

The cosmopolitan layers in Bengali heritage food come through in the interviews with Anglo Indian, Armenian, Chinese and Jewish settlers in Kolkata. She discovers the recipes for delicacies such as Kolkata Armenian Dolmades and Kolkata Chilli Chicken. Some of the iconic dishes contain green chillies, potato, and lime, and these ingredi­ents’ journey into Bengali cuisine is traced in those chapters. The recipes in this book hark back to old favourites, while some have a modern twist for those who live outside Bengal.

Economist and Nobel Prize winner Abhijit Banerjee’s Cooking to Save Your Life (Juggernaut) is, he says, about living and living consciously. It is about making choices, not always sacrificing plea­sure for “higher” goals, but also not losing sight of the connections between what we eat and making the world more liveable.

The illustrations in the book, he says, exemplify his point that each recipe is an idea, a starting point. Baner­jee’s goal is to make delicious food with ease and confi­dence, and deliciousness involves getting knee-deep in starch, fat and sugars. He is refreshingly unapologetic about preferring expensive gadgets and ingredients.

The recipes look easy to make, especially those mentioned in the hors d’oeuvre section. Masala chips involve a packet of crisps crushed and mixed with red onions, green chillies, chaat masala, coriander leaves and lemon juice. It includes Spanish inspired chickpea soup, khammam kakdi salad from Maharash­tra, cod crumble, and desserts such as Lady Baltimore cake and lauki kheer. The emphasis in the tweaks is on spicing it up or intensifying its acidic, sweet, chilli and bitter flavours.

Reading the book was like watching a well-read and interest­ing friend prepare a meal while peppering the conversation with asides on the impact of basmati crops on water shortages in Punjab, the link between constant anxiety and lack of produc­tivity, and how it is better to eat less meat but of a higher quality.

This is a book written for those who want to mull over the connections between what they eat and the larger world around them, and who want to experiment with expensive ingredients and global recipes without straying too far from the Indian palate.