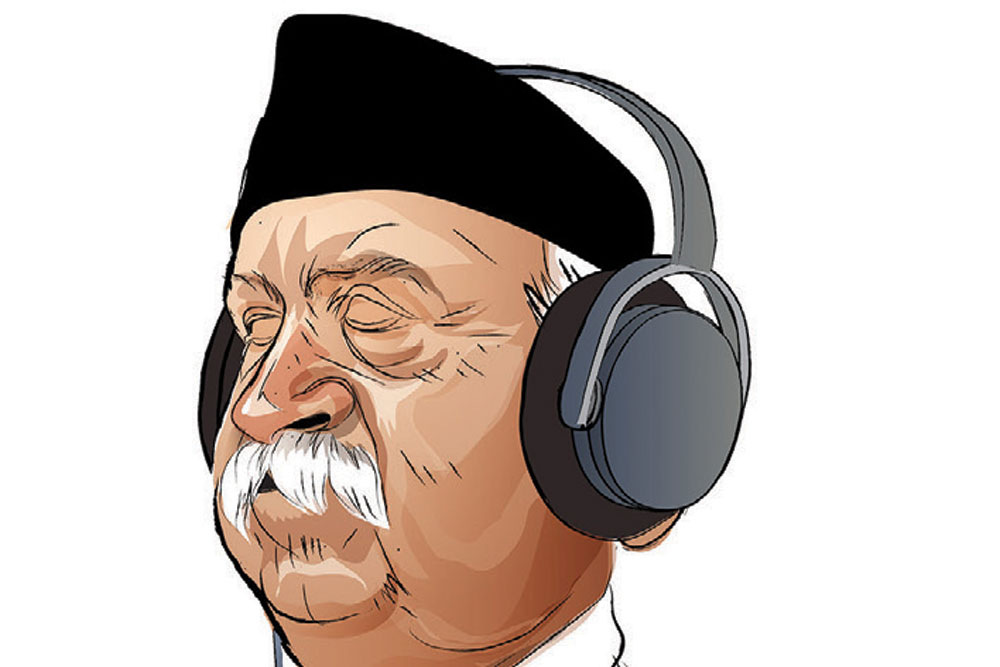 
Rashtriya Swayamsevak Sangh (RSS) chief Mohan Bhagwat leads a very hectic life. His calendar is full for a year. But what few know is that after a full day of public activities when he returns to his place of stay at night, his leisure consists of watching cricket matches and listening to old Hindi songs. Recently, he was spotted at the Delhi airport VIP lounge because of a delayed flight. He was his normal calm self without any impatience or irritation, watching cricket on the television screen there. In other news around Bhagwat, he recently held an all-India conference of columnists in Delhi. A whole-day affair, it saw an interesting presence in Odisha leader Jay Panda, a new entrant to the BJP. The buzz is the party and the RSS are slowly trying to involve him in assignments related to the media. And it is also a fact that he is a writer and columnist.

Some in the Congress are pitching for Priyanka Gandhi to be nominated to the Rajya Sabha but she is said to not be keen on accepting. In the BJP circuit, they say it is a conspiracy to stop her from active politics. If she comes with a people’s mandate by the Lok Sabha election, it will be a stronger position. It has also been speculated that in the next General Election, Sonia Gandhi might vacate her seat for Priyanka. But no one knows till then what her role will be in the party.

Former Rajasthan Chief Minister Vasundhara Raje recently vacated her official bungalow following a High Court order on facilities that former chief ministers can avail of. Jagannath Pahadia, who had been Chief Minister as far back as 1980, also had to surrender his bungalow. However, Raje is still an MLA and so Chief Minister Ashok Gehlot is trying to allot the bungalow back to her changing some Assembly rules. It is a courteous gesture to an opposition leader.

The late Arun Jaitley’s son Rohan’s wedding recently took place at 22 Akbar Road, the house allotted to the Minister of State for Finance Anurag Thakur. All the events—the sangeet, the marriage as well as the gala reception—were held there. Many guests wondered why that particular house was chosen. The family explained it had a Jaitley connection. When he left his official residence at 6 Krishna Menon Marg and went back to his personal residence, the Prime Minister allotted this house to him hoping he would recuperate and return to the ministry. But Jaitley could not come back and later Thakur was allotted the house. But he too has not moved in yet since renovations are on. Since the house was vacant, the family decided to host the wedding events here. The day saw the President, the Prime Minister and numerous VIP guests arrive. There was a separate VIP enclosure but Amit Shah chose to enter and mingle with the masses. With about 3,000 guests, every single friend in Jaitley’s vast network was called.

At 82, Bilkis Bano is now being called the ‘Dabang Dadi’ of Shaheen Bagh. She has been on protest there since December 15th. When the media ask people at Shaheen Bagh who their leader is, they often point to Bano. After the Delhi election, a few Muslim leaders, especially the Shahi Imam of Jama Masjid, tried to persuade protestors to meet Amit Shah. At one point, they even made some headway when Bano objected. Shah was only willing to meet the leaders of the protests but Bano was firm in her refusal.

Is MJ Akbar in hibernation after he resigned as Minister of State for External Affairs? Not so. Akbar remains active socially and intellectually. He has come out with a new book Gandhi’s Hinduism: The Struggle Against Jinnah’s Islam. Former President Pranab Mukherjee released it at a function that also saw National Security Adviser Ajit Doval and former External Affairs Minister Natwar Singh. Also present were Delhi’s political and cultural elite. Akbar still remains in touch with the highest echelons of the party.

Is West Bengal Chief Minister Mamata Banerjee borrowing a leaf out of Delhi Chief Minister Arvind Kejriwal’s book and avoiding confrontation with the Centre? Home Minister Amit Shah will be visiting Kolkata in March. In the past, the Bengal government often denied permission to Shah for political rallies, citing law and order problems. But there is now no objection to him. Before coming to Kolkata, Shah will be in Bhubaneswar where he has invited chief ministers from the east and the Northeast. Banerjee, who used to earlier boycott such events, accepted the invitation this time. There is speculation that Shah and Banerjee might even have a one-on-one meeting in Odisha.

In politics, as times get bad, those you thought were the closest abandon you. Rahul Gandhi is experiencing that. He had given key posts earlier to people like Ashok Choudhary in Bihar, Ashok Tanwar in Haryana, Sukhdeo Bhagat in Jharkhand, all of whom have left the party. Now very close aides like Jyotiraditya Scindia and Milind Deora are also said to be contemplating a similar move. The BJP is keeping a close watch on Team Rahul to poach if necessary.