Covid-19: Xenophobia and Tolerance in Andheri

Dispatch from a Mumbai Covid-19 hotspot 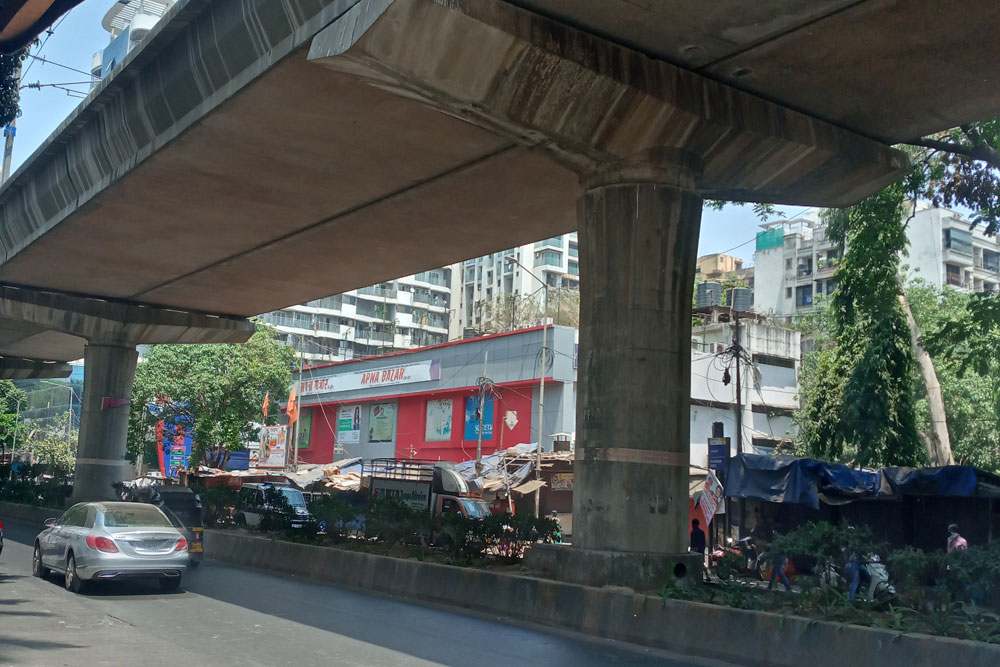 
In January 2020, when I took a close friend from Europe for an evening run in the Seven Bungalows neighbourhood of the Mumbai suburb of Andheri West, he asked me how come my locality had so many attractive Indians and foreigners.  It wasn’t his first trip to the busy Indian metropolis but this gentleman who volunteered for a NGO in the southern part of the city noticed a phenomenon that’s no longer anovelty for a local. Andheri West and Oshiwara, which together form the Brihanmumbai Municipal Corporation’s K West Ward, has been a magnet for aspiring cinema and television actors and models. They come to this Mumbai suburb from far and wide, from Rio de Janeiro to Rai Bareilly.

The K West Ward has its share of studios, agents and a large number of cafes and restaurants that are popular networking joints. Locals are used to seeing Russian-speaking models going to the fruit and vegetable markets and speaking broken English while negotiating with vendors. There are WhatsApp groups for Ukrainian models in Andheri.  It’s also easy to tell a person from the Hindi heartland apart by the accent and flawless Hindi they use.

Life took a turn for the worse for visible outsiders in this booming part of Mumbai when reports started coming in that foreigners were “bringing in” the novel coronavirus. In early March, the sound of the Italian language was enough to make cinemagoers in an elevator feel uncomfortable. Largely ignored by locals for years in this multi-ethnic haven for those seeking a big break in the glamour industry, foreigners began to notice a not so subtle change in the way Mumbaikarsbehaved with them. The occasional smile at the sight of an expat was replaced by a look of hostility and suspicion from frightened residents of Andheri and Oshiwara.

This cocktail of fear and xenophobia also found its way to the building my family has lived in since the 1970s. A week before Narendra Modi called for a voluntary curfew, the secretary of my housing society asked a member of my family if we were planning to have any more “guests from Europe.”A fortnight later when Section 144 was imposed and then the lockdown, BMC health officials politely asked me when I was last abroad (December 2019),and wanted some details of European guests I had hostedearlier this year. Two visitors of mine from Germany were in India from the middle of December and someone from Sweden came and spent the last two weeks of January with me in Mumbai. My answers satisfied the BMC officers, who called me daily to check on my health for almost a week, but some of my neighbours who don’t particularly have a liking for foreigners still viewed me with suspicion.

Not wanting to violate the ‘Laxman Rekha’ set by the prime minister, I tried to avoid stepping out of my building compound once the lockdown was announced. Some neighbours, on the other hand, rushed out in their cars and came back with six large bags of groceries (we’re largely talking of families of three!). Not one for hoarding, I tried every single e-commerce provider on the internet. The responses were the same. They couldn’t deliver to my area. This went on long enough for me to have to get out to the markets and get fruits and vegetables.

One of the busiest thoroughfares in Mumbai, Jai Prakash Road felt eerily empty. I was used to walking on these streets at odd hours, walking home from the Andheri Railway Station around 1:45 AM after getting off the last suburban local from the southern part of Mumbai. There were more people outside at that hour than at 11 AM in the lockdown. The only kirana store within a stone’s throw from my flat was shut, as was the nearby pan-beedi shop that stocked eggs, bread and quite a bit of essential items. The 600-metre walk to the nearest cooperative shop and a fruit and vegetable market was scary to say the least. I wasn’t necessarily afraid of getting whacked by a policeman, but this seemed like a scene from a zombie apocalypse film- the calm before some serious horror!

So clean was the air that I could smell the scent of the summer flowers on the trees. The near-elimination of traffic also made late-March feel a lot more pleasant than it ever has in living memory. Even a lane leading to a slum was empty. The only place where I saw people was outside two grocery stores- one a mini supermarket and the other a cooperative shop. People lined up in orderly queues and maintained a healthy distance from strangers before entering a store that limited entry to batches of five. Of course, the shelves seemed as empty as those of a government store in Moscow in 1989. Residents of the K West Ward, some of whom looked like they were hiding a beach ball inside their shirt, grabbed as many packets of potato chips, chocolates, aerated beverages and whatever else that was unhealthy. How could one blame them? Wheat, rice, lenthils and the likes were conspicuous by their absence. If these young people were going to die, they might as well have died of complications related to high blood sugar or high blood pressure!

As the days went by stores started replenishing their stocks, the vegetable and fruit vendors were also back. There was an understanding that they could set up shop from 8 to 4. Residents of the K West Ward may have looked at their light-skinned, blue-eyed and blonde cohabitants with suspicion but they appeared to pay little heed to the disgusting WhatsApp forwards that demonised Muslims. The ones who did would anyhow have to go without eggs and milk from booths operated by Muslims. They’d have to pass on bananas, pomegranate, apples and watermelon that were still being sold by a vendor who wore a skull cap. No, Andheriites were apparently not Islamophobes. On top of that they were appreciative of the cooperation of mosques that asked their faithful to pray from home. Some of my neighbours spoke with pride about how the Muslim brethren in our area reaffirmed their patriotism by banging plates and lighting candles from their balconies.

The rumours began to spread -one watchman at a time- that a building here and a building there were sealed because of someone being diagnosed as Covid19 positive. And within a few days, the BMC said the K West Ward was one of the worst affected in all of Mumbai. The names of buildings that were hotspots sounded too familiar for comfort.

All of a sudden it became apparent that all one had to do was connect the dots in K West Ward to realise that virtually the whole ward was a Covid19 hotspot.When I went out to replenish my depleting stock of vegetables, a police car stopped and asked me where I was going. The cops were polite, and I felt I was not in imminent danger of being arrested, as like any good citizen following a BMC diktat with a threat of charges under Section 188 of the Indian Penal Code, I wore a mask. My response in accented Marathi helped my cause and the cops repeated an oft-said sentence on social media that citizens were roaming outside under the pretext of buying vegetables and fruits.

600 metres from the comfort of my flat, I realised that the lockdown was very real now. The police and the municipality had chased away all the vegetable and fruit vendors and forced the mini supermarket and the cooperative shop to close. Turning to Twitter, I saw the official April 11 BMC announcement: “In order to contain the further spread of Covid-19 in  @mybmcwardKW. We are discontinuing the vegetable, fruits & other shops (except Chemist/Pharmacy) till further notice. Public awareness about the same in progress at various market & public places. It added another tweet to the thread: “Grocery shops will operate on Mondays from 9:00 am – 5:00 pm while following the rules of social distancing strictly. We expect the cooperation of our residents, those who are found in violation of these directives can be booked u/s 188 of IPC & Epidemics Diseases Act, 1897.” The tweets were applauded by 12-follower patriots, who praised the BMC.

Happily enough the next morning, the milk booths were open, and my dear skull-capped fruit vendor was also out and about. The former said that they were allowed to stay open from 7 AM till noon on all days, except Mondays, when they could continue till 5 PM.

Of course, on Monday, April 13, Andheriites lined up outside the cooperative store to stock up on essentials since the whole area was locked down and the store would only be open once a week.  The authorities probably had other ideas and the cooperative shop seems to be closed until further notice!

A day later, the honourable prime minister extends the lockdown to May 3, and even a serial non-hoarder like me feels I won’t be able to manage for that long. Back in a serpentine, yet socially-distanced and disciplined queue, I wait for an hour under the April sun. The queue virtually represents the international meting pot that the K West Ward has become. Two Kazakh or Kyrgyz women in their late-20s grumble about how it is impossible to enter a big supermarket that is 300 metres from the spot. I hear some Portuguese as well, but that’s drowned out by the noise of an art teacher who is telling an anxious parent that he can easily teach her child to paint via Zoom. As the queue moves ahead I spot labourers sitting in front of a shuttered hardware shop indulging in deep conversation in Bhojpuri. It’s close to my turn to enter the shop and then two ladies from the adjoining senior citizens queue get into a shouting match before a policewoman separates them. She reminds the shoppers to keep even more of a distance from each other.  I am finally able to get my share of wheat, grains and lentils, and express my appreciation to the shopkeeper who is well stocked. He tells me with a smile that he knew I wasn’t going to hoard aerated beverages and salty snacks. That was probably the first shopkeeper to complement me on looking fit. A good stock of vegetables would help me to stay in the right direction in that area, but alas- the police and the municipality have ensured that not one stall or cart is allowed to sell vegetables, lest citizens like me will use this as an excuse to roam outside and effectively increase the spread of Covid19!

Belarus: Behind the curtains in Europe’s ‘last dictatorship’

A White Elephant by the Ganges: A Russian bard’s fantasies about India