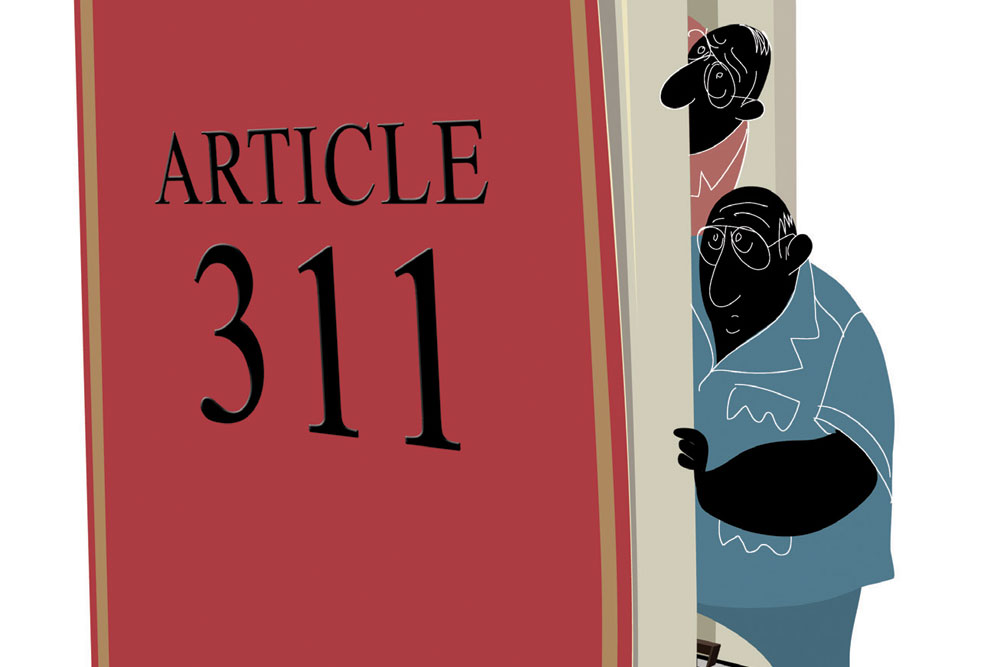 DEMONETISATION IS treating a symptom. The disease is systemic and grave, and relates to the institutionalised corruption in the vast, inefficient, wasteful and mostly ineffective administrative apparatus of the Indian state.

Consider what happened in Chennai after Prime Minister Narendra Modi’s surprise announcement on high-denomination paper currency. According to a person in the know, large stacks of Rs 500 and Rs 1,000 notes held by the corrupt, bribe-taking bureaucracy, lower judiciary and the political class, instantly turned into waste paper. Unruffled, the triumvirate responded by simply sending bulging sacks of demonetised currency notes in their possession to contractors, influential litigants, and those seeking favours, with instructions to do the needful of converting the black money into white—however this is managed— and returning the laundered funds in like amounts. Assuming, reasonably, that this modus operandi was followed in the rest of the country as well, massive unaccounted-for sums in newly minted Rs 2,000 notes in the hands of civil servants (and politicians and the lower judiciary) will help cement the new black money economy, which Modi’s efforts at cleaning up cannot touch, unless his promotion of cashless transactions really takes off. But for the entire countryside and semi-urban concentrations to go online will take years, affording the underground economy enough time to consolidate.

In the 1985 centenary celebrations of the then ruling Congress party, Prime Minister Raijv Gandhi shocked the country by revealing that only 15 paise of every rupee spent by the Government actually reached the people in the form of some benefit or public service, while the rest went into paying the salaries and allowances of those manning the administrative structure, or was lost to leakage—meaning the routine siphoning off of public funds. Rajiv’s revelations did not account for the billions of rupees in ‘black’ extorted by officials up and down the central and state bureaucracies in the process of ‘serving’ the public. Predictably, no measures materialised to curb either of these menaces then, nor have any ameliorative steps been taken since, even as these problems have worsened.

A less regulated economy and a burgeoning consumerist culture after the 1991 reforms only motivated the triumvirate habituated to swilling at the public trough to put their snouts in deeper. It resulted, for instance, in the multi-billion dollar Commonwealth Games, 2G, coal auction, Embraer and assorted other scams of the Manmohan Singh era. With much larger amounts of monies coursing through a freer and more energetic economy, the illicit part has grown bigger. According to Gurcharan Das, former head of Procter & Gamble in India, other than the import- export trade, bribes to bureaucrats constitute the single biggest source of black money today. For an idea of the problem India is facing, consider this: some Rs 150 crore is reportedly extorted daily as bribes in just the Delhi Union Territory by the Transport Department and Traffic Police. Small wonder the black economy is estimated to be as much 30 per cent of the national economy.

RK Raghavan, former director, Central Bureau of Investigation, said in a recent op-ed piece that he was less worried about the corruption at the petty functionary levels—the beat constable, clerks, et al, which he claims is ‘part and parcel of the cutting edge of the administration’ than with ‘the rising graph of graft among Class I officers’, most notably in ‘key organisations’ identified by him as Income Tax, Customs & Excise, Enforcement Directorate, and even his own agency, CBI. The problem here is two-fold. Petty functionaries in Groups C and D (in officialese), the lowest paid categories, comprise nearly 60 and 30 per cent respectively of the government workforce of some 4 million, and deal directly with people. The Centre will find it difficult to monitor and mend their corrupt ways.

AT THE CLASS I officers-end, the trend since the 1980s has been for the Revenue Services to be the top choice of large numbers of the civil service merit-listers. With entrant- level officers steeped in cynicism and with an eye firmly on the main chance, the skyrocketing of corruption is natural. Moreover, the brazenness of senior officers in these ‘lucrative’ services is a lure for aspiring civil servants. It has long been a tradition among Income Tax Commissioners, for example, for their progeny at their weddings to be gifted gold ornaments by an endless line of supplicants. Modi would really stir things up in complacent official circles were he to order, for a start, the scrutiny of assets of retired senior officers in these Services over the last 40 years, while making active covert and overt surveillance a part of Service life hereafter, considering that the existing inhouse means of checking corruption—such as Vigilance Departments and state Anti-Corruption Bureaus— are ‘a joke’, as Raghavan puts it. It was Chanakya, after all, who long ago advised his king to mount a special watch on revenue collectors of every stripe, lest monies owed the state stick to their fingers.

But what makes civil servants audacious in their corruption is the certainty of escaping punishment. The procedural and administrative hurdles hampering the conduct of investigations into bureaucratic wrongdoing and ill-gotten wealth are daunting. These are put in place by the political class because it needs the help of babus to skim the cream off government contracts and otherwise manage the drip-drip denudation of the treasury. The Congress dispensation introduced a rule requiring the CBI to seek prior approval for investigating officers above the rank of Joint Secretary. The Supreme Court in May 2014 struck it down, with then Chief Justice RM Lodha ruling that ‘It grants absolute protection to corrupt officers from prosecution’, who he argued, ‘don’t need a shield like this merely because they are likely to be harassed.’

Notwithstanding such legal constraints, certain state governments, such as the one in Tamil Nadu, have made prior permission mandatory.

The question, therefore, arises: How is it possible that Central and state governments often act in such matters against the public interest, and, far from trying to minimise corruption and increasing accountability in government, provide safety to corruption facilitators among civil servants with a slate of rules and regulations which these babus themselves help draft?

The villain is a provision in the Constitution, Article 311, which provides those on the public payroll fairly comprehensive protection. Subsection 1 of this Article states plainly that ‘No person who is a member of a civil service of the Union or an all India service or a civil service of a State or holds a civil post under the Union or a State shall be dismissed or removed by an authority subordinate to that by which he was appointed’. Subsection 2 adds that ‘No such person… shall be dismissed or removed or reduced in rank except after an inquiry’ in which he is ‘given reasonable opportunity’ to refute the charges. This pretty much precludes, in practice, any kind of punitive action. Short of treason, serious defalcation and evidence of corruption so blatant or massive that it’s hard to ignore, an accused civil servant can get away with everything else.

Moreover, the due process for dismissal or removal from service, or reduction in rank, is so onerous, time- consuming and rife with dilatory procedures that, should an accused officer take recourse to them, he can ensure he retires with full and generous pension before he has exhausted his legal options. A concerned government can, however, compulsorily retire civil servants with questionable records of probity, propriety and performance after 25 years of service—by when, of course, they would already have done their damage. This doesn’t solve the problem, but the Modi regime has used it to rid the higher bureaucracy of deadwood and corrupt officers.

Crooked and dishonest civil servants, ranging from peons to government secretaries, cannot easily be ejected from service because the CBI needs to prove their guilt when what is required is for the accused to prove their innocence—which is the lines along which Article 311 should be amended if the country is to be saved from black money-fuelled corruption.