India Doesn’t Require F-16s When it Has Tejas 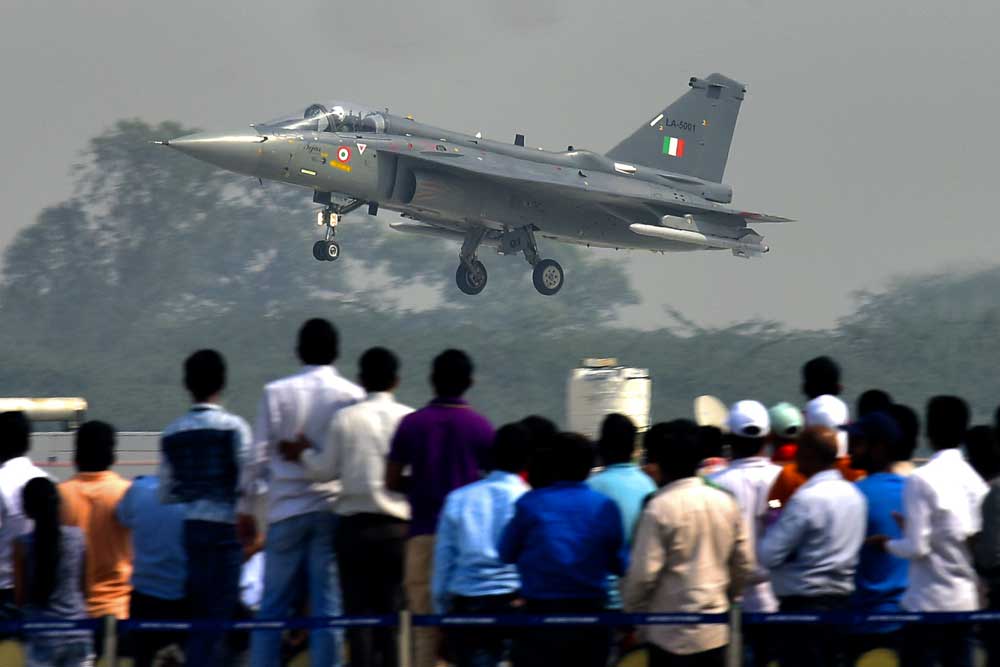 PRIME MINISTER Narendra Modi’s visit to the US to meet President Donald J Trump is now on the front burner, with an emphasis on ‘deliverables’. If Delhi is keen on easing the H1B visa regime for Indian techies, Washington is eager that Modi sign up for the fourth generation F-16, a deal seen as ‘open sesame’ for endless future transactions on military hardware, and implement the Logistics Exchange Memorandum of Agreement. If the fourth generation F-16 is the key, what does it say about India that the BJP Government is interested in an antique American combat aircraft, optimised for air warfare of the 1970s, as a frontline fighter for the Indian Air Force well into the 21st century?

The Lockheed F-16 and the Swedish SAAB (Svenska Aeroplan Aktie Bolag) JAS 39 Gripen are competing for the single-engined fighter slot in the IAF, a requirement casually conceived to fill the gap the indigenous Tejas Light Combat Aircraft (LCA), earmarked to replace the large numbers of the Russian MiG-21 as the bulk combat aircraft in the Air Force, has failed to meet. It is another matter that the delays suffered by the Tejas programme can be traced mainly to machinations to derail it, including frequent changes in specifications, and the ordering of the LCA in small batches to curtail economies of scale and deter HAL and private companies from investing in multiple LCA production lines. (See my ‘The Tragedy of Tejas’, February 17th, 2017). Despite starting with negligible technology and industrial capability, the LCA is operational, has impressed as a compact, multi-role, highly agile, fly-by-wire, 4.5 generation warplane, and can even become an export revenue earner for the country.

So, why isn’t Modi publicly hailing Tejas as a remarkable story of Indian grit, talent and technological innovation, and as a showcase for his ‘Make in India’ policy and the country’s capacity to design complex weapons systems? He should be ensuring that the IAF is invested fully in the aircraft, and that it is a runaway military and commercial success at home and abroad. Except, it turns out that, as Baba Kalyani of Bharat Forge observed at Aerospace India 2017, by ‘Make in India’ Modi probably means ‘Assemble in India’, and that too, any old piece of foreign equipment. The Prime Minister’s aim apparently is to draw American defence manufacturing companies to set up shop here, solidify India’s status as ‘major defence partner’ of the US, and use the F-16 (and possibly the Boeing F-18) to extract more ‘give’ from Trump on issues dear to him. The collateral benefits Modi espies are the firming up of the ruling party’s financial support base among NRIs in America (and the West generally), and enhancing his electoral appeal among the Indian middle-class.

It also suggests that Modi is reconciled to America not delivering on cutting-edge technologies, or committing itself to jointly designing and developing advanced armaments, a reluctance evidenced in the US Congress rejecting NATO-partner status for India and the India-US Defence Technology & Trade Initiative being a non-starter, with only technologically obsolete weaponry phased out by the US military—the M-777 ultra-light howitzer, the aged F-16 and F-18, etcetera—being offered for licensed manufacture.

The IAF has always liked the Gripen, the reason why Sweden jumped in with the E variant in the race against the F-16 Block 70. But both Gripen E, almost the same as the NG (New Generation) and Block 70, only another name for the ‘IN Super Viper’, had entered the Medium Multi-Role Combat Aircraft (MMRCA) sweepstakes, which Modi settled with his impulse purchase in April 2015 of 36 Rafales from France.

On a comparative basis though, which of these aircraft is superior? S Paul Kapur and Sumit Ganguly, in a piece, ‘F-16s, Made in India: Second Best may be Best’ in Foreign Affairs, while acknowledging that set alongside Gripen, the F-16 is ‘second best’, nevertheless argue that the American aircraft is the better buy because the benefits to India from dealing with the US, a great power, outweigh the gains from dealing with Sweden, a fairly marginal European state. Moreover, they claim, it’s a selection that will build ‘trust’ and ‘bind the two countries together’ in the larger geopolitical contest afoot against China. Allowing the assembly of F-16s in India is not the preferred option for America either, they maintain, as Lockheed would rather have India as a ‘customer’. And, after rubbishing the Tejas as under-powered, under-performing and not induction- ready aircraft, they aver that the F-16 or even the Gripen will reverse the trend of the Air Force’s supposed depleting squadron strength. But a ‘second best’ fighter plane for India in the context of the top- of-the-line Su-30s for strike missions and MiG-29s for distant air defence in the IAF inventory makes no sense unless Delhi agrees with Washington’s assessment of the Indian military as second rate and India as Third World.

An economic case for the F-16 was reportedly made by Ashley Tellis of Carnegie Endowment directly to Modi. Predictably, he greatly under- estimates the F-16 unit cost and lifetime costs, and exaggerates the size of the supposedly uptapped global market for 500 F-16s, and for spares for more than 3,500 of this aircraft operating worldwide. Also, his contention that the production monopoly of this aircraft immunises India against a US cutoff of critical items for the F-16, is iffy at best. But the knowledgeable Tellis can be convincing especially to an Indian audience predisposed to believe him.

The fact though is that with the up-front payment for the transfer of the F-16 assembly line to India and for the full complement of SKD and CKD kits for aircraft assembly, there’s no incentive for Washington not to shut down the F-16 or any other supply line at will should Delhi not conform to the contingent US policy interests. In light of Trump’s ‘America First’ outlook, there’s already some backsliding with Lockheed saying that 25 per cent of the production of F-16 spares and critical assemblies would be retained at its Fort Worth plant in Texas, which could be a precursor to its deciding that continued production of this aircraft in small numbers in the US serves its interests, just so workers don’t lose jobs and Trump is kept happy. In the event, paying an awful lot of money for a vintage aircraft and, instead of facilitating the country’s entry into the global supply chain, seeing the F-16 become an albatross around India’s neck, is a real prospect.

Then again, how does the Tejas compare with the other planes? According to the just retired LCA project chief, Commodore CD Balaji in an interview to Aeromag Asia, the LCA “is far superior to the MiG-21 in all aspects”, and “far ahead in terms of technologies and performance …to the Chinese JF-17 [flown by the Pakistan Air Force], and [is] at par with Gripen.” But which aircraft has the operational edge? In aerial warfare with Beyond Visual Range weapons, the ability to locate an adversary aircraft is of paramount importance, and here a fully loaded LCA has a lethal edge in terms of its very small radar cross section of 0.5 sq m. Relative to Gripen’s RCS of 0.7 sq m plus, and of between 3 sq m and 6 sq m for the F-16 and Rafale, the Tejas, is virtually invisible. Making the LCA stealthier still is the fact that 40 per cent of its body is made of radar-absorbing carbon composites versus 25 per cent for Gripen, and 10 per cent for F-16.

Moreover, armed with an entirely tested and proven all-Indian designed and developed ordnance suite of the Surdarshan laser- guided bomb, Astra air-to-air radar-homing missile, and outfitted with the Uttam Active Electronically Scanned Array (AESA) radar, the Tejas weapons system is powerful. The weapons (like the French Meteor missile at $5 million each) carried by Gripen and Rafale, on the other hand, are all inordinately expensive and will incur very high expenditure to obtain and periodically to replenish the weapons stocks for the lifetime of the aircraft. Further, unlike Gripen E, which has yet to pull speed taxi trials, will enter Swedish service in 2020, and whose AESA radar has tested ‘unstable’, the Tejas has logged over 3,000 flying hours, successfully negotiated the most onerous flight regimes, and proven itself in war exercises in the air defence and ground attack roles.

Notwithstanding everything in its favour, including national pride, should the Tejas be sidelined, it will perpetuate India’s status as an arms dependency and mock the country’s technological ambition. If the F-16 is chosen, it will end up reducing India to a spear-carrier for the US. Were Gripen to get the nod, then as the long-time DRDO’s resident wit, the now retired rocket engineer, V Siddhartha punned, it will be because Modi believes in ‘SAAB ke saath, SAAB ka vikaas’