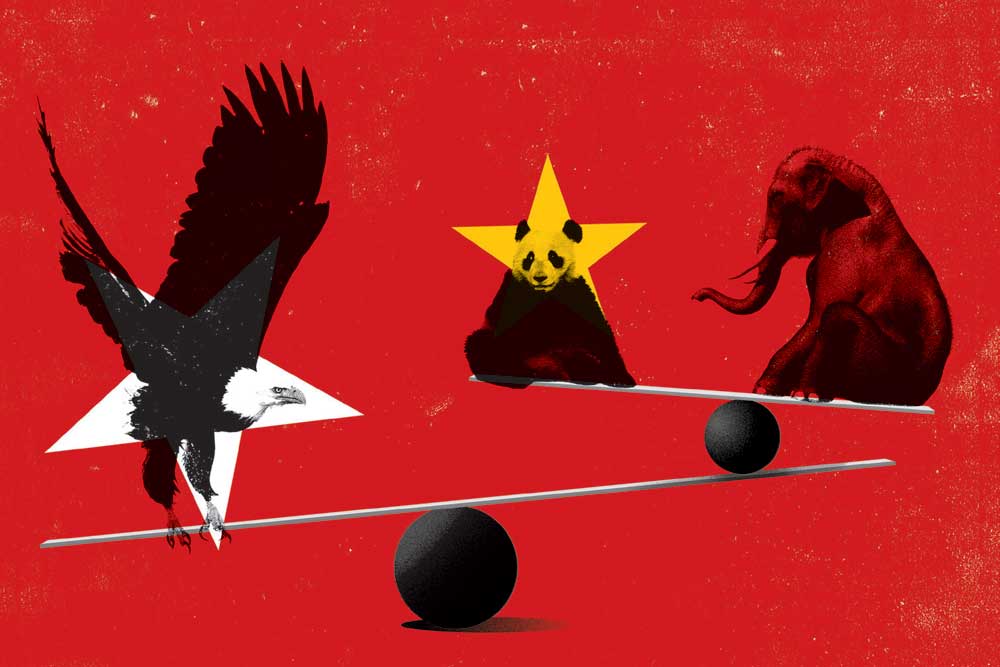 THE UNITED STATES is a ‘fading power’, China is racing to replace it at the top, and Russia has the military wherewithal to stop either of them cold, but lacks the economic heft to make it on its own. Great power politics are thus in a state of flux more than at any time in the recent past. The goal for India, in this context, should be to cobble together coalitions to deny China the upper hand on its periphery, in the Indian Ocean region, and in Asia at large while rendering the role of the US less central to the security of Asian states.

The natural tendency of the US and China as proto-hegemons is to dominate whatever groups they are part of, with lesser powers having to sacrifice their own interests and concerns. Hence, it is imperative that ‘middle powers’ cobble together strong economic-cum-security arrangements organic to their regions, relying principally on their own individual and joint capabilities and prowess.

New security-related arrangements can be based on two existing economic groupings. There is BRIS—Brazil-Russia-India- South Africa, that is, the BRICS states minus China—and then there is the Quadrilateral minus the United States, or modified Quadrilateral or mod-Quad, consisting of India, Japan, Australia and a group of Southeast Asian states, which can collaborate with the US to ring fence and hamstring China without making the American contribution central to the group’s collective security aims and activity.

Greater intra-BRIS and intra mod-Quad parity will mean a higher level of trust, a more equitable style of functioning, and greater policy latitude and freedom of action or strategic autonomy for member states. It will result in better coordinated BRIS and mod-Quad actions with their formidable collective economic, trade and military capabilities restraining China, while making the US redundant. As the country common to both BRIS and mod-Quad, India will be pivotal to the success of both. Indian governments in the 21st century have, however, been timid, eager to reinforce the country’s status as ‘responsible state’ that is rising without disturbing the international order.

For BRIS and mod-Quad, China is a useful adversary, considering that most countries fear it, and almost any move directed at chipping away at Chinese power and advantage, strategically discomfiting it, will bolster their own security. It will require the ‘weaponising’ of these coalitions by making cooperative security as much a shared objective as free trade and economic cooperation. The combined GDP of BRIS in 2017 was $6.6 trillion, about half that of China and a third that of the US. By 2022, the BRIS figure is expected to grow to $8.8 trillion. What BRIS lacks in economic heft relative to China, it can make up by controlling the Asian behemoth’s economic fate. BRIS states control immense resource-rich frontages on three oceans—Atlantic, Arctic and Indian—and on the Eurasian landmass, including Central Asia. This is no mean leverage for BRIS states individually and jointly to wield against China. With only limited openings—and that too contested— on the East Sea and South China Sea, China finds itself in an unhappy position for an exports-dependent nation: its trade traffic has to negotiate adversary-controlled seas. Moreover, US President Donald Trump’s imposition of tariffs on steel imports will victimise India as also Brazil. It has already led Latin American countries to look to Asia for trade partners— an opportunity the Narendra Modi Government cannot afford to pass up to stiffen a trade front to counter Washington’s moves. For this purpose too, the BRIS configuration can come in handy. With BRIS opposed to hegemonism everywhere, it can balance China and the US and become a force for peace and order in the world and a military and economic counterweight to either of them. It will boost the international standing of Brazil, India and South Africa in case of the UN Security Council expansion and/or restructuring.

The mod-Quad of India, Japan, Australia and the Southeast Asian nations, on the other hand, is an obvious geopolitical construct, interweaving the economic and security interests of the littoral and offshore states on the Asian ‘rimland’ first envisaged by the American geostrategist of the mid-20th century Nicholas Spykman as sufficient to contain any heartland power. The mod-Quad is a trillion dollar club with Japan, India, ASEAN and Australia boasting of collective 2017 GDP of $10.8 trillion, each of whom fears China. So what will elicit a positive response to the mod-Quad concept are two things: The ‘over-stretched and under- resourced’ American armed forces, according to US Defense Secretary James Mattis, and evidence of Washington’s reluctance to militarily tangle with China in disputes involving maritime borders in the South China Sea and the Senkaku Islands claimed by Japan. The US withdrawal from the Trans-Pacific Partnership has only confirmed the worst Asian fears about an unreliable America. Geographically more distanced from China, Australia senses greater foreign policy space and latitude for itself, but in its 2017 Foreign Policy White Paper, the country has voiced concern about an ambitious China and the gradual military pullback of the US from the Indo-Pacific region.

China’s military pressure on India, Southeast Asia and Japan is felt on a daily basis and security cooperation is a matter of self-protection. Except, each country has a different payoff matrix with China to contend with. Even so, the shared concern for national security and sovereignty means that the nested military capabilities of the mod-Quad are easier to mesh into an informal collective effort. India, for instance, has ongoing naval cooperation with most of these states and Japan, and can sign agreements on naval and air force basing arrangements with other Southeast Asian states— especially Vietnam, the Philippines and Indonesia— of the kind signed with Singapore to assert the freedom of navigation rights in waters through which pass 80 per cent of China’s oil and 11 per cent of its gas imports from the Gulf. Moreover, the Indian Navy- initiated Indian Ocean Naval Symposium and the annual Milan Exercise for the Bay of Bengal nations are embryonic security cooperation platforms.

In the Sino-Indian context, were it not for the doubts and scepticism about India’s resources and capabilities entertained by those within the Indian Government, India would have long ago embarked on ventures to strategically discomfit China. A mere listing of some options that Delhi has so far foresworn will hint at their potency and potential for bridling China: Transferring Brahmos supersonic cruise missiles and medium (700 km) range Agni-1 ballistic missiles on a priority basis and in bulk to Vietnam, the Philippines and other Southeast nations to neutralise the artificial island bases China has conjured out of coral and cement in the South China Sea, formalising relations with Taiwan, equating Kashmir with Taiwan/Tibet, activating the Tibet and Uyghur-East Turkestan freedom ‘cards’, and cultivating Mongolia as an Indian military outpost. China cannot up the ante as it has already shot its bolt, done its worst, and because there are more states on its periphery fearful of China than there are neighbouring countries that want to stick it to India. Moreover, a poorer India with less to lose can be more risk-acceptant and prosecute more disruptive policies confident that Beijing, with lots more at stake, will not chance escalation.

The fact is China cannot command the sea lines of communications in the East Sea, the Indian Ocean, or the confluence of the Atlantic and Indian Oceans. It cannot control the extended littoral, and cannot risk the situation getting out of hand in the South China Sea. And the wealth-producing Chinese sea-borne trade is at the mercy of potentially adversarial states, which serves as a guarantee of China’s good behaviour. With BRIS shoring up the land and Indian Ocean fronts, China will be rendered manageable for the mod-Quad, making any US role as security provider unnecessary. This will be organic security at its best, with regional states as the main stakeholders.