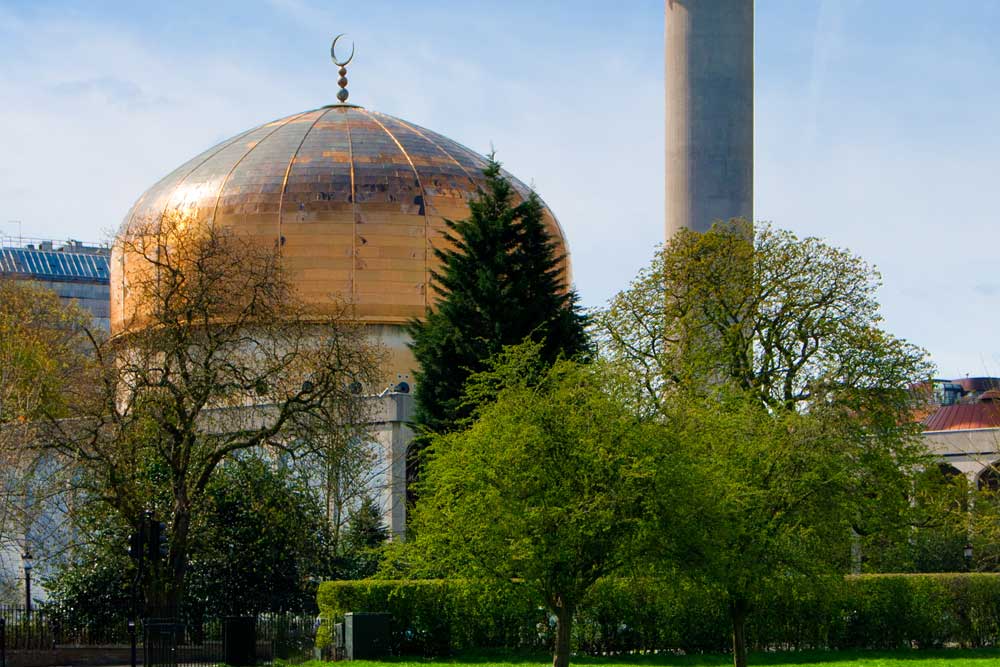 Most visitors to London will be familiar with the Regent’s Park Mosque, the most prominent place of worship for London’s over one million Muslim population, even if they have never been within its premises. The year 1927 saw the completion of the Great Mosque in Paris, but in London, the Regent’s Park Mosque opened 50 years later in 1977. The arguments for the two mosques were the same: Muslims needed a mosque to pray and bury their dead; both French and British Empires ruled over more Muslims than Christians; local Muslims deserved a central mosque because of their loyalty to the mother country during the major wars of the 20th century, and the construction of a significant mosque would bind the Muslims more closely to the Empires’ mother countries. The moving spirits for the proposals in Paris and London made them more or less at the same time, but the London Mosque was opened only 50 years later.

Indian Muslims who visited or resided in London were the first to propose building a central mosque in London. The Aga Khan called a meeting at the Ritz Hotel in 1910 to discuss this, but nothing tangible resulted. The issue became weightier in 1913 when Lord Headley (Baron Allanson-Winn) converted to Islam, and true to a convert’s zeal, Headley gave the Muslims great moral and practical support. In 1916, Headley recommended building a mosque in London to the India Office, and suggested the allocation of £100,000—a very considerable sum at the time—to purchase a site in memory of Muslim soldiers who died fighting for the Empire, stating that Muslims outnumbered every other minority, but had no suitable place of worship. However, the political secretary of the India Office, Sir Arthur Hirtzel, was opposed to such a proposal on the grounds that while it was acceptable to build a mosque in India, even at the risk of upsetting other religions, it was not justified in a Christian country. Headley then approached Austen Chamberlain, secretary of state for India, and pleaded that the mosque would be independent of the then existing Woking Mosque and the Agha Khan’s proposed project in East London. The government endorsed the India Office’s decision and the proposal was shelved.

During winter of 1928, Headley visited India as the guest of the Nizam of Hyderabad. The Nizam, who was a devout person, promised to contribute £60,000 provided the mosque was named the Nizamiah Mosque and be non-sectarian—open for all sectaries of Islam. The Nizamiah Trust then bought a site in West London for £28,000, but the project’s total cost was £170,000 and Headley’s appeal to fellow Muslims to contribute produced little response. The project fell into limbo and Headley died in 1935. George Ambrose (Baron Lloyd), a Christian peer, perhaps because he was anti-Semitic, followed in Headley’s footsteps. In 1939, as president of the British Council, he used Headley’s arguments before the British government in seeking money to purchase a suitable site for the mosque. This initiative also went nowhere, but then World War II changed everything. In 1940, Lloyd was the influential secretary of state for the colonies, and in 1942, the Crown Estate purchased the property of 2.3 acres known as Regent’s Lodge at Hanover Gate on the outer circle of Regent’s Park. The site was transferred to a mosque committee in 1944 which then took over the Nizam of Hyderabad’s Trust.

A further delay was added to the lack of finance. An Egyptian architect’s plans for the mosque and cultural centre were estimated as high as £500,000. The London County Council and the Fine Arts Commission also decided that the proposal would not harmonise with the architecture around Regent’s Park. Then the invasion of Suez in 1956 was another setback to fundraising. From 1944, for about 20 years, the Egyptian government shouldered the responsibility for running a temporary mosque and cultural centre, and appointed the directors and Imams who tended to be Egyptian. The first director was Shaikh Ali Abdul-Qadir who started a reference library and, in 1954, The Islamic Quarterly. This ad hoc use of Regent’s Lodge continued until its demolishment to make way for the new buildings. In 1947, the Charity Commissioners incorporated the London Central Mosque Trust Limited, “to provide a place of worship for the multi-ethic community of Muslims and propagate and expand the teachings and message of Islam.”

By 1968, the Muslim population in Britain had risen to over 600,000. The Imam considered Regent’s Lodge too small to accommodate worshipers, and Saudi Arabia, Pakistan and Kuwait became involved in reviving the building project and were willing to finance it. A committee instituted a design competition, and in 1973, from 17 shortlisted proposals, a panel from the Paris International Institute of Architects, the British Fine Arts Commission and the London Mosque Committee chose the British architect Sir Frederick Gibbard’s plan. The Committee then invited tenders for the construction and the firm John Laing won the contract in 1973 for £3.75 million: a figure that eventually rose to £6 million on project completion in 1977. The largest donation came from Saudi Arabia, but other countries to contribute substantial amounts included the UAE, Kuwait, Iraq, Libya and Qatar. Although Egypt did not contribute a large sum, it continued to appoint the Imam. The committee ignored the Nizam’s wishes that the mosque should be non-sectarian, and called it the Nizamiah Mosque. Six trustees were re-appointed—the Egyptian ambassador, Saudi Arabian and Syrian ministers, Lebanese and Trans-Jordanian chargé d’affaires, and an Iraqi cultural attaché. The Iranian and Afghan ministers and the Indian scholar.Yusuf Ali were dropped. The reasons for their exclusion, or unwillingness to serve, are obscure.

In subsequent years, the main issues faced by the mosque were those of concern to second and third generations of British Muslims. Appointed in 1978 as chief Imam, Zaki Badawi used his status to prescribe an Islam that largely conformed to British values. As a result, young generations brought up in Britain found no conflict between faith and civic identity. That the nearly three million British Muslims today describe themselves as such owes much to Zaki Badawi, who perceived that the many Muslims settled in Britain from various parts of the Islamic world would form a significant strand of British society. At this time when the ruling establishment in India countenances some degree of separation from minorities, Britain still believes in embracing diversity.

However, the Central Mosque has occasionally given space and opportunity to address the congregation to extremists, who consider that Muslim Sharia law sits above local secular laws. Sheikh Anwar Mady, speaking about gay Muslims in Britain, said, “it is against the natural order, the natural pattern of life”, and that such persons either should repress their sexuality or risk persecution. A certain Dr al-Qaradawi endorsed anti-Semitism, wife-beating and the death penalty for homosexuals. That Islamist extremist behaviour in the UK remains a threat to society was evidenced by the recent murder of a serving member of Parliament in October 2021.

In 2016, there were estimated to be about 2,000 mosques and Islamic prayer rooms in the UK, serving 4.1 million Muslims, or 6.3 per cent of the UK population. About 1,500 of these places of worship are located in London and the largest mosque in the country is the Baitul Futuh in Morden, which has a capacity of 13,000. The Regent’s Park Mosque has capacity for 5,400 worshipers, including women. The chairman of the Islamic Centre in London is the ambassador of Kuwait and the deputy chairman from the Embassy of Oman. The important officers are Dr Ahmad Al Dubayan—director-general, and Khalifa Ezzat, head Imam of the mosque and manager of religious affairs at the Cultural Centre. Imam Ezzat was appointed by the Egyptian ministry of endowments. There is a Grand Mufti of Britain, appointed by an independent committee of leading Al-Azhar scholars of which the head Imam of the Regent’s Park Mosque is one.Class and status play a role in the Muslim experience in Britain. Like its Paris counterpart, the Central Mosque in London attracts the elite classes, the non-sectarian middle class, the wealthy and dignitaries, and is considered by many the “official” mosque, while the Muslim working class mainly congregate at the East London Mosque inaugurated in 1941.