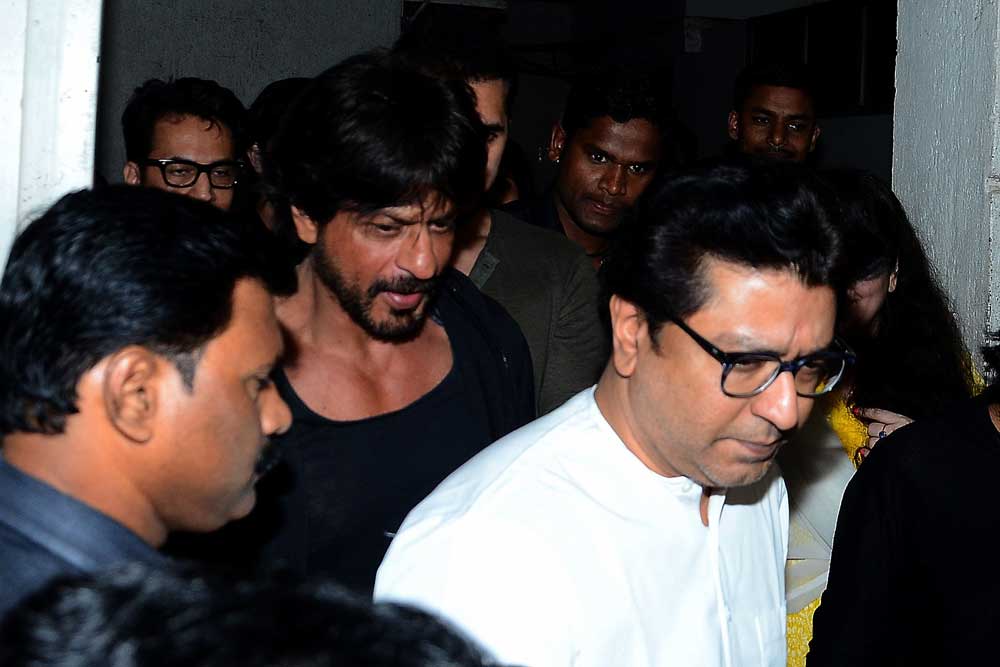 IT WAS AROUND a year ago that Bollywood found itself in the midst of a public debate over whether India had become ‘intolerant’. This was fuelled by an Aamir Khan comment which was later echoed by Shah Rukh Khan. And now the year ends for Bollywood with the image of Shah Rukh meeting Raj Thackeray, an obeisance to a toothless tiger so that the release of his movie Raees in January is not disrupted, leading to the question—how much can a man be party to intolerance against himself?

Six years ago, another movie of his, My Name Is Khan, had been targeted by another Thackeray and that time too the reason the Shiv Sena cited was connected to Pakistan: Shah Rukh speaking for Pakistani cricketers to participate in the Indian Premier League. This time it is his movie having a Pakistani actress in it. His meeting with Raj Thackeray has come in for a some criticism, mostly by courageous soldiers of the liberal army sitting in their armchairs and some in the media who feel betrayed by the submission. But they miss the point. To look cowardly is eminently practical when Rs 100 crore is at stake. None of these liberals turn up to stop the handful of Maharashtra Navnirman Sena workers as they vandalise a theatre. Instead, even if they are there, they move 20 paces away and upload a video with exclamation marks in the caption. Other brave men and women then lead a retweet brigade from their chairs. If they get very upset, they light candles, but not unless there are 25 others with candles around. Which superstar in his right mind would want to go on a collision course with organised violent men for the approbation of such a crowd?

A legitimate criticism could be the pointless over-caution on display. That Raj Thackeray had already extracted his pound of publicity with Karan Johar, and, being both practical and unimaginative, what were the chances of him belling the same cat twice? When he made his threat against Raees, it was clubbed along with Ae Dil Hai Mushkil, and the public sentiment was against Pakistan; now all that people care about are Rs 500 notes. Politicians swing with the seasons and threatening a movie is no longer productive. When that moment returns, all the preemptions of Shah Rukh will not help if Thackeray sees a few extra votes in the next municipality election.

The Economic Times on December 14th had a report on Thackeray, painting him as a Jayalalithaa-esque parody, inaccessible to his own party members who wait outside his door for an audience. Except that he is no chief minister with spoils to dole out and so they are now slinking away to other parties like the Shiv Sena. It is hard work to be a Jayalalithaa, and the Thackeray name and diction do not make up for that. Between Karan Johar, Devendra Fadnavis and Shah Rukh, they’ve given another insignificant breath to a fading enterprise, but what does it matter.