The real test for demonetisation’s popularity will be in December, when it’s time for salaries 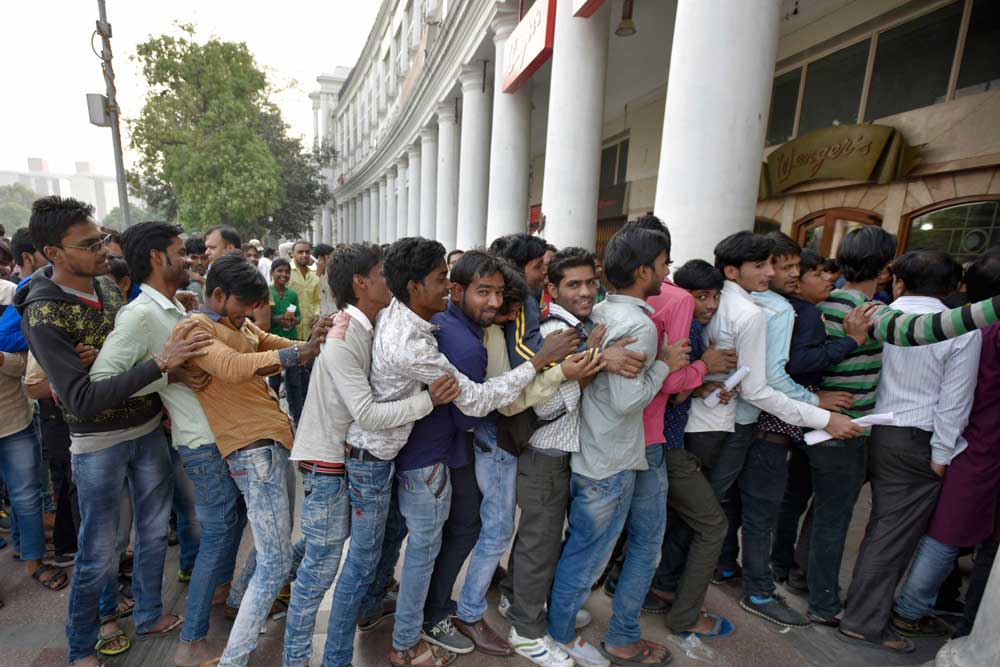 A POLL BY C-Voter for Huffington Post and Businessworld shows demonetisation having overwhelming support—93 percent thought it a good step and 66 percent even found it well implemented—in both rural and urban areas. Polls are tricky as we know after the American elections. But asking a thousand people selected through statistically objective criteria is still better that swinging whichever way our bias takes us, whether pro- or anti- Government. There is clear agony from demonetisation, evident from relentless queues outside banks even now, but to consider this apocalyptic is an optical illusion. The queues are not made up of the same people every day. The suffering lasts the hours they stand and ends with the withdrawn cash, not to return for many days.

It is thus in keeping with the perception of demonetisation as a moral project that people accept or, at least, tolerate it. That might change soon. When Narendra Modi made his first public speech post-demonetisation, he asked for Indians to give him 50 days. He will probably only get 30. From December onwards, salaries need to be paid in cash by millions of small and medium businesses. Should that be delayed, and it looks like a strong probability, because of currency shortage, what is an inconvenience becomes a real crisis. Small businesses that have cash stashed away have already forced old currency on employees. Without new cash from either clients or banks, how can they pay?

The salary rush is something the Government probably has factored in. But it’s increasingly clear that there is just no way to plan precisely for such an unprecedented overarching transformation in this unorganised disorder that is India.

The poor, who are all voters, like it when black money hoarders suffer or when they see the rich stand beside them in queues. That pleasure, however, isn’t enough to make up for a hit on their living. A few months down the line there could be loan waivers and other sops that the Government hopes the cash infusion will allow, but by then the narrative is already lost.

In hindsight, the Rs 2000 note that emanated from the administrative convenience of printing one instead of four 500 rupee notes to replace sooner the demonetised cash might be the single biggest thing to test Modi’s legacy. The only thing you can depend on from this chaos is that he cannot afford to lose. He is also entrapped in the moral project that he kicked off. The Indian Express has reported that two months ago, the Law Ministry rejected an Election Commission request asking for elections to be declared void if there was evidence of voters being bribed. That was politics in the pre-demonetisation world. The future, with all the forces now unleashed, will have to be less cavalier. The results of subsequent polls will be very different otherwise.