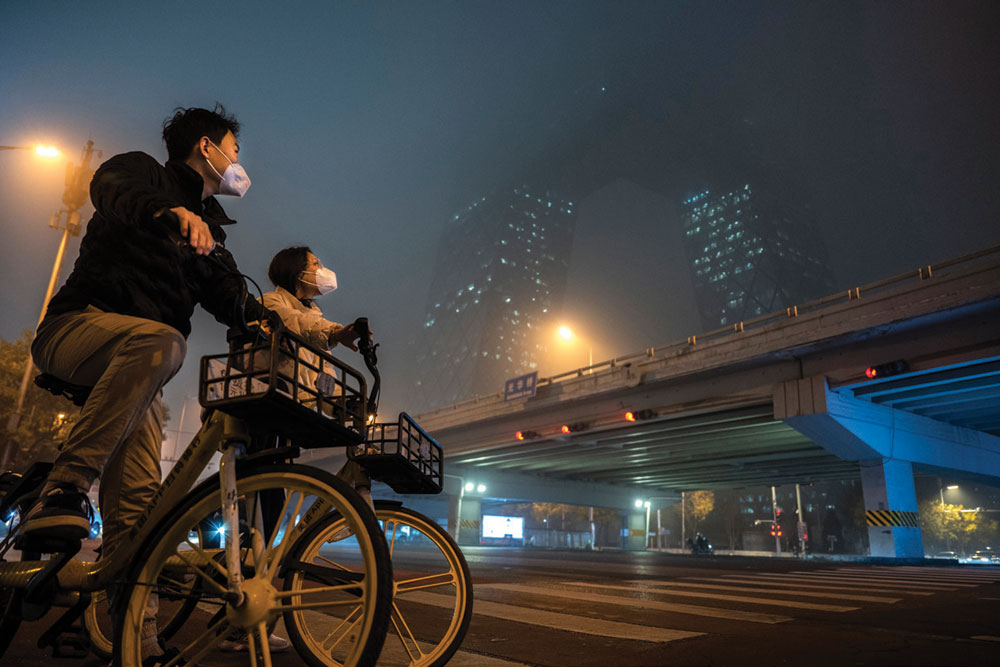 The CCTV building behind the smog in Beijing, November 20, 2022 (Photo: Getty Images)


I LIVED IN BEIJING between 2002 and 2009, a period of time when the city was the global poster boy for air pollution. Even aunties in Delhi would solicitously query me about the terrible air in China, with barely concealed schadenfreude—or “airenfreude”!—seemingly oblivious of the poison outside their own windows.

Having grown up in perennially polluted Delhi, smoggy skies were so unremarkable to me that I didn’t even notice anything was awry in Beijing for years after moving there. Then, one spring morning in 2006, I looked outside of my central Beijing apartment at an apparition: a blue sky, punctuated by the sweep of rolling hills. For the year that I had lived in this apartment, the view from my study had only revealed the low rooftops of the courtyard homes that clustered around our complex. The appearance of the hills felt magical, except it was not magic, merely the absence of air pollution.

Before that moment, I don’t think I had really “seen” the dirty air in China, unlike rich-country expats who had certainly muttered aplenty about the toxic air. But my reaction to these grumbles was initially akin to that of most Chinese themselves: dismissal as overblown first-world concerns. In China, as in India, the general attitude was to associate the grimy air with weather phenomena like fog and sandstorms, rather than pollution.

In Beijing, the tipping point that shifted the awareness of and attitude to air pollution was the 2008 Olympic Games hosted by the city. In the run-up, Beijing went into a construction overdrive to retool its infrastructure, plunging the capital into a years-long haze of construction dust. The Games also provided the perfect opportunity for foreign journalists to hold the Chinese authorities to account for their numerous failings, from media censorship to corruption. But pollution bestrode coverage of the event, dwarfing other matters. Beijing’s air quality became the litmus test for the Communist Party’s willingness to modify its policy of sacrificing all at the altar of economic growth.

BEIJING’S POOR AIR, like Delhi’s, resulted from a compound of factors, ranging from vehicular to industrial sources. And again, like Delhi, it was exacerbated by unhelpful geography. The Chinese capital has mountain ranges to its north and west, which prevent the pollution drawn in from the industrial townships to its east and south from escaping. Also, low temperatures in the winter create an inversion layer, a phenomenon mirrored in Delhi, so that cold air bands get pressed under a warmer air mass, trapping pollutants close to the ground.

As I began to report on China’s degraded environment, the parallel fact of Delhi’s smoggy skies become harder for me to ignore. Every Christmas holiday, I’d returned home to putrid air that left my eyes smarting. Yet, if I raised the issue with friends, I was met with eye-rolling intended to indicate how much of a “foreigner” I had become. In fact, according to NASA satellite data, the levels of fine particulate matter had got worse across India by 13 per cent between 2010 and 2015, while China’s fell by 17 per cent.

Channeling one’s inner ostrich when it comes to air pollution is a universal affliction suffered by citizens of developing countries. To understand what from a rich country’s perspective is our peculiar obduracy in reacting to air pollution, one must realise that many of us will die prematurely and/or suffer long years of bad health regardless of air pollution. We grapple with a long list of possible ills, including typhoid, dengue fever, and malnutrition, before becoming overly concerned with the cardiovascular implications of exposure to dirty air.

Yet, greater awareness can, when the information is dire enough, eventually lead to change: a process that by the time of the Olympics had clearly begun in China. The media attention garnered by air pollution made the dirty air visible to residents in a way that years of actually living with the heavy particulate matter had not.


Despite being the mainstay of China’s energy mix, coal-fired power plants came under the hammer. In March 2017, the national government announced the closure, or cancellation, of 103 of these plants, which would have been capable of generating more than 50 gigawatts of power in total

Over the last decade, China has unexpectedly emerged as the global frontrunner in tackling dirty air. A report by the University of Chicago’s Energy Policy Institute has shown that China reduced air pollution nearly as much in seven years—between 2013 and 2020—as the US did in three decades. The reduction in harmful particulates in the air during this time was 40 per cent.

Beijing achieved this by instituting a broad, “regionally coordinated” system of air pollution monitoring, installing high-tech pollution abatement equipment on a majority of its power plants, as well as devising means to restrict car ownership in major cities.

It’s important to note that despite the widespread belief in India that the Chinese government has carte blanche to push through any reforms it likes, in fact, the ruling party is not a monolith. Making environmental protection a priority is an ongoing and conflicting process. Over the years, it met with considerable pushback from vested interests both within and outside the ruling party. And yet, Beijing persisted, partly as a response to civil society pressure from below and partly from an elite-driven realisation of the economic consequences of unchecked environmental damage.

Between 2012 and 2014, China installed some 1,400 pollution monitoring stations across 337 cities, covering roughly 98 per cent of the population. By 2017, 900 cities were covered. In 2014, China updated its environmental protection law to give local authorities the power to detain company bosses who didn’t complete environmental impact assessments. The law also removed limits on the fines that firms could be subjected to for breaching pollution quotas.

China’s pollution-fighting attempts were multi-pronged, but with a focus on heavy industry. Despite being the mainstay of China’s energy mix, coal-fired power plants came under the hammer. In March 2017, the national government announced the closure, or cancellation, of 103 of these plants, which would have been capable of generating more than 50 gigawatts of power in total. Further, all new coal-fired power plants were mandated to be “ultra-low emissions”, or about as clean as natural gas plants. To replace coal, China has been rolling out the world’s biggest investment in wind and solar power.

Vehicular pollution was not ignored. Measures to restrict car ownership were put in place in many cities. Beijingers, for example, can only buy a new car if they do not already have a vehicle registered under their name. They are then eligible to enter a monthly lottery for licence plates.

Finally, China learnt that for anti-pollution measures to be successful, they had to consider entire air sheds or zones within which air circulates. Although a few Indian cities (notably Delhi) have taken some anti-pollution actions, these are not coordinated at the regional level. But Beijing’s experience with polluted neighbouring areas like Tianjin and Hebei has proved that unless the north Indian states of Haryana, Punjab, Uttar Pradesh and Rajasthan work in tandem with Delhi, even Herculean efforts by the capital city on its own will not prevent it from choking.

When I wrote my 2016 book Choked! , comparing air pollution in India-China, there seemed some hope that India was having its own “airwakening”, with Chief Minister Arvind Kejriwal at the helm, who suffered from respiratory disorders himself. But seven years on, despite rising awareness and a number of policy measures to tackle the problem, Delhi’s air remains toxic. The average Air Quality Index (AQI) of October 2022 was 209 vs 173 in 2021, multiple times greater than Beijing’s.

For India, China should remain the model to learn from when it comes to air. Beijing’s experience shows that blue skies entail a tough, long slog that requires, among other elements, political will, civil society activism, commercial compliance, and bureaucratic incentives. There are no silver bullets. But air pollution is a man-made problem, with man-made solutions. It’s tough to fix, but far from impossible.