A Pandemic Treaty for a Borderless World 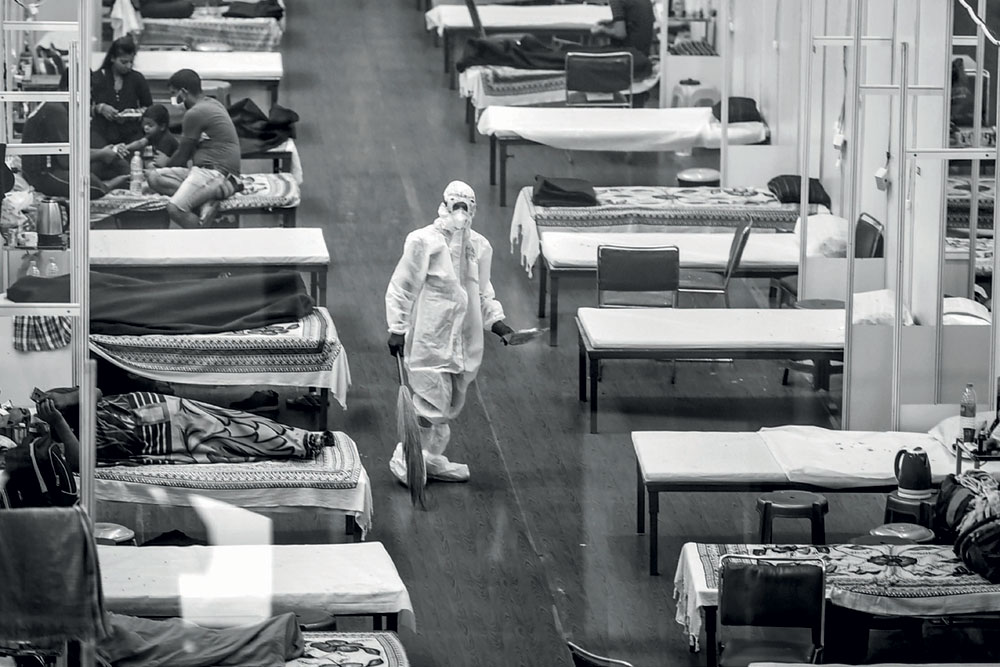 In an ideal world, the UN Security Council should have met as soon as Covid-19 was declared a pandemic, treat it as the greatest threat to international peace and security and adopt a resolution to create a structure for urgent international cooperation under Chapter VII of the UN Charter, giving it the responsibility to coordinate relief by way of supplies, regulate the use of available resources and to develop vaccines and medicines, which did not exist. With the traditional proviso for consent of the parties concerned to operate in their own territories, a voluntary “Health Keeping Force” wearing red berets in place of the blue berets of the Peace Keeping Force should have been formed to reach assistance, gathering data and educating the population. The entire machinery of the United Nations, including the specialised agencies, should have sprung into action. But the Security Council was paralysed because of China, which carried the burden of the responsibility for creating the virus, or at least not alerting the world to the lethality of the pandemic they had experienced.

The inaction of the Security Council was particularly deplorable because at the time of epidemics like HIV/AIDS, Ebola and SARS, the entire UN machinery was deployed effectively and the situation was brought under control. This demonstrated the fundamental flaw of the UN, which is that the power of the veto gives the permanent members of the Security Council absolute power even in dire circumstances. This is the first time that the veto prevented the UN from saving the world from an apocalyptic pandemic.

Now, after deaths of millions in every part of the world, suffering and loss of livelihoods and causing irreparable damage to the global economy, the World Health Assembly of the World Health Organization (WHO) has adopted a decision on May 31st, 2021 to discuss a new international treaty on pandemics at a special session to be held in November 2021. Such a treaty would support international efforts to reinforce global health security, in particular, on preparedness and response to health emergencies, in light of lessons learnt from the pandemic. It has been argued that the Covid-19 pandemic is a global challenge and no single government or institution can address the threat of future pandemics alone. A legally binding instrument under international law would enable countries around the globe to strengthen national, regional and global capacities and resilience to future pandemics.

To reinforce the decision taken by 194 nations, 25 enthusiastic heads of state and international agencies have come up with a statement to support the initiative, sensing perhaps that the negotiations will drag on for a long time because of the hesitations of several countries to rush with a treaty. The international community should work together “towards a new international treaty for pandemic preparedness and response” to build a more robust global health architecture that will protect future generations, some world leaders said. “There will be other pandemics and other major health emergencies. No single government or multilateral agency can address this threat alone,” the leaders said in their statement. “The question is not if, but when. Together, we must be better prepared to predict, prevent, detect, assess and effectively respond to pandemics in a highly coordinated fashion. Among the signatories were the heads of government of the UK, Germany, president of the European Council, Spain, Norway and Dr Tedros Adhanom Ghebreyesus, director-general of the WHO. The Europeans were the main proponents and the others went along with the idea of the treaty without committing themselves to any specific timeframe. The US, China, Russia and India are not signatories to the statement.

What the WHO is proposing is nothing but a standard practice of multilateral institutions to create a multitude of institutions and a bureaucracy, which will consume available resources on their own upkeep. The treaty would set out the objectives and fundamental principles in order to structure the necessary collective action to fight pandemics. The expectation is that such a treaty can enhance international cooperation in a number of priority areas, such as surveillance, alerts and response, but also in general trust in the international health system. A globally coordinated approach to discovering, developing and delivering effective and safe medical solutions, such as vaccines, medicines, diagnostics and protective equipment would benefit collective health security.

The objectives of the proposed treaty are clear enough. But it was not because of absence of regulations that the international community failed to respond to the pandemic effectively. The International Health Regulations (IHR) of the WHO were supposed to create a high-performing system for surveillance of outbreaks of new pathogens that could protect the public health and economic interests of the Global North from the diseases presumed to rage uncontrolled in the Global South. Such a skewed approach has been proved wrong during the current pandemic. It was the north that was devastated by Covid-19 before it moved to the south. Even a new pandemic treaty is not likely to commit all nations to rise above their national interests to meet a grave emergency. All theories of sovereignty and paramount interests of the countries will be bandied about and the treaty will incorporate the lowest common denominators on the issues discussed. This may elaborate on the existing regulations, but may not make them more effective.

The Security Council has failed humanity many times because of the use of the veto of the permanent members to protect their own interests. Many important issues relating to peace and security are relegated to the General Assembly, whose decisions are not mandatory. In the process, the new treaty will have nothing to compel the member states to ensure international cooperation. There have been calls for a new pandemic treaty that would address gaps in the global governance of threats to global health security. The emerging debate has quickly turned to focus on questions of structure and forms—a UN treaty or a framework convention under the auspices of the WHO.

We have learnt over the years that Conventions and Treaties negotiated in the General Assembly wither away over a period of time. The Framework Convention on Climate Change, for instance, raised high hopes with a bang in 1992, but ended in a whimper, when principle after principle was lost in the subsequent discussions on related protocols and new regulations. A Comprehensive Convention Against Terrorism, which received wide acceptance in the aftermath of 9/11, fell by the wayside because of major differences on definition of terrorism itself.

The new pandemic treaty should focus on security of people rather than national borders and highlight the international peace and security dimension of pandemics and require the Security Council to act, when faced with such existential threat to humanity. Provision should be made for the UN to take multilateral action across borders, treating health security as part of human security as “nobody is safe until everyone is safe.” In 2005, the then Senator Barack Obama wrote: “In an age when you can board planes in Bangkok or Hong Kong and arrive in Chicago, Indianapolis or New York in hours, we must face the reality that these exotic killer diseases are not isolated health problems half a world away, but direct and immediate threats to security and prosperity here at home.” The Covid-19 has made this assertion prophetic and a new pandemic treaty will be purposeful only if it can meet the challenge of this reality.