Have You Burnt Your Mouth?

The triumphs and tragedy of Dalit food 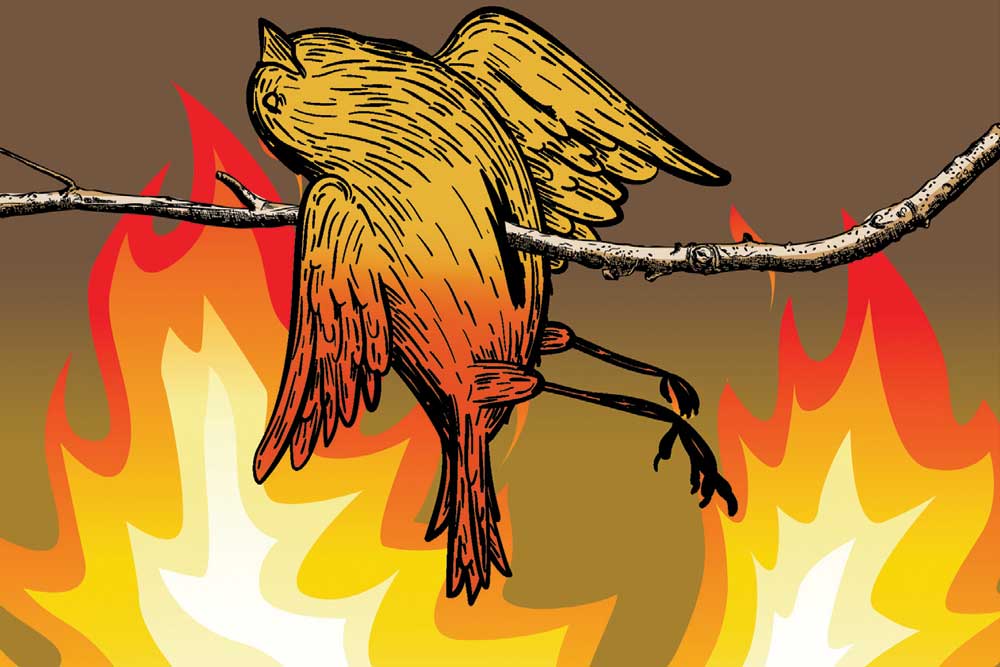 WHAT IS DALIT food, I asked Chandra Bhan Prasad, who has started Dalitfoods.in. Have you eaten bread made of dry peas, he asked. I shook my head. In summer, peas are dried and crushed into flour and then thick rotis are made. Every Dalit household ate this in Azamgarh in eastern Uttar Pradesh when Chandra Bhan was growing up in the 1960s, 70s and 80s. At that time, peas featured in every meal. Lunch and dinner consisted of dried pea rotis and a chutney of red chilli, salt and water or a flax seed chutney or one made of the leaves of the green garlic plant, or a dal of dry peas. If the family was slightly better off, they would add onion to the dish. In the evening, women would soak the dried peas in water, and the next day, their breakfast was soaked peas with salt and chilli. Those who couldn’t afford chillis would break the roti and soak it in water and salt and eat that as a meal. No tomatoes, no onions, no rice, no wheat, no oil, no sugar, no eggs, no lentils. Their diet was mainly barnyard millet. Turns out, millet grows very quickly (within 40 days) and is used by upper-caste landlords to feed cattle and pay Dalit families for labouring in the fields.

Given the current fashion of eating ‘superfoods’ that are primarily ancient grains, including millets, I looked into whether this was a nutritional diet. Millets are nutritionally superior to rice and wheat as they contain a high amount of proteins, dietary fibres, iron, zinc, calcium, phosphorus, potassium, vitamin B, and essential amino acids, but the presence of anti-nutrients like phytates, polyphenols and tannins reduces the mineral bioavailability, say food scientists. The grains release sugar slowly into the blood stream and thus are considered ‘gluten-free’, but the downside is that millet grains contain goitrogens. These are substances that suppress thyroid activity and can lead to goitre. Cooking actually increases their goitrogenic effect.

No meat at all? I enquired. They ate pork on special occasions or when they could afford to buy it. Some families who could afford it would promise two or three piglets to the village deity if their wishes were fulfilled. Pork skin is the most delicious part of pork, and is given to children after the pork is roasted to burn off the hair. It is also offered to the village deities Sheetla Mai and Deeh Baba.

“This is not pork,” he said, after taking a bite of the imported barbecued pork he had ordered at Gymkhana club. It was chewy and sweet, smothered as it was with barbecue sauce. “We cook pork using only salt, nothing else. The meat is very fatty and very delicious. The sauce is made with the blood and seasoned with red chilli and salt.”

In winter, a pickle of pork skin is made: ‘[B]oil the skin for an hour, and this will enable the fat to separate from the skin, which shrinks.’ It is stored in jars, and whenever the occasion arises, the pickle is heated to melt the fat, and served.

The description of how the pork was cooked and pickled reminded me of a show I had just seen, Chef’s Table, where the focus was on Faviken, a restaurant situated in the wilds of Sweden and one that has won rave reviews, including being named among the 50 best restaurants in the world. Its chef- owner Magnus Nilsson, just 32, has compiled Nordic Cookbook, a record of several hundred years of Nordic home cooking with about 730 recipes. One of his signature dishes is a single scallop poached in its own juice that arrives in its shell, nestled on a bed of moss and burning juniper branches. In the interview, Nilsson said that his eureka moment came when he realised that a dairy cow tasted rich and vibrant compared to the meat from one bred for slaughter. His method of preparing the meat was simple—age it for twenty or so months, and then cook it in butter and salt, that’s it. One can experience the pure umami taste of meat.

Or how about Hazelhen with fresh lingonberries? Nilsson describes it thus:

‘The little birds are cooked whole [directly over a wood fire] and at the end, while someone else is carving them, I simply cook the hearts and livers, the lingonberries and a few of their leaves, letting everything fry for a few seconds before finishing it with some good butter and then transferring it directly from the pan to the plate.’

Those of us who’ve been lucky enough not to have experienced a dire paucity of food cannot comprehend what it is to have never tasted a lemon or tea or lentils cooked with turmeric. The only way out of a minimalist existence for a Dalit was to escape to urban areas

Why cook a bird whole over direct heat? Why not just cut the legs off the body and leave the meat on the breast bone, brown them both and then cook them for different time periods in a low-temperature oven or maybe even a water bath, and then reheat to order? The answer is simple, writes Nilsson in Faviken, his cookbook-memoir. ‘[B]ecause it will never be as scandalously delicious as when roasted for hours over direct heat… and the smoke from the fire giving the skin just a hint of burning wood.’

Just like the Dalit household’s technique of roasting a piglet, cooked in its own fat, with salt. A Dalit family’s most coveted meat was pork, and the most coveted vegetarian food was Haldiya dal—lentils cooked with turmeric. When marriage brokers proposed a groom, the bride’s family would ask if they used turmeric the whole year as a way to gauge the economic status of the family. The groom, on the other hand, would enquire about the bride’s height and complexion, and these days, also whether she is literate, but not about her cooking skills— not surprising when even the availability of food is in question.

The Faviken example highlights the move in the food world to work with local produce, while simultaneously tackling the hardship created by an emphasis on seasonality in landscapes that are under ice for half the year. While Nilsson stores tomatoes and potatoes and other vegetables grown in summer in a cellar, and creates a menu of choices for autumn and winter, which would not have been possible had he relied solely on seasonality, Dalit women pluck pea and mustard leaves— about 5-7 kg every day—in winter, boil them in salt and water and store them. This saag is served with a bit of roti during the subsequent months. Their winter diet was sugarcane juice— about 6-8 litres of it was given in a saika (a bowl-shaped jug) in lieu of a daily wage to a Dalit labourer who preferred this since the whole family could consume it.

The Dalit experience with non-dietary fibres, and the unaffordability of oil, turmeric, onion, tomato, wheat and rice (the dietary staples of higher castes) highlights the absence of choice too, but this absence is determined not just by seasons (as in the Scandinavian case), but also by the caste and class hierarchy in villages. A Dalit family was given the rejects—the kernel of a mango (which they cracked and used the paste inside to make roti), the husk of wheat, millets, and, if they were lucky, rice too, but the most degraded version. Therein lies the tragedy. Foraging has become a fashionable choice in the food world of the West (the chef owner of Noma, the world’s best restaurant, is a die-hard forager), whereas a Dalit in eastern UP had no choice—he or she had to fight with birds for the fruits of banyan and pipal trees, and for mahua flowers (Bassia latifolia or the butter tree) which they crushed and prepared as rotis. In summer, they bludgeoned field rats. You roast it whole with salt. Rat, it seems, tastes like chicken.

Those of us who have been lucky enough not to have experienced a dire paucity of food cannot comprehend what it is to have never tasted a lemon or tea or lentils cooked with turmeric. The only way out of such a minimalist and choiceless existence for a Dalit was to escape to urban areas, which many of them have done since 1991.

Chandra Bhan participated in a survey conducted by scholars at the Centre for Policy Research and the University of Pennsylvania, which assessed the present-day lifestyles of 19,087 Dalit households in Bilariaganj block of Azamgarh (east UP) and in Khurja block, Buland Shahar (west UP). In both blocks, over 99 per cent of Dalit families had stopped eating millets. To the question, ‘Have you burnt your mouth?’, a Dalit youth today in Chandra Bhan’s village would shake his head. But his father would nod. When? The first time he had tea, he had drunk it quickly like the sugarcane juice he was accustomed to having. And he had burnt his tongue.