A Mask for God 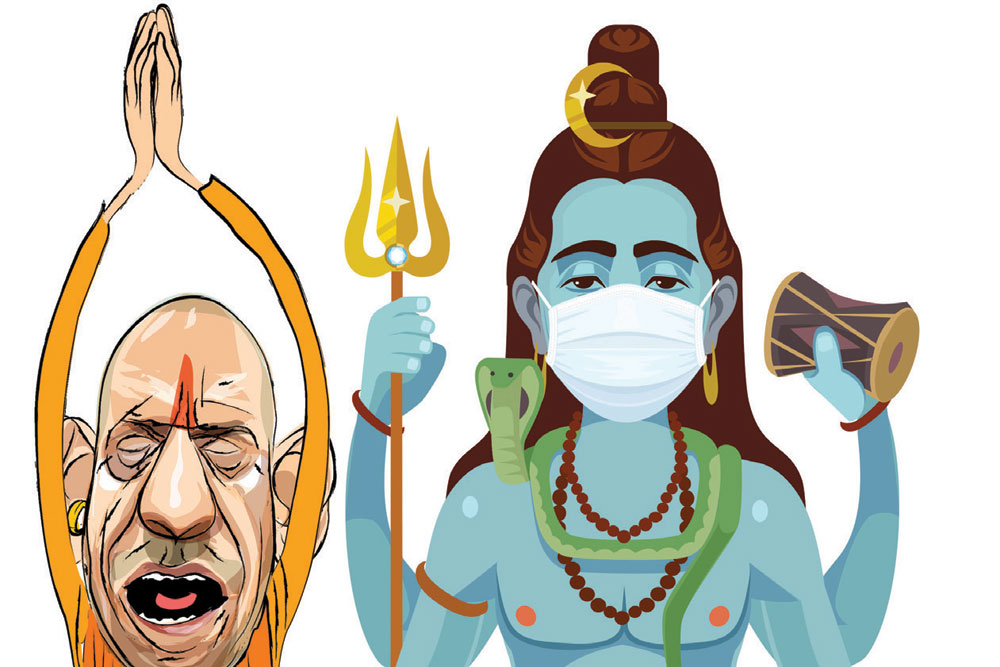 
Uttar Pradesh Chief Minister Yogi Adityanath got into an unexpected controversy when he went to a temple to pray and offered a new mask to the deity there. As a sanyasi who usually gives flowers and fruits in temples, the opposition asked why he was giving a mask. They said he was ridiculing god. Adityanath’s reply was that, in Hinduism, god is like a family member who eats as everyone eats, and in winter, even woollen shawls are draped over him. A BJP leader defended Adityanath by arguing that he was, in fact, seeking blessings and protection from god against Covid-19.

Home Minister Amit Shah and West Bengal Chief Minister Mamata Banerjee had an interesting language conundrum. Shah first sent a letter to Banerjee in Hindi, which she can read but not write in. Her advisors suggested sending a Hindi translation instead. Banerjee said it won’t sound natural. Some asked her to reply in Bengali as tit-for-tat. She said that even though Bengali is her mother tongue, she was not anti-Hindi. She thinks in south India they are sensitive about the Hindi issue but it wasn’t something that she felt upset about. So she is replying in English, which seems a fair middle ground.

Because of the lockdown, the Central Bureau of Investigation and the Enforcement Directorate (ED) had been inactive. They were not able to operate or go to different metropolitan cities and states. But now they are back on the job and sending fresh summons and showcause letters for interrogations. The ED again sent a notice to senior Congress leader Ahmed Patel over the AgustaWestland case. The Congress thinks this is being done because the Bihar elections are coming. The BJP and the Centre say that it is because of instructions from the court.

After the controversy over news agency PTI’s coverage of China, the Prime Minister is not happy with media management. Modi thinks there is a small group trying to play a negative role. Even during a warlike situation, they are friendlier to inputs from the Chinese media, suggesting possible Chinese inroads in the Indian media. The Government has formed a small group of ministers, including Prakash Javadekar, Kiren Rijiju, Mukhtar Abbas Naqvi, et al, to take feedback from different sections of
the media and intellectuals on how to address this issue.

Former Prime Minister PV Narasimha Rao’s centenary was marked recently but the Congress, which he led once, organised no event. The ostensible reason was the lockdown, but the fact is the Congress has always ignored Rao after the Gandhi family retook control of the party. But Prime Minister Narendra Modi tweeted on the day and praised Rao. Former Prime Minister Manmohan Singh’s media advisor Sanjaya Baru tweeted that Singh should have given Rao the Bharat Ratna and that it remained a black mark against his tenure. Rahul Gandhi also put up a tribute on Facebook for Rao.

Assam Deputy Chief Minister Himanta Biswa Sarma is close to Home Minister Amit Shah. When he left the Congress and joined the BJP, his expectation was to be made Chief Minister, but the BJP gave the post to Sarbananda Sonowal. Assam elections are due next year and Sarma has proven to be a great asset for Shah, even in the recent operation in Manipur to retain their government. But the BJP can’t change the Chief Minister either. One proposal is to make Sarma a Central minister. He could then be used in managing different states for the party. Indira Gandhi often used this formula. Will Modi be ready to do that?

Pakistan Prime Minister Imran Khan bowled a political out-swinger recently when he announced that the Pakistan government will give Rs 10 crore to build a Krishna temple. It had been a demand of Pakistan’s minority Hindus for a long time. No government had agreed but Khan has now done it. The temple will be constructed in Islamabad. Another demand was for a cremation ghat for Hindus and Imran is doing that too, just behind the temple.

Parliament’s Monsoon Session is due but it doesn’t seem likely to be held given the lockdown. Rajya Sabha Chairman and Speaker M Venkaiah Naidu was considering holding standing committee and consultative committee meetings but a majority of the MPs were not enthusiastic. But there is a constitutional issue. After the conclusion of one session, within six months, another must be held. Now September 23rd is the deadline for it, since March 23rd was the last date of the previous session. The buzz is the Government could suggest holding the session just for a week to pass some important bills.

A movie on Samajwadi Party patriarch Mulayam Singh Yadav is shot and ready for release in August but his son, party chief Akhilesh, is not very happy. Apparently, Mulayam told him he does not know anything about the movie and is not associated with it.