A Civilisational History of Motifs 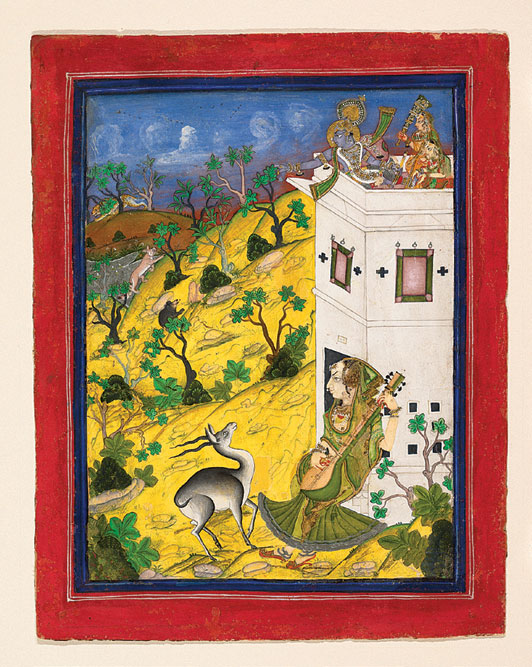 A female musician charms an antelope, circa 1825


ON JANUARY 10TH, 1645, William Laud, who had earlier served as the Dean of Chapel Royal, member of the Privy Council, Bishop of London, Chancellor of Oxford and, finally, as the Archbishop of Canterbury, was beheaded after being condemned by the House of Lords. For generations, Laud was often described as an overzealous, mealy-mouthed, ecclesiastical bungler. Thomas Macaulay, ever ready with strident opinions, summed up the extant view of Laud: ‘a ridiculous old bigot… superstitious old driveller.’ Laud may have been many things, but he certainly wasn’t a bigot in the simple-minded way Macaulay sought to portray him. Laud had increased funding for the University Chair in Hebrew, set up a new Chair for a Professor of Arabic and had demonstrated a ‘life-long interest in Oriental culture’. In 1640, before his execution, Laud donated 1,300 manuscripts from his collection to the Bodleian Library. It is in this donation that we come across the first surviving collection of the Ragamala paintings that had travelled outside India.

Nearly four centuries later, cohorts of the Ragamala paintings continue to travel the world. Often loaned from museum to museum, curators try to impress upon audiences their importance. Their knock-offs often adorn Indian restaurants in Toronto and New York, while scanned images pop up on Twitter solemnly awaiting their retweets. More secretively, there is also a traffic of preparatory materials of these Ragamala paintings, including original sketches that change hands privately. Where they come from, what price were they bought for, who were the original owners—none of this is known to the wider public. The irony, of course, is that for both collectors and museums the Ragamala paintings are often merely yet another object of antiquarian interest. The complex histories these paintings embody, the intellectual puzzles they throw up and the strangeness of their original conceits are often of secondary, even tertiary, interest. Yet, irrespective of this subterranean commerce and the private vanities of collectors, to come face-to-face with the Ragamala paintings is to recognise there once thrived in India a different set of aesthetic values that may look familiar but is progressively stranger the more one thinks about them. As if they were the remains of a permanently lost world.

The word ‘ragamala’—a garland of ragas—is often used to describe a group of paintings that visually represent the ragas. It is not entirely clear when this name stuck to them; but the conceit of evoking the musical moods through painting has at least a millennia-long history. Predictably, over time, there have been various sets of Ragamala paintings, drawn across centuries and cultural centres across India. The result is a great diversity in the motifs deployed. Thus the Shri raga could be painted in one Ragamala set in 15th century Rajasthan in one way and in 18th century Bengal in another. The oldest known proto-Ragamala paintings were found among Jains in Gujarat. Kalpasutra, a concatenation of biographies of Tirthankaras (omniscient Jain seers), is leavened with ‘representations of ragas’. It is not known how these paintings were understood or ‘consumed’, but the fact that many other versions were repeatedly created thereafter shows these paintings did find a niche within the corpus of Indian art, particularly as a mnemogenic—to use a Nabokovian term—a visual aid to arouse emotional responses to musicality. Thus these paintings stand in contrast to the notation schema used in the West or the geometries of Arabic music as described in the 13th century Kitaab al-adwaar by Safi al-Din al-Urmawi, which are typically proxies for memorisation. Klaus Ebeling, a scholar of these paintings, writes: ‘These garlands of ragas were devices of memorization and classification for the musician who associated the individual [musical] modes with deities to whom the Ragas were dedicated.’

Most Ragamala paintings are usually drawn in a horizontal layout, which allows the artist space above and below the scene to add Sanskrit verses (dhyana) that often evoke the deity who is considered to govern that raga. Many who see these Ragamala paintings however fall into the trap of thinking, or implicitly assuming, that a raga name mentioned in a 16th century painting (say, the Bhairav raga) is precisely the same as the Bhairav raga performed today at the Sawai Gandharva festival. Implicit in this misunderstanding is the notion that ragas are immutable—in theory and in practice. The historical reality is less assured. Ragas, like living beings, undergo evolution, change names, take on new notes, drop some, assume new embellishments, fade away and re-emerge in new forms with old names. For their part, many Indians and Indian music aficionados are often reluctant to see their musical and artistic traditions as subject to historical forces and as byproducts of human contingency. This reluctance to believe that a raga’s musical interiority and its anatomic structure are subject to change is understandable. The tyranny of presentism, like elsewhere in our lives, is hard to overcome.

To make matters more complex, there is also the question of nomenclature. That the term ‘raga’ has meant different things over time and geographies of India is to be expected—but more subtly, at any given time, what distinguishes a raga from a simple scale or melody depends on how one seeks to define a class called raga. Before long, one dives headlong into the rabbit hole of musical minutiae where the Red Queen of raga as a historical concept awaits any and all interlopers. Should one escape that labyrinthine musical puzzle, the principal challenge for a viewer of a Ragamala painting is to recognise that its meaningfulness is born not from the object itself—unlike say a late-Renaissance era painting in a desacralised Western museum—but from the correlations among music, art and the presence of traditional archetypes within. In this sense, the Ragamala painting is closer to modern performance art where any meaning is born often outside that which is immediately visible.

Perhaps, the greatest difficulty for us, including the collectors who squirrel away these possessions, is to comprehend the philosophic vision that informed the aesthetic theories out of which the Ragamala paintings were born. In the 2nd century encyclopaedic compilation Vishnudharmottara that dealt with subjects as diverse as cosmology, painting and cuisine, there is a story of King Vajra who goes to meet Sage Markandeya. A quasi-Socratic dialogue between the two follows. Vajra asks Markandeya to teach him the art of making images or icons. In order to make icons, Markandeya says one must learn the art of painting. But a good painter, Markandeya continues, must also know the art of dancing—for both arts involve the knowledge of ‘three worlds’ (in modern translations, ‘three dimensions’). Yet again, before Vajra gets his hopes too high, Markandeya instructs him that to be a good dancer, one must have a sense of music. And slowly, it dawns on Vajra that to master one art form is to cultivate awareness regarding another art form, in turn leading to mastering yet another and so on. At its limit, says Markandeya, to master painting is in effect indistinguishable from cultivating aptitude and talent for ‘sculpture, dance, instrumental and vocal music, song composition, prose, poetry, literature, language, grammar, logic, aesthetics, theatrical arts and even theatre-architecture’.

This conversation, now largely forgotten, speaks of an attitude towards aesthetics that was less interested in heading in search of the essence of art and instead sought to burnish the interconnectedness of creative expressions. Any work of art, from this perspective, then contains not just itself, but also subsumes, hides and reveals—in its final form—the expressive possibilities contained in other artistic expressions. It is this idea of interconnectedness that informs the Ragamala paintings. Painting then can be understood to contain musicality, music can reflect the preciseness of a logical argument while sculpture can be pregnant with as much meaning as poetry.

It is this civilisational worldview that we no longer know how to respond to. Since the rise of the Enlightenment, our narratives of the self and the world around have been marked by a ‘subtraction thesis’ (to use the philosopher Charles Taylor’s phrase), which refers to the gradual stripping away of the non-material world-conceptions that our ancestors carried within. In Max Weber’s memorable description, our historical understanding of the worldviews we contain within have gone through a progressive ‘disenchantment of the world’. All our mental models of the world have progressively relied on the thing itself that is understudy rather than to ask what set of correlates could birth such a painting, a worldview or even the world itself.

The Ragamala paintings emerged and sustained themselves in a society where the wholesomeness of the ‘surrounding-world’ (umwelt, as Heidegger called it) was widely understood. As Mark Dyczkowski, the great Tantra scholar, writes, this underlying principle of interconnectedness can be described as ‘all things are by nature everything’ (sarvam sarvatmakam). It is a perspective of the arts, and how to be in the world, that can’t be reconciled with our hypertrophied present. This is especially so in a culture-industry where interdisciplinarian attitudes are often a career risk and, on rare occasions, when artists do attempt to break out of their silos, we find that we do not know what to make of them. We are unable to critically read such experiences for we lack words to see beyond the prisms we find ourselves in. The result is therefore familiar. The Ragamala paintings have become a cultural artefact in the era of globalisation. That they travel the world, from one global mega-museum to another, from one private collector to another should surprise nobody. The logic of cultural exchange in our times can only be understood by a logic of decontextualisation that renders all culture into artefacts, all artefacts into curiosities, all curiosities into objects and all objects, stripped of any meaning, primed for that great God of our times: commerce.

The Code of Money

The Death of Ideals