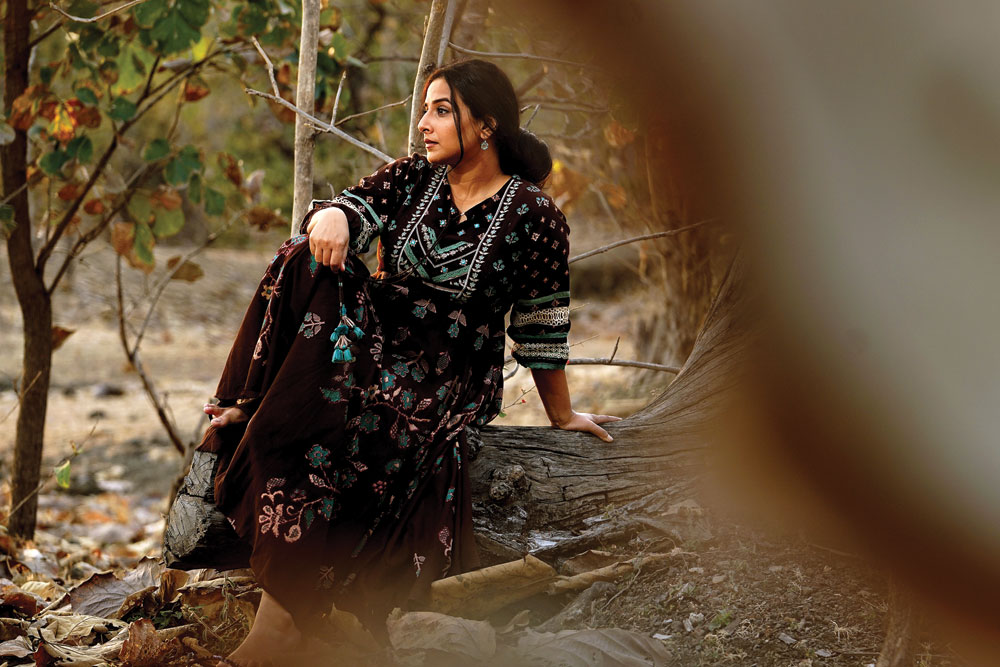 
Anger. Surrender. Laughter. There are three ways of coping with rejection in the Mumbai film industry. Vidya Balan does it by laughing, a great gurgle that begins somewhere in the pit of her stomach, travels through her body and lights up her face. It is not a practised smile, a perfected pout or a weary sigh. It is a laugh that is hard won by the experience of living, its lows and highs and ups and downs. Much of it has to do with her spiritual practice wherein she’s been working with a healer. “I used to pray a lot and always ask for something,” says Balan, “till I decided to be grateful and to thank God for everything I have.”

In the 15 years she has been in the film industry, Balan has earned many titles, such as ‘the Fourth Khan’ for her ability to shoulder movies; and equally as the cinematic daughter of Waheeda Rehman, Rekha, Smita Patil and Shabana Azmi. But the one that sits most comfortably on her now is ‘Mrs India’. In her characters onscreen and in her demeanour offscreen, Balan best encapsulates the new woman. Unafraid to be ambitious, to express her sexuality and to claim her place in the world. In her latest movie, premiered on Amazon Prime, Shakuntala Devi, she plays that rare character: a female genius who is unapologetic about her unique ability. She is not the perfect mother, nor is she content being ordinary when she can be amazing. “She lived life to the fullest,” she says. “She didn’t let gender define her success. She wasn’t guilt-stricken for having a life other than being a mother.”

Intertwined with this is the idea perpetuated by society and Bollywood of the mother as primary and eternal caregiver. In Mission Mangal (2019), where she played Tara Shinde, fictional project director of the Mission to Mars, on the day of the launch, she has to cook poha for the family, give her father-in-law his medicines, sort out a quarrel between her daughter and husband, even squeeze out toothpaste with a rolling pin. “That would never happen with a man,” she says. “Everything around him would be taken care of.”

Even in Tumhari Sulu (2017), where she plays Sulochana Dubey, harried mother by day and sexy-voiced RJ by night, she has to seek her family’s approval before stepping into the workforce. But Balan’s genius is in making these women real, injecting not just an ouch in them, but also an oomph. Watch her calling her husband a “gai” (cow) with a risqué smile in Tumhari Sulu,or responding to his flirtation with just a quiver of her shoulder, which leads to an aesthetically exposed back in an everyday synthetic saree blouse, Balan has put the earthy back into Earth Mother.


Shakuntala Devi lived life to the fullest. She didn’t let gender define her success. She wasn’t guilt-stricken for having a life other than being a mother, says Vidya Balan, actor

Much of this was first tapped in Abhishek Chaubey’s Ishqiya (2010) in which she was Krishna Verma, part pari (fairy), part tawaif (courtesan). Chaubey says the film came to her at the right time, when after the initial success of her Hindu debut film Parineeta (2005), she struggled in finding her niche in a world of Barbie dolls. “It not only discovered something special in her talent and image, but also made her one of the first representatives of the new woman in Hindi cinema,” says Chaubey. This new woman blazed a trail for others. Women who could honeymoon on their own in Queen (2013), or who could have sexual relationships without entering “low IQ” marriages in Piku (2015). Women who could look the man in the eye and suck the blood on the thumb that they had purposely cut in Ishqiya or women who could enjoy their orgasms in solitary splendour in The Dirty Picture (2011). Ask her if she feels the women have followed her path, she merely shrugs her shoulders elegantly.

As scholar Sukanya Gupta notes, in her films, Balan is neither the Sita/Savitri inspired by India’s Hindu mythology nor is she the sex object disseminated by popular culture. Clad in sarees and not devoted to size zero, the women depicted by Balan have tried to keep it as ‘real’ as possible—at least as real as we can get on the silver screen. Yet, she asks, swinging between the prostitute in Begum Jaan (2017) or the working mother in Tumhari Sulu, are Balan’s recent roles really addressing women’s sexuality? Can the new woman in Bollywood, often the primary protagonist depicted with some agency, only be taken seriously, and her achievements and victories are highlighted/celebrated, when her sexuality is not addressed/depicted head on?

Balan’s struggle, after the superlative success of Kahaani (2012), where she travels across Kolkata with a massive baby bump and still manages to crackle onscreen, arose from this convention.

But beginning with Tumhari Sulu, she has managed to reinvent herself yet again as the naughty mummy. It’s a huge improvement on the wasteland of roles for women over 40 in the Hindi film industry. At 41, Balan is choosing her collaborations wisely. In Shakuntala Devi, she is having it all: marriage, motherhood, global acclaim as a human computer, without necessarily, as Balan, wanting “to do it all”. Says Balan: “She said, ‘I am a mother, I am a wife, but I am also Shakuntala Devi.’ She embraced that identity, as much as she embraced her shortcomings. She didn’t expect herself to be perfect but knew she was amazing just the way she was.”

In the short film Natkhat , which she co-produced this year (“Only in lieu of being paid for acting in it,” she says), she is a mother in a ghunghat (veil) trying to save her boy from the world of toxic masculinity represented by the men around him. Her next film, for which she has already started shooting, is Sherni, where she plays a forest officer. The film is directed by Amit Masurkar who helmed the much-hailed Newton (2017).

alan is also drawn to the idea of playing Indira Gandhi, in a web series she has been developing for some time now, with Ritesh Batra, director of The Lunchbox (2013). Indira symbolises power to her in every way possible. “Having been called all sorts of names and having been judged far more harshly than her male counterparts, I think she is still counted amongst the most influential prime ministers we’ve ever had,” she says. Balan has started to trust her instincts when choosing her roles, going after what seems right, authentic, and believable. She radiates calm or as director Milan Luthria likes to call it, “positivity”.“She has an innate positivity with which she reacts to everything, whether it is a difficult beginning to her career, an awkward phase in between, or playing a bold character on screen. She thinks a lot, but when she’s done she lets the positivity take over. What you see on screen, like most great actors, has a little to do with physical requirements of the character, but more with what blazes through from within.”

We spent a lot of time discussing the script. Vidya gives so much of herself to every collaboration that any director can get stuck on her, says Anu Menon, director, Shakuntala Devi

It makes her a dream collaborator, as director Anu Menon found from the time she narrated a one-page script of Shakuntala Devi to her. “We spent a lot of time discussing the script. She gives so much of herself to every collaboration that any director can get stuck on her. The best part of her is that she brings no attitude to the set. With every actor, your first question of the day is ‘What’s the mood?’ before you proceed. Vidya would always take care of herself and carve a space for herself so she could rejuvenate.”

She has built resilience over time, especially the years before Parineeta and after her debut on television in Hum Paanch in 1995. There were 13 Malayalam films from which she was dropped, two Tamil films that were shelved, and even after she stunned Mumbai films with hits such as Parineeta and Lage Raho Munnabhai (2006), she was repeatedly targeted for her dress sense and body weight. The unkind comments for both would have shattered a lesser spirit. But that is what makes Balan unusual. As an outsider, she has seen the worst of the industry—its misogyny, its feudalism, and its dynastic rule. She has understood the glass ceiling that allows insiders to get away with bad behaviour but expects outsiders to be at their most humble and herd-worthy.

But she has, at all times, answered critics who go low, with work that goes high. Increasingly, as Balan’s star ascends it shows society’s assimilation of its contradictions and its comfort in itself. In Balan’s determinedly Indian aesthetic, from body type to dress form, an emerging small town India finds familiarity while the globalised India of big cities identifies with her gender-breaking stereotypes, whether it be successful women in STEM or in the bureaucracy (the forthcoming Sherni).

And in her constant admission of her failings, big and small, they find someone they can identify with. In a world where everyone is her own selfie-made star, Balan’s confessions of working on herself to not take criticism personally or her initial hurt at the cruelties inflicted on her before she found her own groove give us not only a better actor but also an inspiring role model of potential and possibility. Sanskari with sauciness, marriage but not yet motherhood, success with humility, and intelligence with empathy. In a world of ageing Khans and raging man-boys, is it a surprise that fortysomething women are providing the most riveting narratives?