Up in the Air

A film focused more on making Clooney look cool than on the psychological impact of recession. 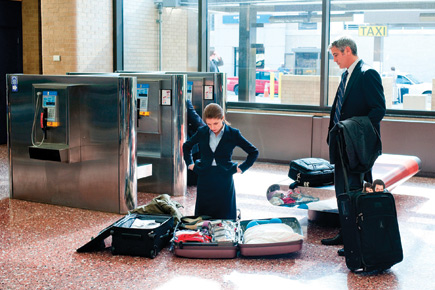 A film focused more on making Clooney look cool than on the psychological impact of recession.


It won’t be long before a ‘transi­tion specialist’, a guy hired by US compa­nies to do the dirty job of personally tell­ing an employee that he has lost his job, will be outsourced to India. But for now, it is Ryan Bingham (Clooney) who messes up his hands and his mind, up in the air and travelling to cit­ies across America, doing the hatchet job.

The perks include clocking up millions of miles for frequent flyer status and occasional­ly sleeping with a woman (Vera Farmiga) who describes herself as just like him, but with a va­gina. Clearly, Bingham is exceptionally well suited to his job because he has no excess bag­gage in emotions, family and friends. His tech­nique is to suggest to fired employees that one, it could be worse and, two, see hope in this sacking as it could just be the opportunity to change your life.

A soul-to-soul salesman of what he knows to be bullshit, Bingham has an understudy, a girl called Natalie (Anna Kendrick), who holds up the mirror to him now and then. She has hu­man feelings, an unfortunate condition to suf­fer from in this occupation, and their mentor/apprentice relationship is supposed to enlight­en us about director Jason Reitman’s perspec­tive on the tough times we live in.

It doesn’t, and we come out of Up in the Air with the feeling of having seen a con job on a con man, presented as a movie of substance about the psychological impact of the reces­sion. In fact, the documentary-style framing of comments from victims laid off are sickening because they are all about Bingham’s ‘cool’ un­der pressure and not about the employees. The focus is on how well Clooney plays this vul­ture, and how great the actor looks as he ages.

Does the director even mention the greed and fraud that led to the lay-offs? He does not. The movie airbrushes its way past the man­agement of the companies that hire Bingham to fire. We hardly see them. Which side is Reitman on anyway?