Frankly, it is quite a relief to see a protagonist in a Hindi comedy who refrains from playing the jackass 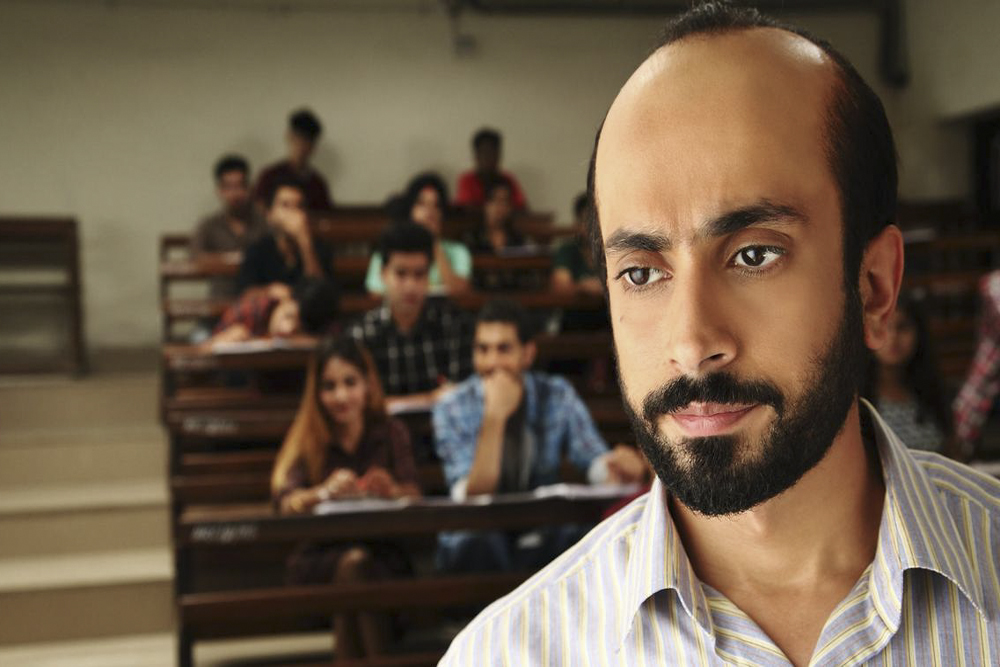 The treatment for male pattern baldness is in relative contraindication to the expectations of an arranged marriage. A man suddenly gets a dramatically receding hairline, and a bald patch at the back of his head, while still in his twenties or thirties. He loses all self confidence. In the process, he even foregoes part of his social identity. The persona formed is complex and develops psychological problems. There is an occasional display of aggression, probably from a need to overcompensate on the early loss of hair. The general aura around the man is one of sadness.

Actor Sunny Singh has done an excellent job of playing Chaman Kohli, a prematurely balding Hindi teacher in his thirties, at a college in Delhi. This remake of the Kannada film, ‘Ondu Motteya Kathe’, holds your attention for most of its duration. Mr. Singh does not alter his expression much, looks consistently unhappy, and so a lot of the humour and emotional bonding in the movie takes place because of an audience empathy for his condition, and his morose presentation of it.

Frankly, it is quite a relief to see a protagonist in a Hindi comedy who refrains from playing the jackass. Chaman’s pensiveness comes from a feeling of being dealt the wrong cards, and being blessed by his genes with baldness – twenty years too early for dates, marriage or hook-ups.

Were it not for the exaggerated behaviour of his unruly students at Hans Raj College, scenes that are completely over the top, ‘Ujda Chaman’ would have been a much more relatable film. And better.

In reality, if students keep laughing at balding Professors, as they do in this film, the campus would turn into a Laughter Therapy Club. The perpetual conversion of classrooms to sets for a ‘Big Boss’ kind of humiliation of students or teachers in Hindi cinema is one of the worst cliches of the medium.

This tendency is probably reflective of the anti-intellectual stance in popular culture. Every college campus is turned into a joke – with boring or ridiculous teachers, pompous principals, students who behave either like fashion models or gangsters; in short, a circus display of an institution. It is like saying, in as many words, that this is what higher education is all about.

Professor Kohli’s pushy Punjabi family, wracked with faux anxiety at the absence of a matrimonial alliance with a Chopra or Khurana or Khanna, drives poor Chaman to a ‘Tinder’ alliance. He crops his photo judiciously and gets an answer from a lady who has done some photo shopping herself.

When Apsara Batra (Maanvi Gagroo) shows up, the movie comes to life once again. With a generously proportioned physique, she has the sweetest and most expressive face in recent films. With her eyes alone, she indicates hurt, humour and kindness, and succeeds in bringing texture, feeling and focus to the movie.

So ‘Ujda Chaman’ does fall prey to a few rom-com cliches in the middle. But it perks up later on, and treats us to some delightfully well played and resonant scenes between the lead actors, sequences that bring a measure of proportionality to the film.