The cinematic evolution of the countryside sends out a social message 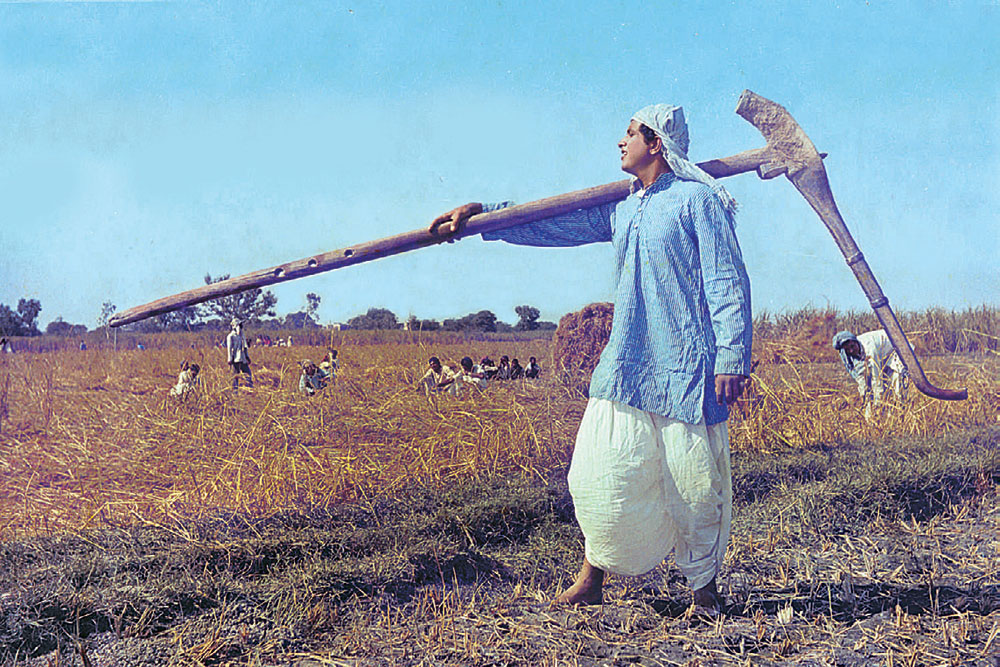 
I KNOW NOTHING ABOUT agriculture, even though my family were farmers three generations ago. I stayed on farms as a child and enjoyed milking a cow and the lambing season, but it was muddy and smelly. I’m far too sentimental about animals to pass muster in the country. I never ate rabbit after hearing that Mr McGregor put Peter Rabbit’s father in a pie. I am an urbanite, my life tied to the seasons through the garden, not the farm.

Farming in the UK and India are very different. One of the surprises for a first-time visitor to India is that animals are not seen in fields as much as on the streets.

I count forestry as part of farming, and in ancient India, there were many kinds of forests. The Arthashastra requires the king to maintain gajavanas, forests that would allow for a large population of elephants, while the ascetics lived in tapovanas, and there were plantations of sandalwood trees.

Religion is closely tied to farming: Jesus was the Good Shepherd and the Fisher of Men, while Krishna grew up as a cowherd in a land rich in butter and milk. Pastoral poetry evokes the world of farming, whether in Virgil’s Georgics or Dayaram’s lyrics of Vrindavan. Rural novels have remained canonical texts from Thomas Hardy to Premchand. So, it is not surprising that we find farmers in many Indian films.

Some of these were associated with leftist writers and filmmakers. Kisan Kanya (1937), said to be the first colour film, was scripted by Saadat Hasan Manto. It is a tale of oppressed peasants, while Dharti Ke Lal (1946), written by KA Abbas and Bijon Bhattacharya, and produced by the Indian People’s Theatre Association (IPTA), concerns a family during the Bengal famine of 1943. The first Hindi film that Bimal Roy and the team that migrated to Bombay from New Theatres, Calcutta, made was Do Bigha Zamin (1953), whose story Salil Chowdhury took from Tagore’s poem, ‘Dui Bigha Jomi’. The beautifully made film about an impoverished farmer (Balraj Sahni) working as a Calcutta rickshaw-puller to earn enough to buy his eponymous two acres of land, is in the neo-realist style, after the makers were inspired by seeing Vittorio de Sica’s Bicycle Thieves (1948) at the first international film festival in Bombay in 1952. It has great songs, including ‘Dharti kahe pukar ke’, based on one sung by the Red Army.

Bimal Roy’s 1955 adaptation of Sarat Chandra Chattopadhyay’s Devdas showed the other side of rural life, this time the zamindar, not the farmer, while his Madhumati (1958) revealed the tensions between the timber estate manager, Anand (again Dilip Kumar) and Raja Ugra Narain (Pran), the landowner. There is a sharp divide between the foresters and the Tribals, including Madhumati (Vyjayanthimala) and her father, Pawan Raja (Jayant), who are more in tune with nature.

The theme of forestry was taken up by other greats of the 1950s—in BR Chopra’s Naya Daur (1957), through a central character, a woodcutter working in a sawmill, whose modernisation was the main tension in the drama, setting the stage for the race between the tonga and the bus.

Pakeezah (1972) shows the hero, Salim (Raaj Kumar), as a forest ranger, though one poetic enough to write the note he leaves between her toes –‘Aapke paon dekhe, bahut haseen hain. Inhein zameen par mat utariyega… maile ho jaayenge (I saw your feet; they are very beautiful. Please don’t put them on the ground…they will get dirty).’

The great rural film of 1950s Hindi cinema, if not of all time, remains Mehboob Khan’s Mother India (1957), which presents the nation as woman, but also the woman as nation. Mother India was a ‘secular’ goddess created by the nationalist movement in the 19th century. Radha (Nargis) is also associated with other goddesses and the film abounds in mythological references to Krishna, Ram and other deities. Although many of those involved in the film were Muslim (including Nargis, Mehboob and Naushad), the film refers only to Hindus, the village notably not having any Muslim residents.

The golden moments for the agricultural family are celebrated. A wonderful song ‘Dukh bhare din beete re bhaiya’ (a Nehruvian version of achhe din?) where the harvest celebrations end with the village dancing among sheaves forming a map of undivided India.

The film has a deep ambivalence, which is never resolved. On one hand there is the traditional Indian village, where life is grim. The main image is of a mud-caked Radha (Nargis) carrying a plough like an ox. However, this is lightened by moments of pleasure celebrated in song. On the other hand, there is a utopian modern India of dams, machinery and the state itself, where life’s needs are provided for but at the cost of enormous human sacrifice and misery.

The other major iconic film featuring farmers was Upkar (1967), where Manoj Kumar plays Bharat, a farmer and soldier who promotes Lal Bahadur Shastri’s slogan “Jai Jawan, Jai Kisan”. Upkar contrasts decadent Westernised lifestyles in nightclubs with the noble life of the farmer and the soldier. The heroine, a doctor (Asha Parekh), negotiates the gap between these groups, as she works in the village, arguing they are all social equals. The patriotic song, ‘Mere desh ki dharti’ is pictured like a developmentalist documentary, where we see irrigation, including Persian waterwheels, slings to drive off birds, and crops in the field, with Bharat carrying the plough, all reinforcing his name, meaning ‘India’.

Rural themes are found in Shyam Benegal’s classic films of the 1970s, such as Ankur (1974), where the wealthy Surya (Anant Nag) is a farmer while the poor characters are potters. His Manthan (1976) is about the White Revolution (dairy), inspired by Verghese Kurien and his dairy cooperative in Anand. The veterinarian Dr Rao (Girish Karnad) challenges the local dairy owner Mishra (Amrish Puri), helping the local dairy farmers to form a cooperative.

Two films starring the top stars at the turn of the century had agricultural settings. Aamir Khan’s Lagaan (2001) has Indian villagers uniting to play cricket against the British in order to cancel the agricultural tax or lagaan, while Shah Rukh Khan’s Swades (2004) has very Gandhian overtones, often focusing on caste issues as well as bringing irrigation to the village.

It is surprising that two comedies engaged with the theme of farmer suicides. A satire on the media, Peepli Live (2010) was about the problems of village life, not least of which is farmer suicides, but had the protagonist migrate to the city as a labourer as even urban poverty is better than village life. The Marathi film, Gabhricha Paus, was about a woman’s fear that her farmer husband would commit suicide.

Punjab is seen as the bread basket of India, its fertile land producing abundant crops, especially the fields of bright yellow mustard so beloved of Yash Chopra and other filmmakers. Images of well-off farmers driving tractors and celebrating festivals feature in many films with major stars like Namastey London (2007), Rang De Basanti (2006) or Veer-Zaara (2004).

However, in the last 10 years, in terms of its filmic depiction, Punjab is no longer the nice and wholesome centre of the Green Revolution, but a sinister place. NH10 (2015) has the village as a dystopia of ‘honour’ killings and murder, while Udta Punjab (2016) shows agriculture used as a front for heroin dealing in drug-ridden rural Punjab.

Usually, the small-town setting is in Uttar Pradesh, more of a crime scene than a place to raise crops or livestock. Dabangg (2010) is not about farmers, but does have indisputably the best fight scene of all time using agricultural instruments. Chulbul Pandey (Salman Khan) and his enemy, Chedi Singh (Sonu Sood), battle it out, after Salman’s expanding muscles make his shirt rip and fly off.

Two Marathi (and Kaikadi) films by Nagraj Manjule don’t look at farmers directly, but examine rural caste oppression in Fandry (2013), where the Kaikadi community is responsible for the village pigs, and Sairat (2016), an intercaste love story. The village is seen as a place of endless oppression, the farmers as wealthy landowners and the low-caste poor barely existing on its fringes.

OTT series deploy the violent small-town trope (for example, Mirzapur), while the village is seen in more gentle settings such as Panchayat, where the locals are not bumpkins but canny operators who outsmart the city-dwellers.

I don’t know of a word in an Indian language that is equivalent to the English ‘countryside’.

Perhaps a new type of countryside is emerging in India with the elites desiring to live in more peaceful rural settings (with good internet), sometimes taking up organic farming or flower growing. There is also much interest in farm stays with tea estate owners or coffee-farmers in Coorg for urbanites in need of some ‘forest bathing’. You live with the family, while the workers are seen only outside the house.

Zamindari has been abolished and wealth is not focused on land but on industry, business and commerce. Perhaps, the major vestige is the ‘Delhi Farmhouse’, famed more for its parties than its agriculture.