Thappad: A Slap on Patriarchy 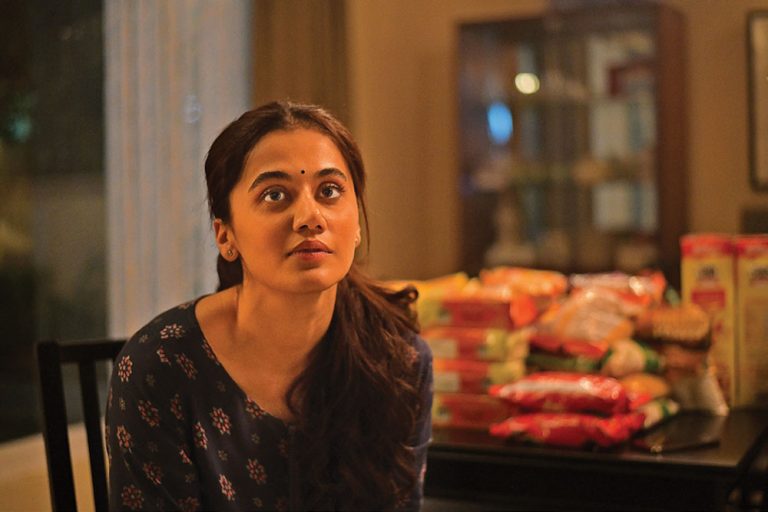 
When Anubhav Sinha’s latest cinematic offering, Thappad came out towards the end of February, it had already been the subject of some debate, and was sure to generate more. The trailer revealed an unconventional and bold premise – a housewife, portrayed by Tapsee Pannu, decides to divorce her husband after he slaps her. In addition to the interpersonal tumult between the couple, the trailer also showed various aspects of society that Tapsee’s character must contend with – family, friends, and the legal system. Sure enough, Thappad’s release lived up to the promise of a thought provoking film that has led to discussions around difficult questions which have traditionally been brushed under the carpet in India.

The film’s central question is repeated multiple times in the narrative as we see Tapsee navigating through dilemmas, internal and external. Is ‘just’ one slap enough reason for a woman to seek divorce? In doing so, the film closely examines our attitudes towards domestic violence, both as a society as well as a legal system. The woman facing abuse is constantly questioned and second guessed. Is she making more out of it than needed? Couldn’t she just move on? In portraying the reactions of those around her, the film reveals widespread apathy towards women’s issues.

Purportedly educated and well-meaning people constantly trivialise the slap, ask if there is more to it – is he cheating? Is she having an affair? Clearly a man raising his hand to his partner is not taken seriously, its scale and harms constantly diminished as society gets to work telling the woman that what happened to her was not a big deal. In a country where domestic violence is an acknowledged problem, it reveals that even in the higher reaches of the class division, patriarchy and misogyny continue to protect perpetrators of abuse.

Thappad takes Bollywood’s usual idea of feminist discourse a little further, discarding obvious motifs for a more nuanced and therefore more challenging look at issues faced by Indian women. Tapsee’s character is not a high powered professional with complete economic empowerment, but instead a housewife who cooks for her husband and takes joy in having created a household. At the same time, she is not the docile housewife that has been the staple of Indian narratives – while she supports her husband and cares for him, she does not tolerate his abuse, and takes on a challenging fight despite widespread opposition.

There is no contradiction or dissonance between Tapsee as the caring wife and as a woman fighting for her right to exit a marriage after her husband’s actions shatter her idea of the loving relationship they share. While traditionally films have subsumed personas of female characters within those of males around them – as wives, daughters, sisters – Thappad resoundingly reinforces their individuality and autonomy. It also shifts the focus to the men who are perpetrators of domestic violence and the dynamics of a marriage and family. While the husband’s lashing out is explained away as a consequence of stress at work, he asks his wife to ‘move on’, without as much as apologizing a single time for his actions. The assertion of a traditionally masculine ego does not allow him to introspect and truly seek redemption from his wife, but instead focuses on browbeating her into not continuing with seeking divorce. On the other hand, it shows her father as a conflicted figure – while he accepts and supports his daughter’s decision to seek a divorce, one can see that he is quite distraught by the very concept of divorce – shining a light on the gulf in attitudes between generations. The film manages to convey so many different aspects of a domestic dispute, and does so with immense sensitivity.

Anubhav Sinha has distinguished himself as a filmmaker with a difference in the past, with Mulk and Article 15, films that make audiences confront some of the most painful and divisive topics in our country – religion and caste. Now, with Thappad, Sinha has hit a hattrick of socially relevant films that get us talking and usher in change. Tapsee Pannu’s performance only solidifies her image as one of Bollywood’s brightest rising stars, her lack of training in acting or theatre an irrelevant footnote to her enthralling performance.

Together, Tapsee and Sinha have delivered a very important film at a time when audiences have displayed a willingness to try new, nuanced and socially impactful films. This is a trend in Indian cinema worth celebrating and encouraging – as the stories that matter and touch our lives are told better and louder, they are sources of inspiration, strength and a springboard to start important yet neglected conversations. Perhaps the biggest, crispest Thappad has been delivered to patriarchy, and it’s a beautiful start.

Vani Tripathi
The author, a former secretary of Bharatiya Janata Party, is an actor and a member of CBFC