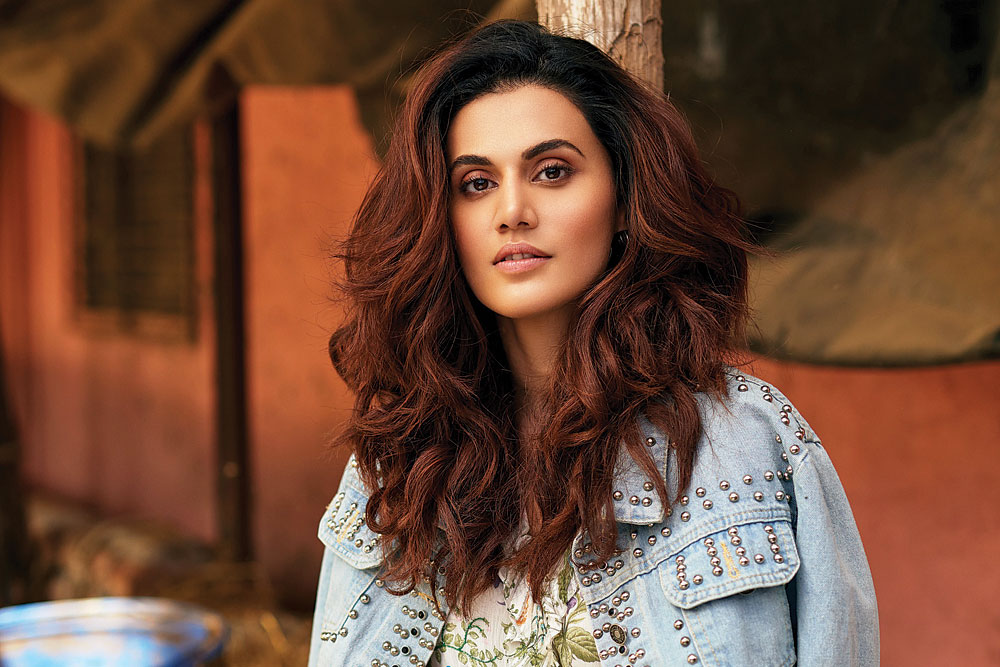 
IT’S 2016. PINK has just released and Amitabh Bachchan is walking into an event. Taapsee Pannu is already there, posing for photographs. She sees him and asks, “Tu kaisa hai [How are you]?,” with great ease and familiarity. Bachchan replies in the same vein, with obvious affection.

Cut to 2017. Taapsee is at another closed-door event, where a corporate executive, clad in suit and tie, has just taken a picture of her in conversation with another actor. She speaks up, “Excuse me, did you take my permission before shooting that? No, right?”

Now cut to 2020. Taapsee is at the Delhi premiere of her new film, Thappad, very much the centre of attraction in the presence of two star directors, Anubhav Sinha and Vishal Bharadwaj. This is the first time she is watching the complete film, and she says she is nervous, excited and exhausted.

A software engineer by training and an increasingly aware actror by practice, 32-year-old Taapsee is one of Bollywood’s most confident young stars, one of a handful around whom films get planned and green-lit. Last year, she had four releases: the Indian version of a Spanish thriller, Badla; the bilingual (Tamil, Telugu) Game Over; the ensemble film, Mission Mangal; and the female buddy biopic Saand Ki Aankh. Together they made over Rs 300 crore at the box office. Next year looks equally busy. After Thappad releases in February, she awaits the release of two sports movies Shabaash Mithu, based on Indian women’s cricket captain Mithali Raj and Rashmi Rocket, the story of a Gujarati track star, and a thriller, and Haseen Dillruba, for which she is shooting currently in Haridwar. All this while also announcing she will be in the Indian adaptation of Tom Tykwer’s 1998 breakout German film, Run Lola Run.

But she hasn’t got here by accident. It has been a relentless grind, starting with the Femina Miss India contest in 2008. Taapsee, all frizzy hair and bright smile, didn’t get into the final 10 but she did win two consolation prizes, Safi Femina Most Beautiful Skin and Pantaloon Fresh Face. Within two years, she acted in a Telugu film, Jhummandi Naadam, directed by K Raghavendra Rao, produced by Lakshmi Manchu and starring her brother Manoj Manchu, and by 2011, she was in Vetrimaaran’s Aadukalam, alongside Dhanush. Her roles down south were restricted to the typical heroine, and in stills from films of that time, she is often clad in outlandish costumes, which reveal expanses of flesh while she tries her best to look nonchalant. The pattern of being the decorative after-thought, at the mercy of the director’s whims, was repeated when she made her debut in David Dhawan’s remake of the beloved 1981 comedy Chashme Baddoor in 2013.


Having earned her dues playing by the rules of the industry so far, Taapsee is clearly here to change them, lending her 5’7’’ frame to movies that would otherwise never get made, or if they did, never see the light of day

Little wonder then that when she auditioned for a 20-minute role as a spy in Neeraj Pandey’s Baby (2015), the director had no clue who she was. He says, “She auditioned. She had been trying to meet up for a long time. Her audition lasted for not more than a couple of minutes if I remember correctly. She was really good and just right for the role. And then she trained and got even better. She was eager and hungry. That generally helps.”

Indeed. That got her noticed and a year later, Pink, catapulted her into everyone’s imagination. As Minal Arora, who accuses a man of sexual assault and is in turn accused of being a prostitute, Taapsee was angry, confused, spirited, but eventually courageous. Pink was her watershed moment, when she realised the power of following her gut instinct. And when the world realised what she could do. That she should focus on the story, and the character would follow.

Anubhav Sinha, director of Mulk (2018)—where she played a feisty lawyer fighting for her Muslim father-in-law’s human rights—and Thappad, says Taapsee jumped at the idea of acting in Mulk even before knowing what character she was playing. Thappad, he says, came out of a stray conversation he was having with her on the sets of Mulk about making simple films, such as a ‘good husband’ hitting his wife for the first time. It was something she immediately insisted she would do—she has often said she is greedy for good scripts. She is also willing to put in the hours, do the hard work. “When she’s working she forgets who she is. She is almost obsessed in the way she approaches her character,” he adds. She learns by observing others, and while she imbibed discipline from Amitabh Bachchan, the relentless pursuit of work is an in-born trait, honed from Akshay Kumar. She watches those around her, learning from their errors and their virtues.

In Thappad, as the wife who walks out of her picture perfect marriage because of ‘just one slap’ from the husband, she uses her silences eloquently. Whether it is talking about regaining her self-respect or showing her shock in the droop of her shoulders, Taapsee is convincing as the woman who has allowed herself to be turned into a doormat. She isn’t perfect in the film, neither is the film, but the film ignites a conversation about gender equality in marriages.

Having earned her dues playing by the rules of the industry so far, Taapsee is clearly here to change them, lending her 5’7’’ frame to movies that would otherwise never get made, or if they did, never see the light of day.

There is nothing coy about her and, certainly, there’s no insecurity. Born to Sikh parents based in Delhi, she and her sister, who runs an event management company, live on their own in Mumbai, as she slowly rises up the slippery slope. There is a physical presence about her, which comes from training in Kathak as well as a lifetime of playing sports. This has helped her, whether it was during the two and a half months she devoted to learning Aikido, Krav Maga and mixed martial arts for her role as a spy in Baby or whether it is learning the cover drive to play Mithali Raj. Even for Run Lola Run’s Indian version, Tanuj Garg, managing partner, Ellipsis Entertainment, one of the producers, says, not only did they need a terrific actress, they also needed someone who was physically fit. “She also needed to be evolved enough to understand an unusual and unconventional new generation subject. We could not have asked for a better Lola,” says Garg.

She asks tones of questions, which is a pain the bottom but totally worth it, says Sujoy Ghosh, director

Directors adore working with her. Sujoy Ghosh who directed her in Badla says she is super fun because she is super unpredictable: “She comes up with a new version every time so that’s great. She asks tonnes of questions, which is a pain in the bottom but totally worth it.” Tushar Hiranandani agrees, “When she champions a movie, she does it whole-heartedly. In my case, she heard the narration of Saand Ki Aankh and was on board instantly. After that, we had to wait for over two years to get the other part cast, which eventually went to Bhumi Pednekar. But she never wavered. She stood by us throughout.”

What makes her stand out is her confidence. In her own head, she is an enormous star, but that is not her ego talking. Rather it is her talent, says Hiranandani. Much like Bollywood’s other curly haired star, Kangana Ranaut, with whose sister Rangoli Chandel she has had clashes with on Twitter, Taapsee brings all of herself to the table. She chooses women-centric movies because she believes in them, says Hiranandani. And she understands that it is an art as much as it is a commerce, he adds.

Taapsee is finally finding her feet, making an identity of her own. She knows she is an outsider and will never get as many chances as a star child. She will have to prove herself over and over again. But she is surrounding herself with smart people—returning to work with directors such Anubhav Sinha and writers such as Kanika Dhillon. She has also decided to speak her mind in public, whether it is showing up for the protest against the Citizenship Amendment Act and the National Register of Citizens at Carter Road, Mumbai, or shutting down trolls who wonder why she is voting from Delhi while working in Mumbai. Or even those who dub her the industry’s “female Ayushmann Khurrana”. Why not the, “Pehli Taapsee Pannu?” she asked.