The agility and vulnerability of Tibetan verse 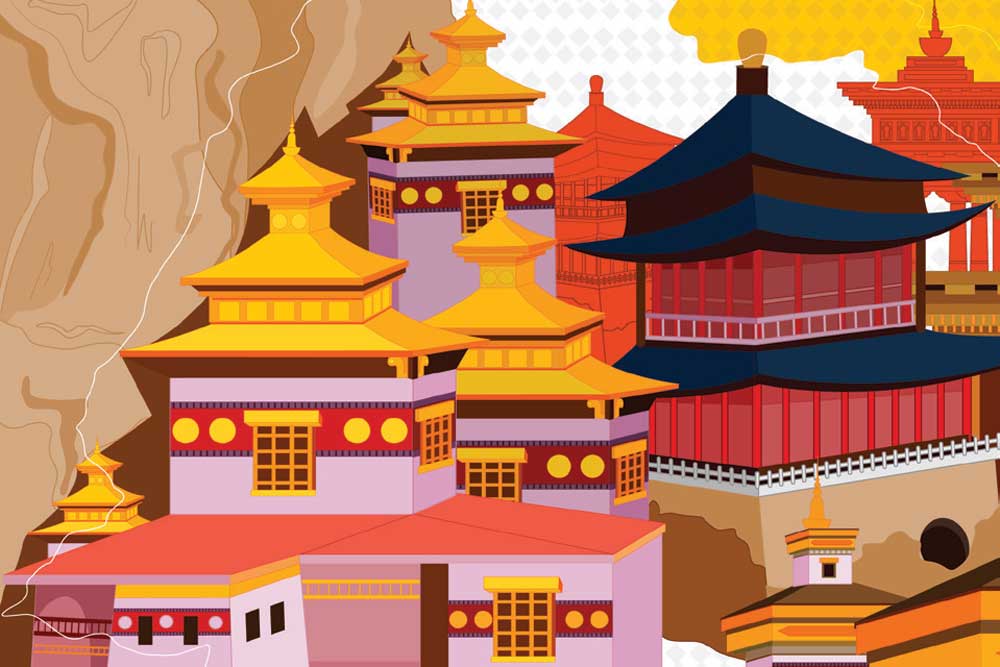 TRANSLATIONS INTO ENGLISH of poetry written in occupied Tibet are rare. Modern Tibetan literature, for an English reader, has largely meant literature written in exile, as the situation made proximity to English and its cultures possible for these communities. There are also dominant narratives, like the millennium-old one of Buddhism, and of revolt, intimately tied to Tibetan language and identity, which have bred preconceptions, something the reader must overcome to appreciate the poems in Burning the Sun’s Braids on their own terms.

A variety of voices resound across the pages of this bilingual anthology, ranging from song-like outbursts with run-over lines, to attempts at paring down language to sing a ‘skeleton- coloured poem,/ with a tiny little hole in it,’ a language so devoid of referential detail that even a banal sketch, like Chen Metak’s This Morning, begins to appear uncanny. Then there is the feverish surrealism of poems like Lhasa Diary by the same poet, where he turns to face the ‘fangs of darkness crowding in the dark holes…[that] will/ Cut your sunrays into pieces,/ Bringing the second black night/ That even the lamps of your history cannot extinguish’ or Snowfall in my Hometown by Dhung and Further Investigation for this Man by Ador, reminiscent of the atmosphere of Mayakovsky and Bulgakov. There are also tender, formal love poems, like Farewell Words written by the environmentalist Khawa Nyingchak, who drowned at the age of 26 while preventing the Chinese from poaching endangered fish in Kokonor Lake: ‘Don’t say the wind of karma is harsh/ Or the attachment of mind too heavy,/ Using your hands you found the footpath/ You are indeed very fortunate.’

The note introducing each poet reminds us that the cultural equivalent here to a writer’s residency or a generous grant is a jail sentence. In the face of such ground realities, poetry that draws on human experience, shunning |traditional metrical constraints, and wrestles to break free of stereotypical images of the Land of Snows, becomes vulnerable and agile like a ‘doe on a rain- drenched rocky hill’.

It is bold enough to write a paean to the Dalai Lama, as Gartse Jigme does in Moon of the Heart (Jigme is in jail as we read this, having received a six-year sentence in 2013), or as Theurang writes in News from Hell: ‘Because of an intensely cold wind,/ Those in hell experience a disturbance in temperature/ So many suffer from contagious colds.// However, the news from hell, as usual, is always fine and good.’

With further awareness of contexts—that only a handful of world literature texts have been translated into Tibetan and are available in Tibet, where Borges and Baudelaire are read in Chinese—the English reader can slowly begin to digest the heartfelt and non- ironic lyricism often encountered in the pages of Burning the Sun’s Braids.

“All the writers collected in this anthology have one thing in common,” translator Bhuchung Sonam tells me, when we meet in McLeod Ganj. “The way they write and what they write about is based on what they have seen and personally experienced.” In this stance, many poets here strike resonance with those of the Russian Silver Age, a stance that perhaps Anna Akhmatova’s Instead of a Preface sums up best: ‘In the terrible years of the Yezhov terror, I spent seventeen months in the prison lines of Leningrad. Once, someone ‘recognized’ me. Then a woman with bluish lips standing behind me, who, of course, had never heard me called by name before, woke up from the stupor to which everyone had succumbed and whispered in my ear (everyone spoke in whispers there):

‘Can you describe this?’

Then something that looked like a smile passed over what had once been her face.’