Sanjay Mishra: ‘I am here to be an actor, not a hero’

Sanjay Mishra and the raw intimacy of being rooted 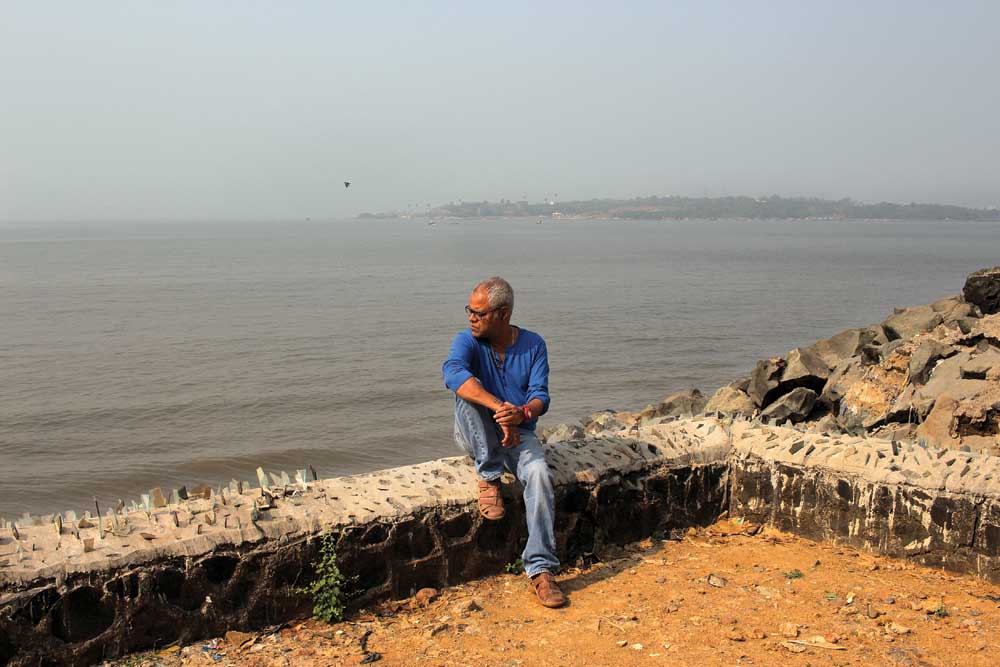 THE IDEA OR image of the socially conscious actor died with the 90s. Up until then, there was an army of actors and directors in Hindi cinema who would indulge in latent activism through their work. Shyam Benegal’s Mandi (1983), Govind Nihalani’s Ardh Satya (1983) and Mani Kaul’s Uski Roti (1970) are part of a family of films that tried to inculcate change within the viewer and society at large. Or we could just say these films showed the reality of life in rural India. Time spent with Sanjay Mishra makes you wonder if he is a missing chip from that era.

The man who grew up in cities such as Benaras, Patna, Delhi and Bhopal is a rare actor today who is trying to say something through the characters he plays, rather than simply flaunting his skills as a performer. When you walk into his residential building in Versova, Mumbai, you are likely to spot him watering trees or planting a sapling or cleaning up his front yard. Why? “Because I would have done the exact same thing if I was back home in my village,” he says. It’s not an easy attitude to keep up, especially when you are part of an industry where every creature comfort and household service is taken for granted—as long as you are popular with audiences. But Mishra chooses to be different.

His compact apartment, complete with incense sticks, tanpura musicand herbal tea, reflects the space he wishes to create for those around him. “Closer to nature, closer to the sounds and music of the world,” as he describes his ideal home. His latest film Kadvi Hawa on climate change released in theatres in late November. The film, he confesses, was a brutal yet important wake-up call for him, leading him to change the way he lives his everyday life.

“We read about climate change, we feel it in our immediate environment, yet there is something that keeps us from acknowledging it. Maybe it is fear. Maybe it’s because we have been so responsible in destroying our environment that we don’t want to own up to it. But the film forced me to look at the issue and made me realise that it’s as personal for me as it is for a farmer who is directly affected by climate change,” says Mishra, who plays the role of a blind farmer trying hard to relieve his family from the trauma of debt and thus find meaning for his own existence. “I wasn’t just this character. I had to remember that I was the face of a man who is most affected by climate change in the country, our farmer. I had to feel his helplessness, or else I would never be convincing enough.”

If not for Mishra, Kadvi Hawa wouldn’t have been the film it is. He doesn’t just perform the part, but lives it. Within the inherent tragedy of the situation, he even manages to evoke humour. Conveying the inner conflict of a farmer without disempowering him is something only a fine actor can pull off, and Mishra is flawless in that aspect. A scene where he goes in search of his missing son and falls to the ground clawing at dry mud like a madman speaks to you directly—to a point that it makes you squirm.

“I met a blind man during the research of the film and asked him just one question. ‘When I wake up I see the morning sun. What do you see when you wake up?’ He said he doesn’t see, but he hears. That response changed my outlook towards this part and I started drawing all my inspiration from the sounds around me. That was the driving force behind this part, how he reacts to the sounds that the wind around him carries,” he says.

He lived in mud huts, ate and drank what villagers would offer and slept on charpais under the trees to get a sense of what a farmer’s life is really like. But the physical experience of the film was just a part of it. “Certain roles change you forever. Not because of what goes into the performance, but because of what you take back from it. I realised that we live in a world where we are fortunate we get to sit in our air-conditioned houses, where there’s water in the tap and food to eat whenever we like.

I had to remember that I was the face of a man who is most affected by climate change, our farmer. I had to feel his helplessness”

In the same world, we see a 10-year-old walking for 10 miles to get a pot full of water. Isn’t that a huge imbalance? And how do we fix it?” he asks.

Twenty-seven years ago, when Mishra came to Mumbai in search of work, these were not questions he could afford to ask. The question was of basic survival and getting work on an everyday basis. “I came from a home where we’d eat boiled rice for lunch, and serve polished rice only when there was a guest. Today, people eat the same boiled red rice and call it ‘organic’ and ‘healthy,’” he says with a laugh.

Like many of his contemporaries, he did everything from teaching music to writing poetry to keep himself busy. But the struggles slowly paid off. “When Bunty aur Babli (2005) released, I remember I was going from Delhi to Dehradun with my father and uncle and we stopped at a toll booth. The guy there smiled at me and said ‘Inse ticket nahin lenge’ (We won’t charge him). It was the first time my father had an expression of approval on his face for the work I do. But it was also when I realised that I was in a profession where I could create change if I wanted to,” he adds.

When he wasn’t shooting, he’d often take out time and go to Chitrakoot town in Madhya Pradesh to clean the ghats. “We would do this so the pilgrims who came to the ghats wouldn’t slip and the garbage wouldn’t pile up. It gave me a sense of purpose in the midst of asking for roles back here in Mumbai. It kept me in touch with the world we live in and those were the kind of parts I always wanted to play,” he says.

In his 30 years as an actor, Mishra has of course played many roles. He was always known for his comic timing, especially early on in TV shows like Hip Hip Hurray (1999) and Office Office (2000), but it was much later in Rajat Kapoor’s Ankhon Dekhi (2013) that he came into his own. He was a natural performer, but by his own admission Ankhon Dekhi broke the façade he had built for himself.

“The industry is great at stereotyping someone and it takes a lot of effort to break that label. I was labelled the ‘clown’, the ‘joker’, the man with great spontaneity, but I was looking for more and Ankhon Dekhi was that. Jo role tumko zindagi ke maine sikhaati hai, woh role se kai zyada ban jaata hai (A role that teaches you the meaning of life, becomes a lot more than just a role),” he says about Bauji, a character going through his own existential crisis. “People would come up to me and share how they were finding it difficult to get their daughters married. They would tell me how they have been in the same job for 40 years and they have forgotten what it is like to feel happiness. That’s the kind of impact that film had.”

That is perhaps why he has started leaving Mumbai more often after that film. “I was getting more work, but I would crave to cut myself off and go into spaces that are closer to nature, closer to people with less material wealth. I started feeling more responsible for the ideas my character put there and the political opinion I expressed through them,” he says.

In 2017, we saw him in five films, each with a distinct voice. He was a teacher in Newton. He was the corrupt, misogynist VC in Anaarkali of Aarah. Both films had a strong stance on subjects like abuse and casteism. “I’m happy that there is a whole section of films coming along these days that are saying something of relevance. I may play a negative part like the one in Aarah, but what the film was trying to highlight overall was more important,” says Mishra.

Today he relishes the fact that he has many roles to choose from. He knows he doesn’t have all the answers to the questions his films may force him to ask. But he isn’t disturbed by them either. He is happy to be the kind of actor who feels a social and moral responsibility towards his audience and the space he lives in.

“The night before last, I was in a village in Rajasthan because I just felt like seeing how they live their lives. Ten days ago, I was in Jharkhand and I befriended an Adivasi family there. I bought a lot of vegetables, cooked my own food. People from my production team were confused because I wasn’t demanding a vanity van or complaining about the heat. It’s just that I take these opportunities to remind myself where I really belong,” he says.

He was never the hero of a film, and he never chose to be one either. “Today when someone says ‘I am here to be a hero’, I say, ‘Hero banne aaye ho, ya actor?’ (Do you want to be a hero or an actor?). I was here to be an actor. Even now, I am trying to become one. Even today, I am still searching for myself as an actor,” he says.