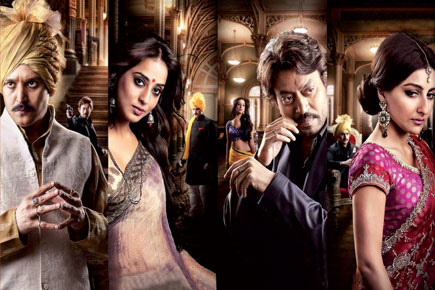 
This is a movie that soothes jangled nerves and keeps you in ‘Nawabi’ mode for the duration. Men and women have conversations and do not just regurgitate rehearsed lines. India’s motion to abolish privy purses may have been passed in 1971, but former royal families still have enough land and local clout to influence electoral equations in Uttar Pradesh. By replacing ‘Ghulam’ with ‘gangster’, Saheb Biwi Aur Gangster Returns updates the old noblesse oblige culture and thrusts it into modernity—or what passes for it.

The ‘Gangster’ is a local operator called Indrajeet Singh (Irrfan Khan) who is getting it on with Ranjana (Soha Ali Khan), the classy daughter of Birendra Pratap (Raj Babbar). It is never made clear what she sees in this smooth-talking con artist, nor is their professed love convincingly described, but she does give him access to the ‘Saheb’ and the ‘Biwi’.

Both noble relics look surprised whenever they surface to see the cruel and transactional world that surrounds them. These scenes are done very well, particularly by the ‘Biwi’ (Mahie Gill). She is always fashionably tipsy, even in the morning, and sleepwalks—until she suddenly realises that the carpet is being pulled from under her by her ‘Saheb’ (Jimmy Shergill). Then she transforms herself into Madhavi Devi, the princess who can win elections.

Director Tigmanshu Dhulia’s skill is in the ability to keep a very steady film tempo. Even in an action film like Paan Singh Tomar, he does not change his rhythm from one scene to another, not even in the climax, and this even beat assures viewers a convincing narrative.

The problem Dhulia has in this film is different. He has devised characters, scenarios, costumes and locations. But he hasn’t thought of motive, purpose or direction. There is just is no story, and so we waft from one lovely scene to the next, coasting along comfortably, until we get to the end and ask: ‘So what was that all about?’