Richard Curtis defined love for a generation. He is now trying to create a more equal world. The British director in conversation with Nikhil Taneja 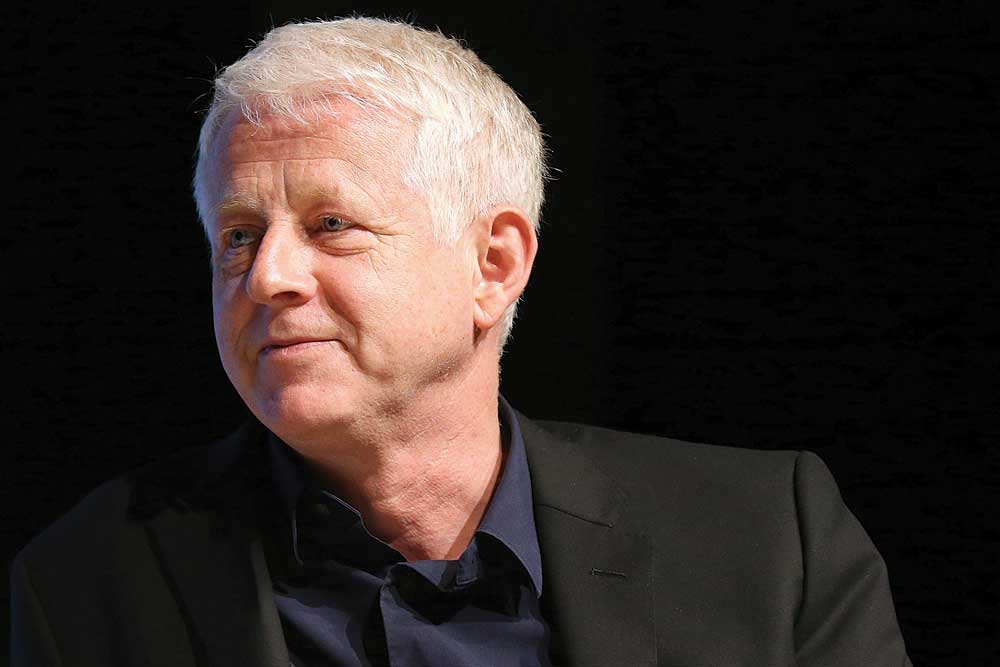 FOR ANYONE WHO’S fallen in love during the 90s and early 2000s, there’s a good chance that writer- director Richard Curtis’ films influenced your ideas of romance. The man behind the iconic Four Weddings and a Funeral, Notting Hill, Bridget Jones’ Diary and Love Actually (and also, TV classics like Blackadder and Mr. Bean), put up his filmmaking boots with his 2013 film, About Time to pursue his other passion: helping to make the world a better place.

Curtis reached his pinnacle in the early noughties with his feel-good, look-good cinema. He was often accused of being a ‘Little Englander: Setting on celluloid a nation in which the upper middle-classes, after a series of comic misunderstandings, finally manage to blurt “I love you” on a snowy Christmas Eve…’ (The Guardian). But the one quality that distinguishes the British screenwriter, producer and film director from his greyer peers is his boundless optimism. If in his films he shows that the world is really not that grim, it is a similar hope that he brings to his newer projects.

Curtis, who co-founded the British Charity Comic Relief, and has been instrumental behind the Live 8 concerts and Red Nose Day fundraisers globally, now works with the United Nations’ Global Goals for Sustainable Development. His not-for-profit communications and creative agency, Project Everyone, works with the UN to raise awareness about the Global Goals across the world. In September 2015, 193 world leaders agreed to 17 Global Goals for sustainable development. The grandiose hope is that if these Goals are completed, it would mean an end to extreme poverty, inequality and climate change by 2030.

In an exclusive conversation post Global Goalkeepers 2017 in New York, Curtis speaks about why he’s moved away from filmmaking and why he still believes there is tremendous goodness and love in the world.

You announced that you would not direct after your last film, About Time (2013), and have since worked with The Global Goals. Tell us about this decision?

Well, actually, something very specific did happen to me. I, almost by mistake, ended up going with a friend to Ethiopia during the famine in Ethiopia and Sudan in 1984-85. I saw terrible things there. You’d arrive in places and there’d be three huts and in one hut, everyone was going to die, and in one, they might survive and in one, they probably would survive. So when I returned, I thought, ‘Well, I must use all the power that I’ve got to be able to help in that situation.’

I hadn’t written Four Weddings at that point. I was just a sort of situation-comedy writer. But I knew a lot of people who were very famous comedians, and I realised we could go to the BBC. And in our first fundraising effort on the BBC for Red Nose Day, which we hope to bring to India soon, we raised 15 million pounds, which is more money than I’ll ever make in my life. And so I thought, ‘Do I do it again?’ And I thought, ‘Well I sort of have to, it’s illogical not to do it again!’ And then, the next year, we made 27 million pounds.

And then it’s just a process of realising once you start doing things that are meant to help other people, how much more beneficial they are to the world than just working for yourself. My big philosophy is that when you open the door to ask people to do good things, people pour in.

Has it been easy to move away from films?

In a way, I’m trying to retire. So I’ve got one more film to write. And I have written another film this year. But The Global Goals work is harder to give up than the other work. Because I feel like I’ve made about 13 films and if I make a 14th, no one’s really going to notice. I had a terrible moment once when I was taking a year off and I said to Bono, ‘I’m going to take a year off to do work for the Millennium Goals,’ and he said, ‘What, only a year?’ And I said ‘Oh, come on!’ (laughs) But, I’ve taken, you know, ten. In fact, 30.

What I really want to do is just sit around reading books and travelling around India.

We live in a world where President Donald Trump doesn’t even believe in climate change, which is one of The Global Goals. How can we achieve the Global Goals in such a scenario?

I think politics will change, you know. Macron’s election, which, given that he represents neither of the major French parties, in a way, is an interesting sign. And I would certainly see The Global Goals as the birth of a new kind of global politics and global understanding and belonging for young people. I feel they are intended for young people to make them feel more empowered and less alone, as it were. The way I think about the goals, and this is not a very good image, but you know the famous story about the tortoise and the hare. The hare gets all the advertising and the publicity, but it’s the tortoise beating malaria, extreme poverty, girls getting into school and keeps just slowly moving along.

How important is India in The Global Goals efforts?

I was just at the UN, and they were saying that without India, we won’t achieve the goals. So India is, obviously, hugely important. And I feel as though the signs are all in the right direction. I’ve heard only good things about the Global Citizen Concert, and about all the progress on the digital front. And whenever I bump into people from India, particularly from the education area, I find enormous enthusiasm there.

Art, when made with the intent of social responsibility, has brought about change. Did you wonder if you could make a bigger impact through socially-driven movies, given their global appeal?

Well, you know, our motto—the thing we’ve got above our door at Portobello Studios—is, ‘To make things happen, you have to make things’ and I’m a great believer in that. What I have also found is that it’s harder for someone like me to make movies for the cinema about serious issues. I feel as though I have no practice there. So I have made two serious (TV) films, I’ve made this film called The Girl in the Café (2005), which was about the G8 Summit, and Mary and Martha (2013), which was about malaria. I’ve tried to apply myself and I hope, you know, changed some people’s hearts and minds. But I think, you know, that on its own, it won’t do. And so what I try to do is give through my filmmaking a kind of marketing perspective to these platforms for change. I’m very aware, as a filmmaker, how crucial trailers are. So I suppose I’ve become a trailer maker, and a poster maker, rather than a filmmaker .

Would you endorse socially-driven movies? It’s happening here with films like Toilet-Ek Prem Katha and Pink.

Look, I’m really, really in favour of that, you know. My best friend is a man called Paul Greengrass and he’s made Captain Phillips, United 93, The Murder of Stephen Lawrence, which are all very important films. When I was looking into Aamir Khan, who I spoke to a lot during 2015, I watched some of his films and saw that happen there. I mean, I thought Lagaan was one of the greatest movies I’ve ever seen; right up there with Chariots of Fire as the greatest sports movie. And of course, he does that amazing TV show as well. I do think there’s room for all sorts of other films too.

I think one of the things that would be really interesting, and we really should work on is, if you do make films with social purpose, trying to use them as educational tools. There’s a great organisation called Britdoc in the UK, and what it does is, for example, there was a documentary about sexual abuse in the army, and it made sure that everyone in the Pentagon saw that, and that every new soldier in America has to watch that film. So I think it would be very interesting that with these new films in India, to actually use them as tools, particularly in schools.

As a storyteller what kind of stories should be told in today’s world?

Well, you know, at Goalkeepers 2017, it was really interesting how, up on stage, were some famous people. Priyanka Chopra, for one. And Will.i.am. And Naomi Campbell. But the thing that people most remember was the girl from Columbia, Laura Ulloa Gonzalez [once abducted by guerrillas and is now helping them reintegrate into society] and you know, Ria Sharma [who is helping acid attack survivors]. I think there are a bunch of young people doing very inspiring things, and I would love to find a way to tell those stories because I would love to suggest to people that, if we look out, we would find there’s a very heroic young generation today. And just like people made endless movies about war, well, at the moment, there’s a battle going on for justice, and for the planet, and it would be great to find a way to tell those stories.

There was a time when Love Actually was the most important British export. Today, that export is Black Mirror, and that says something. How can we make love relevant again?

I’m afraid it just is up to individual filmmakers to find the confidence in the way. I really loved The Big Sick. I thought that was just such a great film. And you know, when people say that there aren’t great romantic films being made any longer, you know, there are. I’m very obsessed by a movie called Like Crazy, which is such a beautiful film, and 500 Days of Summer. My theory of what happened to romantic films is that when it becomes a genre, it messes things up. Because then people think, ‘Oh! I know the formula’. So actually I’m hoping that in the next five years, people who are really interested in love, through their own experience, make romantic films. I mean, I didn’t know that Four Weddings was a romantic comedy, I thought it was an autobiographical film with some love in it. And I think that that is what will happen again. That’s just the rhythm of it.

And as for making love relevant again, I think love has huge power. It’s very interesting to me that Jerome Jarre, on his effort to raise money and feed people in Somaliland, called his fundraising efforts the Love Army. And it’s very interesting to me that Josie Naughton, who set up Help Refugees has a motto that says ‘Choose Love’. So I think people know that that’s the fundamental push to life, your love for your family and for people, and that will always be there… it will never go away.