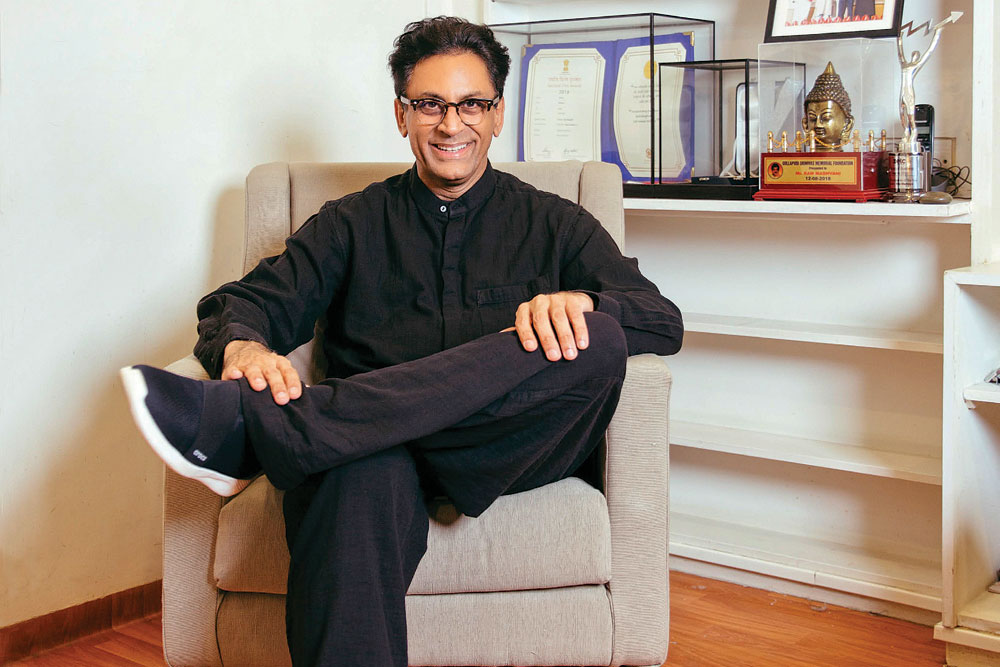 A fantasy film with Amitabh Bachchan didn’t take off. A proposed “woman-centric” movie with Kajol fell through. A movie with Aamir Khan playing Commodore KM Nanavati who infamously shot his wife’s lover in 1959 didn’t happen be­cause Akshay Kumar’s Rustom (2016) beat them to the draw. Ram Mad­hvani is used to failure. He is also a patient man, undeterred by the twists and turns of fate. He directed his first film, the experimental Let’s Talk in 2002. His next film came 14 years later, in 2016, Neerja, based on the life of Neerja Bhanot, model, and air stewardess, who died fighting the hijackers of Pan Am Flight 73 in 1986. His most recent film, Dham­aka, which takes a long, cold hard look at the media of today, has come this year, after a gap of five years. “I have 22 finished scripts ready to shoot,” says Madhvani, even as he savours his journey so far.

Dhamaka, running on Netflix, has become a conversation starter as it examines the moral corruption around us. Labourers who get starvation wages as they build the bridges, flyovers, and skyscrapers that make the city. TV anchors who promise truth and deliver TRPs. Politicians who turn every adversity into an opportunity. But the real enemy here is the TV anchor—that studio star who sits in front of a green screen, casually hash-tagging people, telling their version of the truth, choosing what to speak up on and what to make invisible. It’s a job at the end of the day. And as the TV execu­tive, played with ruthless charm by Amruta Subhash, says, “An actor needs an audience, an audience needs a drama, therefore an anchor needs drama.” Unfortunately, the viewer be­comes a victim, believing the anchor, idolising him, and most importantly thinking that what he is saying is the gold standard.

Based on the 2013 South Korean film The Terror Live, recommended to Madhvani by his lead actor Kartik Aaryan, it exposes the cruel hierar­chies of urban life, something the migrant had thought he would leave behind in the village; the ease with which people get slandered; and the poisonous politicians who divide and destroy. Written and made during the pandemic, you could call it India’s first post-pandemic movie with its themes disturbingly famil­iar, with a haunting Brihadaranyaka Upanishad invocation at the end, Asato ma sadgamaya, tamso ma jyotirgmaya, mrityo ma amrita gamaya (From ignorance, lead me to truth; from darkness, lead me to light; from death, lead me to immortality) “Our moral compass has become so skewed right now, I am always concerned about the value system we are putting out in society. This film is so much about the price of ambition and the compromises with ourselves we are prepared to make for that. The lead is a fallen hero but you feel bad for him,” says Madhvani.

The last 18 months have been par­ticularly busy for him. He completed the post-production of his first web series Aarya, adapted from the Dutch series Penoza. He planned his third film Dhamaka on Zoom calls, shot it in a bio-bubble, and completed the post-production on it, also on Zoom. And he shot the second season of Aarya, again in a bio-bubble, which is now in post-production. With an Inter­national Emmy nomination in the bag for the first season of Aarya, he is now ready for a detox holiday.

The filmmaker who runs Equinox Films, an ad film production house, has waited a long time to be able to plan a vacation. He won’t tell you how old he is, but he will admit to wanting to be a film director since the age of 16. Perhaps even before. He grew up in Barshi in Solapur, Maharashtra, which had precisely four theatres. For some reason, they were named after the four Mangeshkar sisters, Lata, Usha, Asha and Meena. “My earliest memo­ries were of sitting in a chair near the projectionist because the halls were usually full and I got in because my family knew the owner,” he says. So there he would be, sitting on a chair, sip­ping his Mangola, watching Yaadon ki Baarat (1973), once, twice, thrice…eight times. “I felt really safe in the theatre. It was like a womb for me in my growing up years,” he says, adding, “Cinema is where you forget yourself, but you also remember yourself.”

Going to boarding school at St Peter’s School, Panchgani, only deepened his love for cinema. The steel boxes would arrive, they would untie the rope, and gather excitedly every Saturday to check which movie was being screened. To this date, there is nothing as intoxicating for him as the smell of burning film as the projectionist rolls the film.


“This film is so much about the price of ambition and the compromises with ourselves we are prepared to make for that. The lead is a fallen hero but you feel bad for him,” says Ram Madhvani, filmmaker

He was addicted for life. Almost everything was in pursuit of his eventual destination. He went to New York to learn the diamond trade with his elder brother who financed his evening course in film at the New York School of Continuing Education. Back in India, he would go to Alliance Francaise and watch the movies of all the French masters. He joined Max Mueller Bhavan to watch Rainer Werner Fassbinder and Werner Herzog. He would even go to the Akashvani auditorium, once a south Mumbai landmark, and catch up on movies by the Indian greats, from Satyajit Ray to Ritwik Ghatak, Mrinal Sen to Shyam Benegal. That was his film school, his cinematic education, his enduring love. He joined film director Sumantra Ghosal as a trainee at Equinox, two years later, he was a partner. It was where he met his future wife, Amita, and where he learned everything about telling a story.

It is what sustained him through his darkest moments and his bleakest hours. He would win many honours with his ad films—including the iconic Happydent chewing gum commercial and Airtel’s Har Ek Friend Zaroori Hota Hai campaign—but cinema always elud­ed him. He didn’t give up, soldiering on, expanding his imagination, and refining his techniques. He would give himself permission to cry for a specific period of time and then move on to the next thing when something didn’t work out.

Along the way, he developed his own style of filmmaking, borrow­ing heavily from English director Mike Leigh whose Secrets & Lies he saw in Sydney in 1996. “I remember walking out of the cinema hall in a daze and I kept walking.” He now shoots his mov­ies in what he calls the 360-degrees style, where he tries to capture life before action and cut, where the camera fol­lows the actor and doesn’t get locked in the industrial process of filmmaking. So in Dhamaka, though the TV studio, a set made on the grounds of Renaissance Hotel, Powai, didn’t broadcast, it did all else. The coffee machines made coffee, the intercoms worked, as did the TV screens. Ditto in Neerja, where the aircraft was built to scale in Borivali. The bathrooms functioned, the air condi­tioners worked and an actual kitchen was installed. In Aarya, every actor was encouraged to bring something personal to the set, so they could feel at home.

He uses long takes, sometimes stretching into 10 pages of writing, so he calls his scenes “chapters”. He also believes in the discipline of milestones, in working with actors in an “informally formal” way. “You know your script and lines but how you get to your milestones is up to you. It’s like a jugalbandi of a raga, like jazz. You know the notes but you work around it. And then I like to throw googlies to keep my actors on their toes.”Like in Neerja, he told Sonam Ka­poor to learn four Rajesh Khanna songs but didn’t tell her when he would ask her to sing them; it would be when the hijacker had a gun to her head. “Along with the script there are googlies written on every page. We try and get the truth cinéma vérité style,” says Madhvani. Or as Aamir Khan once described it to Sonam Kapoor—as commercial cinema shot in an experimental way.

Filmmaking can be a solitary busi­ness but Madhvani is a great collabora­tor, says Sikander Kher, who plays the conflicted hitman Daulat in Aarya. He does extensive workshops with acting coaches, usually uses five-ten cameras, never calls action or cut, allowing actors to create their interiority. He is in the ser­vice of the actor, adds Kartik Aaryan, so you can be in the service of the character.

Madhvani is working on a web series on the Jallianwala Bagh, which looks at the role of the Hunter Commission. He has a shelf full of books on the event, well thumbed, with stick-ons. “I know Shoojit Sircar has made Sardar Udham, but I want to look at the massacre in its entirety,” he says. Typical of a man who takes no short-cuts.