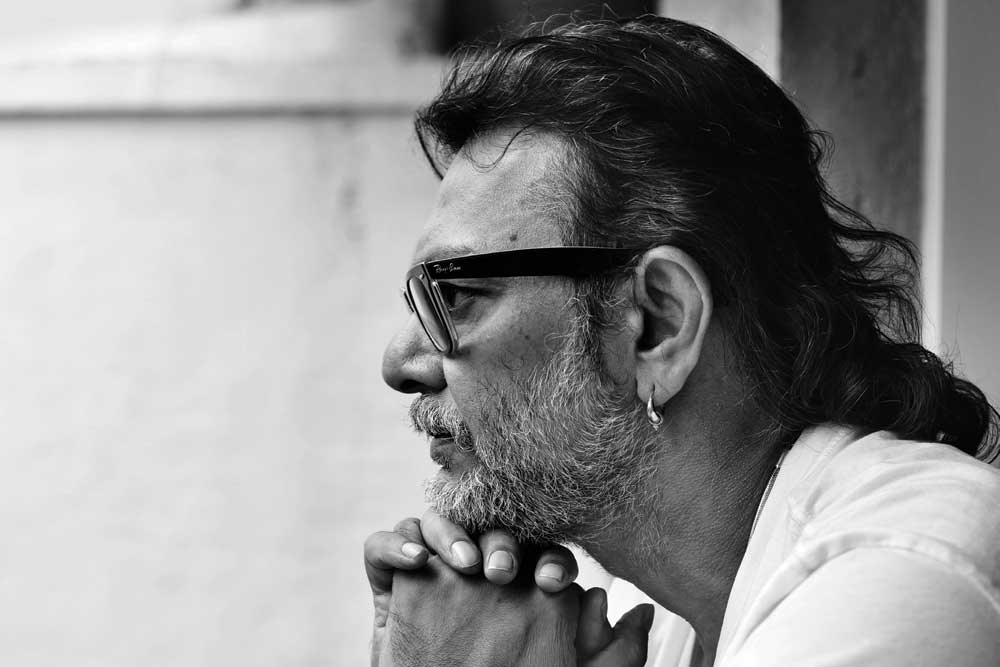 When you walk into filmmaker Rakeysh Omprakash Mehra’s Bandra office, you get a sense of nostalgia. Not of having been here before, but of having experienced stories that were born in this space. The high ceiling, the smell of varnish, a traditional wooden rooftop above, a massive film library on one side and a writer’s table on the other, and an easy couch in the middle of the room where Mehra sits discreetly. He’s scribbling something on a piece of paper. He greets you, and notices you’ve pulled out a book from his collection. It’s the shooting script of Michel Gondry’s Eternal Sunshine of the Spotless Mind. “That’s a good book,” he says with a soft smile.

Here is one of the most important filmmakers of our generation—in his own space. He comes across as a man as calm and collected as the middle-ager next door, as a man of reflection. “It was exactly an afternoon like this,” he says, “I was pondering over a play I had seen in college some 30 years back. I texted Gulzar saab and said ‘Chai?’ He said, ‘Aa jao.’ We are next-door neighbours, so I went to his home and asked him the question that had bothered me ever since I saw the play: ‘Sahiban ne teer kyun todi thhi’ (why did Sahiban break the arrow)?”

An amateur college play that Mehra had watched as a 22-year-old had left a lasting impression on him. The story was that of the undying and doomed love of the folk lovers Mirza and Sahiba. Years later, that question has come to give us Mirzya, Mehra’s latest film. “When Gulzar saab (who has written the script for Mirzya) said, ‘Chalo, tumhaare sawaal ka jawaab Sahiban se hee poochh lenge’ (Let’s find Sahiban and ask her the answer to your question),” I felt like I was on the right path,” he says.

Not all of Mehra’s films are answers to questions he has had, but he confesses this one is. Clichéd as it sounds, he says this film is his quest for the meaning of love. “I had stopped experiencing love. Everything was too pat and dry. You can’t look for an emotion within a novella or a film, you actually have to go through that journey. As a filmmaker, one often fulfils oneself in the stories we tell. That’s what I have done with Mirzya. Filled a vacuum, reinvented myself.”

Mehra has made four feature films in the last 16 years and this is the first time romance takes centre stage. From the psychological thriller Aks (2001) to the political drama Rang De Basanti (2006) to the social satire Delhi-6 (2009) and his last film Bhaag Milkha Bhaag (2013), which was a biopic, love stories have always lurked within his films but have never been the spine of the story.

Mehra says he was a hopelessly romantic young boy at Delhi’s Shri Ram College of Commerce. He’d often jump the walls to the ladies’ hostel to recite poetry to a girl he had fallen for. It’s a side of his personality few know about. The courtship would be ridden with shayari and sangeet (poetry and music) and they’d sit in groups confessing their love to one another. “In the midst of so much happening around me, I had left that expression behind. Call it age, call it experience, something distanced me from the person I was, and I wanted to find that expression again,” he says.

Every time Mehra has made a movie, he has had a personal reason to do so. It’s the way he has always preferred to tell his stories. Even as a child in a classroom of just four students, he’d be the one making up the most dramatic stories. “We’d play this game where we’d sit in a circle, somebody starts this story and the other person has to build it. I always found it very fascinating but forgot about it as soon as life took over,” he says. He came from a middle-class family of five living in a single room in Delhi. They did not have TV till he was 22, but they had a radio set, which taught him music.

“My first job was that of a door-to- door vacuum cleaner salesman, where I’d wear a tie, take a bus and try my luck every day. You’d have to be a fool to do it,” he says, “But somewhere I knew there was an unfulfilled desire within me. I somehow landed up in Mumbai and ended up directing a commercial that was meant to be done by Prahlad Kakkar. That’s the day I realised you don’t need to go to film school to make films.”

He confesses he was not politically motivated as a youngster, but always wanted to make a difference. “I would break down when I saw injustice. I was angry and helpless at the same time, and I wanted to do something.” Not many know this, but Mehra (who studied in an Air Force school) wanted to be a fighter pilot but was rejected. “I have never believed in rhetoric. If you want to do something, do something. Why are you making a morcha out of it? Trying to join the Air Force was my attempt to do something, but I was never cut out for it. Maybe it was that guilt that made me make Rang De Basanti (RDB),” he says.

It’s not just Mehra’s most provocative film, but is arguably amongst the best Indian films ever made. For him, it was a story crying to be told. As a young boy studying in The Air Force School in Delhi, Mehra remembers observing MiG fighter jets flying in and out of training camps. “I was among the few civilian kids in that school. All my friends’ fathers were fighter pilots with the Air Force and when the MiGs were crashing, I had to tell the story. I saw Bhagat Singh as a soldier more and less of a vigilante. He dropped the pen and picked up the gun and I thought that’s the person I should tell my story through.”

I did not know Rang De Basanti is going to be so impactful, but I’m happy it’s changed many mindsets

A film that shook the system as much as people of the country, Rang De Basanti combined action and opinion in a meaningful way and sparked a wave of patriotism among India’s young. Drawing parallels between Bhagat Singh’s rebellion against the British and today’s youth fighting against a corrupt system, RDB reflected the collective consciousness of citizens. “I remember it was around the time the Jessica Lal murder happened and there was a lot of anger among the youth of the country. The film asks us to be part of the system and fight it, and what the film says is relevant even today,” says Ankit Lal, writer and infotech head of the Aam Aadmi Party, who recently wrote a column on how the film changed his life.

Overnight, Mehra was headlining debates on the changing political future of the nation. He was seen as one who had the power to foster if not implement social justice. “There is a poem by Sahir Ludhianvi which says ‘Bahut dinon se mashfala siyasat ka, jab jawan ho bachche toh qatal ho jaye. (For too long has the power system worked in a way that children grow up only to be killed).’ Rang De Basanti didn’t come out of an opinion. It came from a point of view— how can one human being exploit another? I did not know the film is going to be so impactful, but I’m happy it has changed many mindsets or at least provoked change.”

Mehra followed it up with Delhi-6 and though the film wasn’t half as impactful as RDB, it ruffled some feathers too. “Delhi-6 questioned religion and this monkey business of making a masjid, breaking a mandir and vice-versa. I remember somebody burnt the film prints in Pitampura in Delhi and there was a case too. In Khan Market, somebody threatened to kill me, and then I thought that means my film is cool.” He believes it’s tougher to make a film like RDB today. “It’s because the socio-political scenario has changed too drastically. Our previous Government took us to the cleaners, they sold everything. I don’t know where I would begin. Today our jawans are dying at the border, and I’m not sure how to tell that story because a film is never going to be enough,” he says.

As long as we make our movies from a real space, I believe we should continue doing it

Mehra’s movies may not have been technically perfect and might have had narrative loopholes, but he always made his movies without the fear of judgment. He created a world within his cinema that reflected a vision and that was larger than life. As a director, he is known to set a foundation and let his crew play without restrictions. “Cinematically, telling a story is very fulfilling. When you are directing, it’s more like you are a conductor and you have written the symphony also. You need to have your actors play their own parts, perform to their own excellence, play off each other. But at the end, it’s one film, one character, and the film should have a lyrical quality to it,” says Mehra.

UNLIKE MANY OF his current contemporaries, he doesn’t judge the worth of cinema based only on what his colleagues in Bollywood make. The business of storytelling, he believes, is a universal pursuit that is bigger than what most of us imagine. “I don’t think cinema belongs to India. I think cinema belongs to the world. And there is enough work happening all over the world. Look at Iranian cinema, South Korean cinema, the musicals, animation, futuristic films, sci-fi films, there’s work happening in every genre. In your heart, you have to check if you are on this earth or you are in India or Bombay or Bollywood. You can’t shrink your life to that place you come from or make it about being a ‘hit’ filmmaker.”

From selling vacuum cleaners to making a film that became a cult to retracing the romance lost on our times, Mehra has come a long way. He fondly recalls a documentary he made a few years ago to celebrate 100 years of Indian cinema. Called Bollywood: The Greatest Love Story Ever Told, it was screened at Cannes in 2011. “I picked up the camera and I went to one of the cabs outside VT station and asked the driver to take me to Bollywood. Everyone refused. Then this one guy agreed and dropped me outside Amitabh Bachchan’s bungalow and said, ‘This is Bollywood’. Everyone at Cannes was fascinated by what we do, and we in turn are fascinated by them. We are all in it together. As long as we make our movies from a real space, I believe we should continue doing it.”