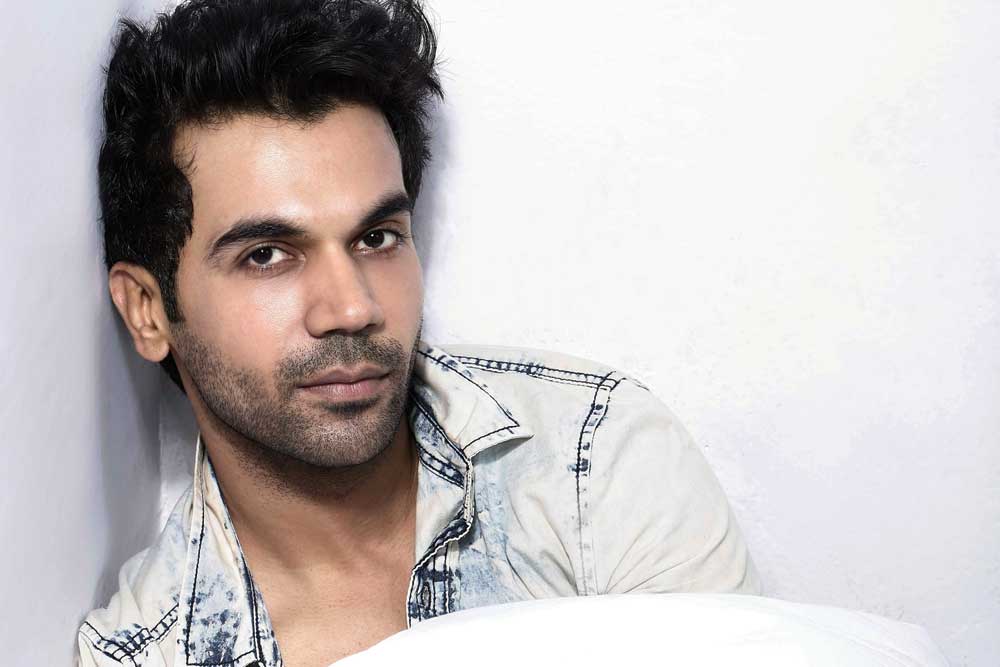 FEW PEOPLE HAVE seen Rajkummar Rao’s six-and-a-half- minute long acting showreel from his FTII (Film and Television Institute of India) days. It’s available online and he seems a bit embarrassed about it, but if you watch closely, you can spot the making of a seriously good actor. “I got too serious too soon in life,” he now says, looking back at the time when he decided acting is all he wanted to do.

Rushing for the airport after a hectic round of interviews for his latest film Behen Hogi Teri, Rao asks if we can chat in his car. En route, he stops at home to pick up an extra pair of shoes and a jacket, almost at the cost of missing his flight. “Actually, what I’m wearing are branded clothes for promotions. I’d rather travel in my own clothes,” he says. It is peak traffic time in Mumbai and there’s less than an hour for check-in to close. He suggests a different route. The driver is not pleased, but agrees. “Okay, let’s chat,” Rao says, finally, settling into his comfortable car.

Despite the frenzy and rush, his face glows. It is clear that he is enjoying the demands of his life. “I’m a workaholic,” he proudly confesses. At 32, he’s seven- years-and-20-films old in the industry and seems like he’s just starting off. “I asked to be an actor. Ever since I was in Class VIII, that’s all I asked for. All the things that come with it are just extra. And I’m very grateful for it,” says Rao, who is the only actor of his kind in Hindi cinema today. He could be your brother’s shy best friend, the neighbour who is mostly jobless, that dashing college professor, a lover boy who is too romantic to be taken seriously, a recluse who is on the brink of a breakthrough—the possibilities are endless.

He doesn’t look the like the conventional Hindi film hero and neither does he behave like one. He isn’t larger than life, and he doesn’t wish to be either. He isn’t like the Ranbir Kapoors and Ranveer Singhs of his generation, and neither is he a Nawazuddin Siddiqui or an Irrfan Khan. Within a few years Rao has made a name for himself as an actor who isn’t only dependable, but who can also surprise the hell out of you every time he’s on screen. With his debut, LSD: Love, Sex Aur Dhokha (2010), he stood out in a film that broke many cinematic boundaries.

“It may seem like there’s too much on my plate too soon, but I’ve been thinking about my life as an actor ever since I can remember. There isn’t any one moment of realisation, but as a kid growing up in Gurgaon, this is all I wanted to do,” he says. His father, a government servant, and his homemaker mother were happy to support him, as long as he was doing what he loved. “I grew up in a joint family with uncles, aunts, cousins, all under one roof. But I’d always be out either performing a dance show on stage, or training in martial arts, or rehearsing a play. From the very beginning, I was curious to get out there and explore the world, there was this constant itch in me, which I don’t think will ever die,” says Rao.

When he was young, he often watched his mother struggle to meet everyday expenses. He was determined to provide for his family, so that they could have a better life. Today he even provides for the education of his nieces.

Growing up, he spent weekends with his family back home watching Amitabh Bachchan and Salman Khan films. “I was very star struck because I always believed that actors were a different species altogether. They were never part of our world, but a different universe. I wanted to be there,” he says.

Growing up, I believed that actors were a different species altogether. They were never part of our world, but a different universe. I wanted to be there

Rao’s choice of films comes from FTII (which he calls the most memorable two years of his life) and not just his early craze for cinema. “I used to do a lot of theatre at Shri Ram Centre and that’s when I heard of FTII. When I applied and got a call back, it was the first biggest moment of my life. In that space, we were breathing cinema 24/7. It’s where I got to know of the works of those like Robert De Niro, Philip Seymour Hoffman, Al Pacino and so many others. I started reading books on the lives of actors like Daniel Day-Lewis and realised that acting is so much more than what I grew up watching. Even today I am in awe of the performances I witnessed in the cinema we were introduced to at FTII. Somewhere during FTII, the process became very meditative and spiritual for me,” says Rao.

The institute became his home, and those around became his new family. The processes he was taught at the institute did not just hone his instincts, but taught him the meaning behind method acting, which was the mantra for all of the performers he looked up to. He’d walk around famished and barefoot for days together to play the part of a homeless man or even lock himself up in a dark room to experience what a mentally unstable person might feel. “I did over 50 short films in that time, breaking so many of my own perceptions and limitations about acting,” he says.

His first year in Mumbai after graduating from the institute wasn’t easy. He was one among the many talented acting students who passed out every year and move to the city in the hope of work. “I knew I would have batchmates and others from the institute to guide me, but one couldn’t expect that to materialise into work. What was good was that institute life had made me very confident. I wasn’t one to lose hope. Then in 2010, I saw an ad in the paper which said Dibakar Banerjee was looking for newcomers for a new film that was going to be shot on digital cameras. I immediately applied,” he says. He remembers turning up for the audition of Love, Sex and Dhokha in a tight T-shirt and jeans and being asked if he had any ‘normal’ clothes. “When I got a call about being selected for that film, it was the second biggest moment of my life,” he says.

I knew Shahid was the role of a lifetime for me. It bothers me when we don’t stand up for what’s right or if I don’t help when I am in a position to do so

What followed was a series of good films with strong plotlines, including Ragini MMS (2011), Shaitan (2011) and Gangs of Wasseypur (2012). Within less than two years of his debut, Rao had played the title role of advocate and human rights activist Shahid Azmi in Hansal Mehta’s Shahid, which went on to win the National Film Award for best actor and best direction. To play the role of a lawyer who fought for innocent Muslims required a leap of confidence. He says, “I knew it was the role of a lifetime for me. Personally, it bothers me when we as a community don’t stand up for what’s right or if I don’t help when I am in a position to do so. The story of Shahid was immensely inspiring, and I knew that it would challenge me to my core as an actor.” Using his natural vulnerabilities and honesty, Rao portrayed the character very well.

For Rao it was never the length of the role or the visibility he got as an actor. Without a second thought, he chose stories that moved him and which he could do justice to. The roles he has essayed masterfully include a freedom fighter in Chittagong (2012), the cop in Talaash (2012), the hopeless boyfriend in Queen (2013) and the helpless husband in City Lights (2014). He stood his ground, even with celebrated performers like Aamir Khan and Manoj Bajpayee, who he’d watched as a child. “For me, watching Manoj Bajpayee in Satya was one of my most memorable moments growing up. When I got to perform with him in Aligarh (2015), it was a big opportunity. But the minute the camera is on, we all become the characters we promised to play. So it’s not about being intimidated, but about how much you can lend yourself to the moment,” he says.

His toughest part to date is the one he played in Vikramaditya Motwane’s Trapped (2017). This was the story of any young boy in the big city desperate for a home of his own, but being trapped in your own dream was what Rao had to achieve. He played the role off a 35-page script that was entirely improvised to give the audience a credible view of the ticking mind of a man stuck inside a flat without food or water for days. The film works entirely on the might of this one actor, whose progression from desperation to insanity to finding his answers and meeting life on its own terms is hauntingly portrayed.

Few actors of Rao’s age have the prowess to pull off an entire story minus a supporting cast, purely on the strength of performance. He could easily impart a few tips to many of his contemporaries who are part of bigger films that aim to be just blockbusters. There is a little bit of himself that bleeds into each of his characters, and he acknowledges this.

“People tell me this is just the beginning. I am now shooting for a web series named Bose where I play Subhas Chandra Bose. I’ve gone half bald, I’m learning Bengali, listening to Rabindra Sangeet and doing a lot of things I never would have otherwise. It excites to delve into the life of another person, and see how I interpret it. I couldn’t have asked for more,” says Rao.

He’s now got important films like Amit Masurkar’s Newton based on elections in a conflict ridden jungle, and Hansal Mehta’s Omerta (where he plays a British terrorist of Pakistani origin responsible for the kidnapping of journalist Daniel Pearl) up for release.

Rao has not let success go to his head either. “Even today, when mum calls, she asks if I’ve eaten and slept well. And even today I am the same person as I was. I may travel in a fancy car, but if I know someone is waiting for me, I will get off the car and run from one signal to another to make it to my meeting. There’s no time to waste and I definitely don’t want to be responsible for wasting it. People say this is just the beginning for me. I hope it always remains so.”