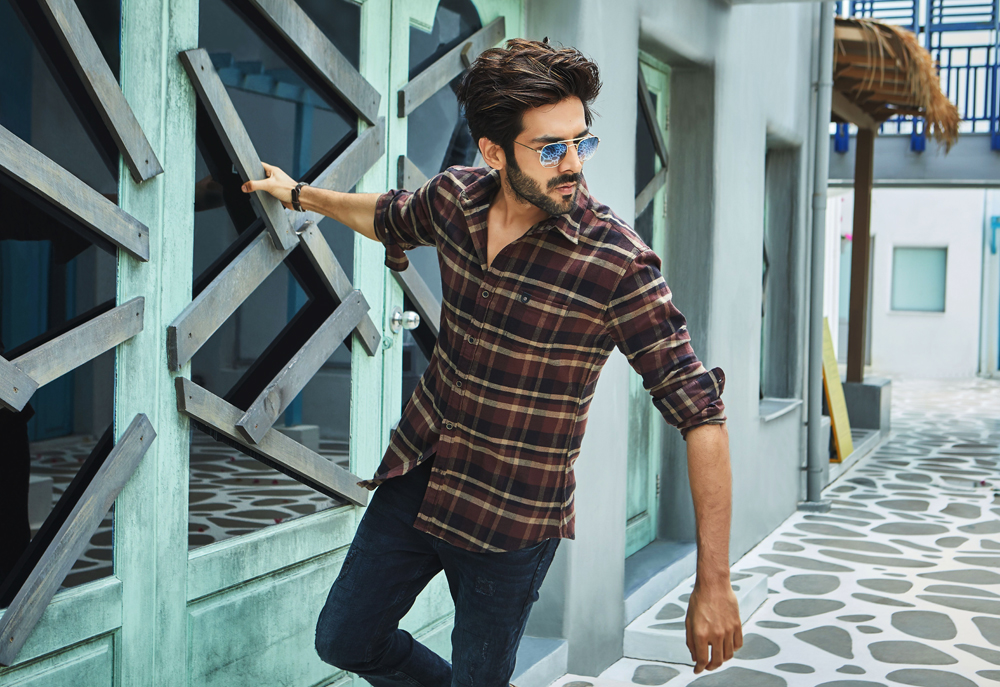 
Kartik Aaryan claims he has been closely following the coronavirus well before the outbreak became official in India. The actor says he was shooting the Bhool Bhulaiyaa sequel in Lucknow last month with Kiara Advani and Tabu, when it began to look like things were going to get especially bad in India. He says he was so glued to coronavirus news that he was regularly updating the team; at one point, he says, his co-stars began to joke his updates sounded like doomsday prophecies.

When it became clear the unit had to press the pause button roughly five days into a 14-day schedule and return to Mumbai immediately, there was uncertainty and some panic. In the weeks since he has returned, the actor says he’s been helping with chores at home and is trying to make the most of his time with family. For the first time in nearly seven years, he says, he was able to celebrate his sister’s birthday with her; the family got a recipe to bake a ‘biscuit cake’ from her friends via Skype and took a shot at making it on her big day.

He’s also catching up on films on Netflix, “especially thrillers”. His curiosity about the pandemic led him to Steven Soderbergh’s eerily prophetic film Contagion (2011)—not once, but twice in two days. He also decided to check out Soderbergh’s other medical thriller Side Effects (2013). Because of his biotech background, he says, he has had an unsatiable interest in diseases. But he doesn’t want to become “obsessed”. He believes this experience will change us in a fundamental way and suspects we will come out more sensitive and empathetic. That’s some profound prophecy right there!

There may be no clarity yet about when it will be business as usual, but at least one cinema chain appears to be gearing up to resume operations—if only in limited measure. PVR Cinemas, the largest multiplex chain in India, is reportedly making preparations to welcome patrons from June in what they’re describing internally as a ‘social distancing-compliant model’.

A senior executive from the chain has sent out a memo to partners saying the company is working towards resuming screenings but with an entirely new, never-before-tried plan. If they do eventually pull it off, PVR will sell tickets for only a sixth of its screen capacity for every show. The plan is to seat patrons at least six seats apart from each other in this experimental phase. New seating charts are being drawn up.

There is no word yet on what they plan to screen in this phase, given that it seems unlikely that producers will risk putting their new releases into cinemas in such uncertain times. Trade insiders say it’s a bad idea and won’t work even (especially) if PVR intends to screen older releases.

A popular actress has found a way to keep herself occupied during lockdown. She’s been scouring through social media, especially Instagram, to see what other Bollywood folks are up to and each time she comes across a video of an out-of-shape star wife working out in too-tight fitness gear or a has-been actress sharing baking tips, she shares it in her circle for a laugh.

The actress has a knack for spotting those who look especially uncomfortable in their workout videos, identifying ‘actors’ whose talents are limited to how many pull-ups they can manage or singling out for ridicule those who seem to lack the basic sensitivity to not share pictures of elaborate home-cooked meals when so many across the country are starving. Her sarcasm and emojis that accompany these photos and videos on her WhatsApp group are hilarious, a group member reveals.

None of them seem to notice the irony that they’re not any different from the folks they’re laughing at. Ensconced in their own bubble as the real world struggles.