Adoor Gopalakrishnan’s new film, illuminated by an intimate absence, strikes a fine balance between the existential and the sociological 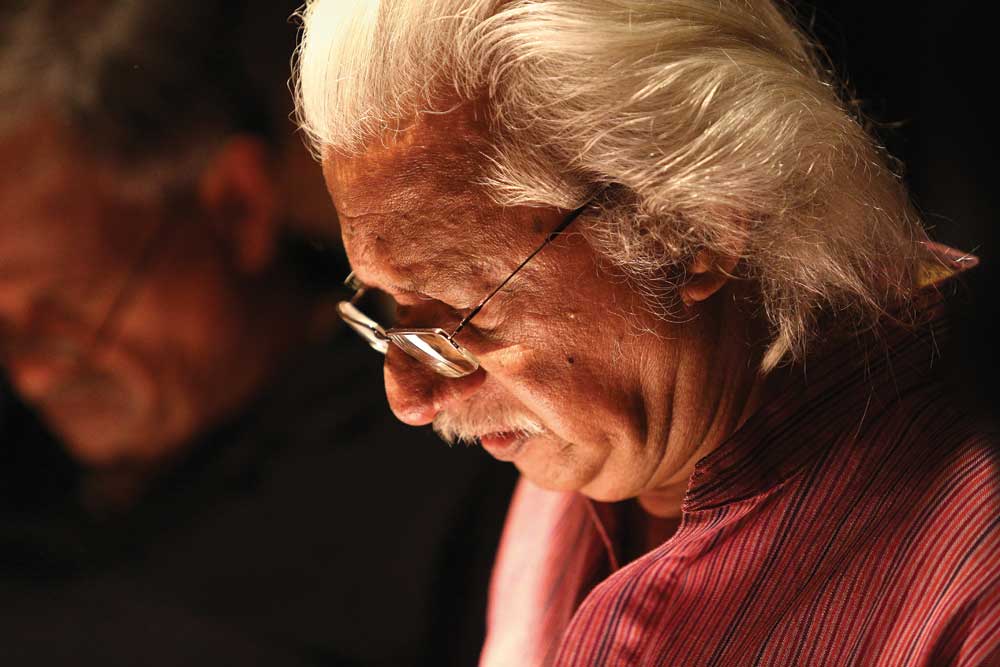 BEFORE I SEE the film, I see him on my mind’s screen. A lone man in the house on a hill, and the rustle of leaves in the afternoon as familiar as stranded whispers from one of his frames. The house, solitary and solid in the sun, draws its retro spirit from his ancestral memories— maybe it’s architecture as archetype. Inside, the sense of space is accentuated by silence, and he is not particularly inclined to disrupt the comfort it offers either—maybe memories are too sacred to be banalised by words. The silence is an expression of the void, and he is still overwhelmed by its intimacy. There are enough stories in his head to help him overcome the kind of loss that can make ordinary men invalids in the present. Maybe it is stories that add to the serenity he exudes. As in his art, what you see is an invitation to perceive the hidden, the nameless emotions that stir beneath the calm. Adoor Gopalakrishnan is in conversation with himself, and at 75, this exploration has become lonelier, even linear, but you can’t miss the intensity. I love to be an intruder.

Now I see his new film, his 12th, and in many ways, his most intimate work. It was an event in Kerala when it was released four months ago, and I wish all the headlines were for the right reasons. It was, in retrospect, an artistic variant of the Oedipus complex: the repudiation of the father figure was a necessary condition for attaining adulthood. So the film Pinneyum (Once Again) remained lost in misreadings, pettiness, and the anxieties of certain aspiring auteurs. All those casual judgments that reduced this film to a size that would fit into the narrowing mind of its debunkers only brought out, once again, the inherent cruelties of the troglodyte. In spite of the critical appreciation it continues to receive in international festivals, it lies orphaned and underappreciated at home. This is the kind of critical context Adoor can afford to ignore. It hurts nevertheless.

The story is so straight that it is capable of misdirecting the lazy critic to simplistic consolations. The film opens to an overpowering sense of normalcy in a middle-class home: unemployed husband and working wife, embodying the mundane culmination of a romance; the girl’s father, the respected village totem still lording over the house; and the family idiot with a heart of gold. Disenchantment swells beneath the idyll; stoic resignation to the real keeps the unknown away. And— how can you miss it if you are an Adoor watcher?—they are all inside the metaphorical ‘rat trap’, unaware. At last, the husband, Purushothaman Nair, attains freedom—and ambition—when he gets a job in a Gulf country, a familiar destination for the low-income Malayalee dreamer. On his first visit home on vacation, his aspiration— or greed?—pushes him to fake his own death to claim huge insurance money, with the father-in-law and his wife’s uncle as partners in crime.

It was a notorious crime story in Kerala, still unresolved, that triggered Adoor’s mind, but only the naïve would conclude that the film was about that faded headline. It visits the familiar Adoor territory in subtler, deceptive ways, and it is for you to be cautioned against its structural clarity: what lies beneath the beautiful is dangerous. The weary ordinariness of men, caring and loving and admirably responsible, can hardly camouflage the cold-bloodedness of purpose that drives them. In the house that Adoor builds for his irredeemably entrapped characters, the only male that empathises, and knows what it is like being trapped, is the in-house idiot; maybe purpose has not corrupted him. Everyone else is a wilful accomplice, and any punishment is bearable as long as the crime is worthy of family values. When they, all honourable men, kill their prey in a moving car, what’s frightening is not the crime itself but the righteous intensity of their purpose. Adoor is one filmmaker who achieves a rare balance between the existential and the sociological. In Pinneyum, it is a seamless passage.

The linear progression of the passage— we don’t even realise—is a steady process of degeneration. We are again in Adoor country, where decay is as much physical as it is emotional. The house in Pinneyum—there is always a house of spirits in Adoor country—holds within its walls men more fragile than the world they inhabit. Then, Adoor is the choreographer of the falling and the fallen, and of those who are in suspended animation. At times, he is a wicked choreographer, and I can imagine the glint of mischief in his eyes behind the camera as he adds a dash of the comic to the lost, tragic souls. The comical permeates the darkest mise-en-scènes in an Adoor film, and in Pinneyum, it only aggravates the doom in the shadows.

Amidst these stagnant lives caught between cheerless laughter and masked fear stands one woman, the anchor of Pinneyum. It has been said that the male frozen in time is Adoor’s favourite species. You won’t be able to believe that if you have been watching him lately. In Pinneyum, as lover, wife, mother, protector, witness and giver, she reigns over the frailties and fragilities of men. Don’t look here for the maudlin feminist testament of a self-conscious filmmaker; you are in the presence of a mind that absorbs the intimacies and absurdities of stranded lives with dry detachment. It is the master’s method of perfection, and it abhors sentimentalism. The woman in Pinneyum takes that perfection to one of the most beautiful realms in any Adoor film. In the end, when she closes the window on the undying past, it is not the repudiation of the phantom that rises from the dark to claim her; it is the preservation of dignity in a world where even the act of suffering is steeped in grotesqueries. Once again? No, not for her.

In an Adoor film, the relationship between man and nature is an unsettled argument, nevertheless one of the most beautiful ones you may come across in Indian cinema. It is a confluence of the sensuous and the visual, musical and operatic. In Nizhalkuthu ( Shadow Kill), the wind intervenes to tell the story when man fails. In Pinneyum, the rain is the most searing expression of the heaving mind. In set pieces of painted harmony, it is nature—its outpourings— that provides the voiceover as well the backdrop. It is in communion with the woman who resists ‘pinneyum’.

Taken together, his twelve feature films, rooted in the feudal ruins of middle Kerala, is a visual history of man hopelessly imprisoned by his own fears, told by one of Indian cinema’s last living greats. In his telling, frames carved from memory and everydayness, the emotional and the intellectual, the spiritual and the ideological, the natural and the fantastical, merge so effortlessly. It has been one of the longest journeys in the Indian new wave, without a false step. The fierceness of that commitment, and that pause-less patience, has made him a lone reaper. The unadorned realism of Pinneyum is illumined by an intimate memory, but Adoor does not close the window on it. Once again.