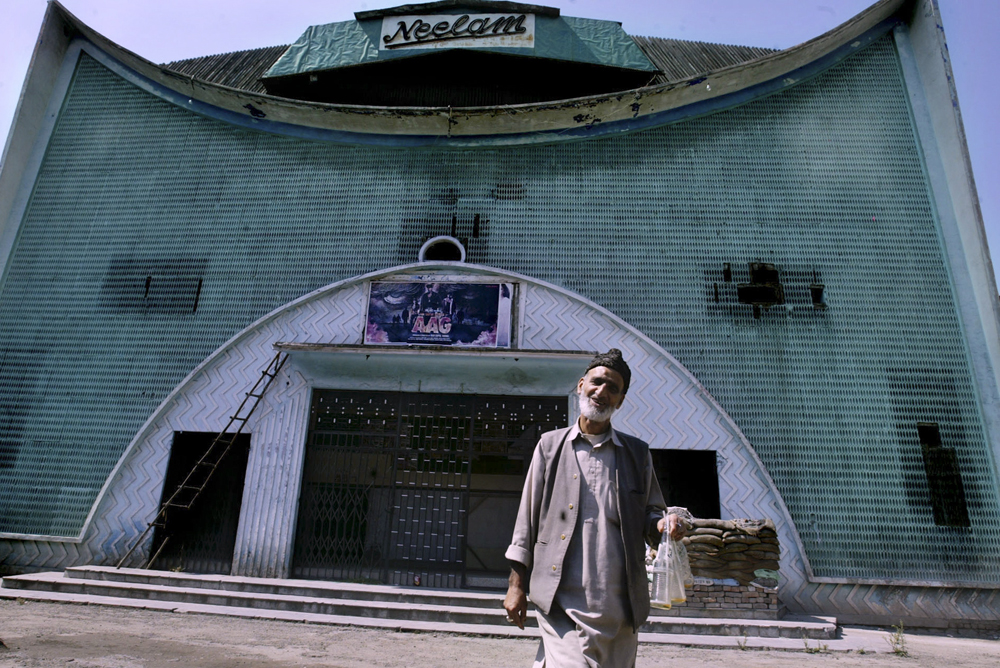 
The last film he showed at Broadway theatre in 1990 was JP Dutta’s Yateem (Orphan), starring Sunny Deol. And in many ways, from that moment onwards when a militant organisation Allah Tigers called for a ban on liquor shops and cinema halls, they were treated as orphans. Two years later, Palladium in Lal Chowk was burned down, and a year later Broadway too met with the same fate. The sound of guns and grenades drowned out any other noise, and soon all the cinema theatres in Srinagar were closed down. Kashmir Valley, once the favoured spot of filmmakers from Mumbai, became enveloped in the darkness of enforced terror and a fake Islamisation imposed by militants who consider music and dance to be against their faith.

Thirty years later, there is hope again, in some small measure, even as the political and constitutional way forward is still unclear. The government of Jammu and Kashmir has issued a multiplex licence to Taksal Hospitality, owners of Broadway theatre. By January next year, the five-storeyed building that would have come up on the spot where the original theatre stood will open with two screens, and a possible third one on its way. With new post-Covid hygiene protocols in place, it will offer to youngsters in Srinagar what they haven’t seen for at least two generations—movies on the big screen in their own hometown. “I want my child in Srinagar to get the same facilities as those in Jammu,” says Vijay Dhar, chairman of Taksal Hospitality, who as founder of the Srinagar chapter of Delhi Public School knows exactly how young Kashmiris feel. “My children are craving entertainment. I want them to see a different world from what they’re used to. Don’t forget 40 per cent of Kashmiris are under 35.”

Dhar has been here before. In 1999, after the Farooq Abdullah government offered incentives, he reopened a reconstructed Broadway. Neelam in Karan Nagar, Srinagar, which also ran English movies like Broadway was also reopened, as was Regal on Residency Road. But grenades exploded on the premises of Regal, killing one moviegoer and injuring 12, a day after, putting paid to any future attempts. Renu Tikoo, a Pune-based homemaker, remembers bunking classes in the early seventies at the Government College for Women on Residency Road to go to Regal to watch Rajesh Khanna films in particular. “I was a big fan. Aradhana and Kati Patang were the last films I saw there before I got married,” she says. She can still rattle off the names of most of the theatres in Srinagar: Palladium, which was taken over by security guards, Regal and Amrish on Residency Road, Shiraz and Khayam in Khanyar, and Neelam, which remained operational until 2005 when it became the spot for a battle between the police and militants. The theatre was screening Ketan Mehta’s Mangal Pandey: The Rising, starring Aamir Khan, at that point.

Safety of moviegoers remains a danger. As noted heritage conservationist Saleem Beg says, Srinagar has every right to be entertained, but the real problem is with security. Yet there is a hunger. “If you happen to go to the Wave mall in Jammu that has a multiplex in the four winter months,” he says, “it is flooded with visiting Kashmiris. In Jammu they joke about the malls and multiplexes surviving on Kashmiri clientele,” he adds.

The Broadway multiplex has got clearances from the District Commissioner, the Public Works Department, Roads and Building, the police, the municipality Srinagar Development Authority as well as the Fire and Emergency Services.

Not all young Kashmiris are enthused by the move. Writer Onaiza Drabu says: “To revive and equate social, and economic justice with a cultural change is already problematic, but the symbolic and very tokenistic approach to what can best be seen as a pacifying move is humorous to someone who has grown up in Kashmir and watched cinema halls being haunting spaces, if not occupied bunkers. To be fair, while definitely welcome under times not as dystopic, the opening of cinemas cannot be expected to be a sign of Naya Kashmir beginning. That would be a Kashmir not in almost a year of near total lockdown, where talk of cinema is strange when children haven’t been to schools for 10 months.”

But for many who had to leave Srinagar, the return of Broadway brings back poignant memories. Priya Kaul, an educator who now lives in Noida, recalls Broadway as the only theatre to screen English movies. She remembers watching One Flew Over the Cuckoo’s Nest and ABBA with her sisters. “After watching ABBA, both my sisters used to dance to their songs in that long corridor our house had. Those were the days….,” she says, tapping into the pain exiled Kashmiri Pandit families have still not overcome. Cinema, Indian or Western, has done much to heal the world. Can it fill the deep wounds of the Valley and its inhabitants, past, present and future?