Playing to the Google generation’s gallery 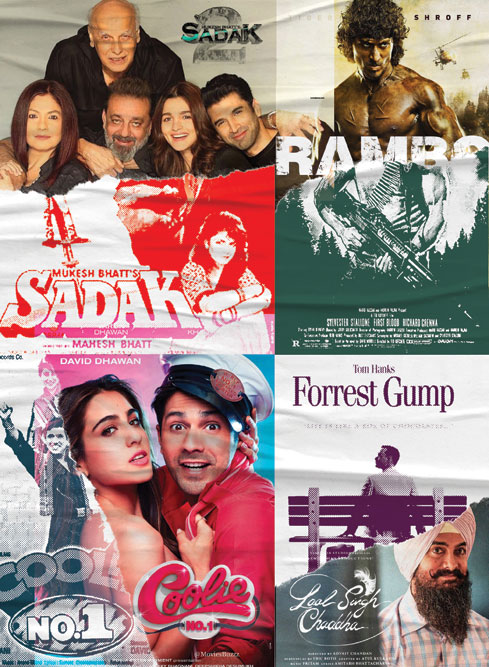 She’s talking about the making of Sadak 2, which sees her reuniting with her hero from the 1991 film, again being directed by father Mahesh Bhatt but joined this time by sibling Alia. It was a desire to revisit the magical nineties, says Pooja, when film sets—at least with directors like her father—were places where “we touched life in more ways than one”. “These were places which shaped our emotional intelligence, a time where everyone knew every unit hand’s name,” she adds. In Sadak 2, you see the same character, Ravi, 28 years later, changed physically, aged and withered, but very much still in love with Pooja Bhatt’s character.

So those who believe it is a mere remake are wrong, she says.

The past is no longer a foreign country for Bollywood as a new decade dawns. It is an all-too-familiar territory that doesn’t stretch too far back. Bhool Bhulaiyaa (2007), Bunty Aur Babli (2005), Dostana (2008), Love Aaj Kal (2009) and even Coolie No. 1 (1995) belong to the nineties and noughties, when directors were young and actors in their infancy. All of them are getting an update this year, with some either being remade like Dostana 2 which stars Kartik Aaryan and Janhvi Kapoor, or in the case of Coolie No. 1 allow one of young Bollywood’s favourite star sons, Varun Dhawan, to work with his star dad, David Dhawan.

It’s a safe space, a bubble far removed from the changes sweeping through the country, enclosed in its own repeatworthy item songs and well-visited pairs. Consider this: not only is Saif Ali Khan teaming up with his Hum Tum costar Rani Mukerji in a reprise of Bunty Aur Babli but he is also singing a new version of his Yeh Dillagi (1994) charbuster Ole Ole in a new movie Jawaani Jaaneman. As if that was not enough, his daughter Sara Ali Khan is acting in an update of his romance Love Aaj Kal, also directed by Imtiaz Ali.

It’s as much a guarantee of success as is possible in an industry where there is increasingly no safety net. It explains the casting of youngsters with those who have famous last names, buying of rights from Hollywood and south Indian studios, and sequels. From Laal Singh Chaddha, a remake of Tom Hanks’ Forrest Gump (1994), starring Aamir Khan to Rambo (1982) with Tiger Shroff, Hollywood classics are being adapted for the Indian screen. It makes sense in a world where millennials and centennials are increasingly exposed to the best in the world on their phones, laptops and television screens. It’s the ease of finding ready material, which is tried and tested, and it capitalises on recall value.

Rewinds and remakes are also a way for Bollywood’s ageing titans to not go gently into the good night. Having done Dabanng 3 which traces the origins of Chulbul Pandey, Salman Khan is now ready to give audiences Radhe: Your Most Wanted Bhai, which is both a callout to his 2009 comeback movie, Wanted, his character in Tere Naam (2003), and his real life persona.

But women’s stories are being told with a vengeance, partly because there are few male stars who don’t have their own production houses, and a handful who can open a movie wide. Crafting smaller movies around interesting stories can be worn as a badge of honour and makes sense commercially. The story is the star here and the actors are the characters. Take Alankrita Shrivastava’s Dolly, Kitty Aur Woh Chamakte Sitare with Konkona Sen Sharma and Bhumi Pednekar (who is emerging as a champion of sisterhood movies). Or Ashwiny Iyer Tiwari’s Panga where Kangana Ranaut plays a young mother who takes another shot at life. Or Taapsee Pannu’s roles in from Thappad to Rashmi Rocket.

Filmmaker Rahul Dholakia loves the fearlessness of the young women in the industry, their can-do attitude and their sistas-over-mistas style. Plus, there is a strong audience of young women with dreams and aspirations that match their onscreen heroines playing often real life women: take Janhvi Kapoor playing a Kargil war pilot based on a young, small town woman in Gunjan Saxena: The Kargil Girl or Deepika Padukone playing Laxmi Agarwal, an acid-attack survivor in Chhapaak.

It’s a great time to be a female actor. One only has to look at Huma Qureshi’s career, as she balances work in India with a growing global presence, moving from a lead role in the Netflix series Leila last year to a part in Zack Snyder’s Army of the Dead, also for Netflix. “I feel like a gypsy,” she says, as she snuggles up on a couch on a brief stopover in between a career where she can now afford to turn down social engagements she doesn’t want to do, things that little relation with her craft. “I’m a migrant. I can do a Tamil movie one month, a movie in Mumbai another, and then move to Los Angeles to work there for a while,” she says. “I don’t feel I have to have a spot, a city that is mine.” So she can be without her entourage, living in an Airbnb in Santa Monica or Melrose Avenue, or with all the accoutrements of stardom that come with life in Mumbai.

‘Progressive women’s stories’ are the rising stars on the story firmament. Zee5 found these dominated their content and taste clusters in 2019, at 34 per cent, followed by thrillers at 25 per cent, ‘edgy, young adult’ series at 24 per cent, crime at 11 per cent and experimental movies at 6 per cent. Viewers are showing their great range, and like traffic in Indian streets are indicating their ability to cohabit several platforms whether it is cinema screens, TV or digital screens.

Prabhat Chaudhary, founder of two of Mumbai’s biggest communications agencies in entertainment, Spice and Entropy, believes nothing has gone out of fashion and everything can be attempted. Anything well told has the potential to make money at the box office. Digital, he says, brings audacity and imagination to the subjects. “Southern cinema is bringing its own grammar of mass appeal. High social awareness will mean more real life stories. The content palette is getting more diverse.” So women’s stories such as Shakuntala Devi starring the wondrous Vidya Balan can co-exist with misogynistic movies from the Luv Ranjan School of Filmmaking, such as Jai Mummy Di. And sporty biopics such as Sania can be released along with sappy remakes of Hollywood’s The Fault Is in Our Stars, called Dil Bechara.

The challenge to match the best in the West is high. Also, points out Dholakia, our culture is casual and happy go lucky, so the entertainment quotient has to be high. “Biopics will work provided the character or story is interesting. Nationalistic stories will win, provided they are well made. Big films will be few and film shoots will be wrapped up in 45-60 days, which means more drama and less action,” he says. Unless it’s a film that stars Tiger Shroff or Hrithik Roshan—or like last year’s biggest hit, War, both of them. Limited locations, social commentary, an interesting cast and enough experimentation that is palatable to the Central Board for Film Certification. As filmmaker Nikkhil Advani says, given the current atmosphere in the country, audiences are looking for some kind of relief. The success of Good Newzz, Akshay Kumar’s IVF comedy, is proof.

The big boys will continue to play by their own rules within certain parameters suggested by the establishment at the Centre. So if Akshay Kumar plays a police officer in Rohit Shetty’s Sooryavanshi, he will make sure he is head of an anti-terror squad with enough opportunities for flag waving. When he plays a historical figure, he will ensure he is the beloved Prithiviraj Chauhan who may have lost against Mohammed Ghori but is revered for at least having put up a fight. And in his annual nod to the disenfranchised and disempowered, he is playing a transgender in the forthcoming Laxxmi Bomb. He is going retro as well in the forthcoming Bell Bottom, in which Nikkhil Advani has cast him as a spy in a story inspired by real events. “The world of the film is unique,” he says, “something we have seen in films like Don and Great Gambler. The 80s swag is back.”

‘Mera Bharat mahaan’ will also work, but with diminishing returns and entirely dependent on the quality of the film. Not all of it is voluntary. Some of it will be very much within Prime Minister Narendra Modi’s request to the industry to create ‘nation-building’ content. The announcements are out and the films are in production, whether it is Ajay Devgn’s Tanhaji or his Bhuj: The Pride of India about 300 Gujarati women who helped an IAF wing commander reconstruct an airstrip during the 1971 war. Or even Ranveer Singh’s ’83, to remind everyone of a time when India was a cricketing underdog and Kapil Dev was an unalloyed hero. Or Kangana Ranaut’s Thailavi on the life of Jayalalithaa.

Anubhav Sinha, one of the few directors who has chosen to make films his conscience can be proud of, says, “Instructions have been given to actors and filmmakers to make more films that feed into the current political narrative.”

For how long? That is the big question as entertainment becomes democratic, and increasingly every kind of content has an audience. If it’s a great time to be an actor, it’s the best time to be a storyteller, allowing directors to experiment with style and structure. Take Zoya Akhtar who moves seamlessly from co-creating the delicious Made in Heaven for Amazon Prime, the gritty but sublime Gully Boy (2019) for cinemas and the gorgeously shot episode in Netflix’s anthology series Ghost Stories, which focuses on her very personal fears of abandonment, ageing and death. Or Anurag Kashyap who can do movies, streaming services and short films at one go, and still feel renewed. The world is changing, he says. India is on the move. Migrating to nuclear families in crowded cities. “We don’t look up, we need drivers and Google maps,” he says. The Google generation has changed cinema and television, he says. “They’re kinder now. In one or two years, they won’t be. They’ll demand higher standards from Indian filmmakers.” It’s a good pressure to have, he says. It’s a good time to be a consumer in India’s Age of Diversity.