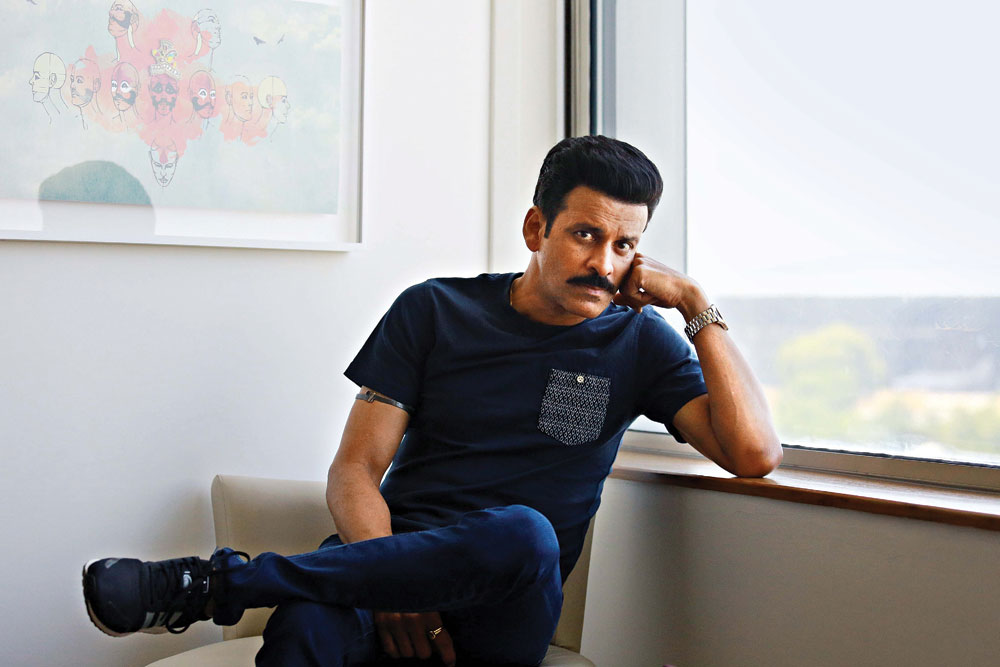 
ON ONE SIDE, a majestic, big-bellied Ganesh idol gets decorated by its maker. On the other, a frail, ageing hawaldar removes his police uniform on his final day of duty. Ganesha’s face seems to gleam with joy as jewellery is carefully placed around his waist. While hawaldar Bhonsle’s shoulders droop with the burden of having to let go of his identity of decades. Ganesha moves through the city announcing his arrival, while Bhonsle quietly locks himself into his home, awaiting a future he can’t foresee. The day sets and night looms, before a new journey begins, for both.

This is how Manoj Bajpayee’s latest release Bhonsle opens its world to us. Its first look was launched at the 2018 Cannes Film Festival, and India has had to wait two years for it to land here. Directed by Devashish Makhija, it deals with a polarised Mumbai. From art works dedicated to its titular character to spirited discussions around the insider-outsider debate, Bhonsle has already created a dedicated online fanbase. Dealing with the volatile yet prevalent conflict between Marathis and ‘bhaiyyas’ (north Indians) in Mumbai, Bhonsle brings our attention to human empathy and fairness, hardwork and inclusiveness. Manoj Bajpayee, who has also produced the film is a tad surprised by the response an uncompromisingly artistic film like Bhonsle has received.

Speaking from his home in Mumbai, one Bajpayee has returned to after spending three months of the lockdown in Uttarakhand, he says, “For such a film to touch all the right chords with the audience, and not the festivalgoing ones, but the audience that’s choosing to subscribe to the film [on Sony LIV], is very heartening. People are talking about the film being slow paced, in the same breath as they are dissecting the complexities of Bhonsle’s character and life around him. When you see this, you really start questioning if you know your audience well enough, and if you have done justice to them. It’s made me understand that for years our filmmakers and distributors have dictated what the audience should watch, without understanding the audience completely. It makes me wonder if we have given them a fair chance to understand and appreciate brilliant cinema, and Bhonsle has done that.”

Bajpayee realises that Bhonsle may not have found takers had it been a regular theatrical release, but the democratic nature of OTT platforms and the fact that cinemas aren’t running currently seem to have worked to the film’s advantage.

Playing the role of Ganpath Bhonsle, Bajpayee is clearly in his element, and this is easily among the top five performances in his three-decade-long career. He shines, as a 60-something retired constable, fighting loneliness and struggling for relevance in a society, where the youth around him are driven by caste divides and trifling insecurities. Bhonsle doesn’t say much, but he carries within him the melancholia of an ageing man with no family or friends to fall back on and lives the same routine life.


“Where my characters belong to is just one aspect of their personality. And for me they all belong to the story they are trying to tell,” says Manoj Bajpayee, actor

Thanks to director Devashish Makhija and cinematographer Jigmet Wangchuk’s poetic visual design, you can sense Bhonsle’s searing loneliness. We’ve seen Bajpayee play a similar part once before as Professor Siras in Aligarh (2015), but though their age and personalities seem similar, he insists that there’s a world of a difference between the two. “Bhonsle is not poetic and he’s a very strong man where nothing can shake him, except the nothingness around him. Siras on the other hand enjoys his loneliness, enjoys his music. They both seem similar, quiet people. But their conflicts and their environments are different, so are their priorities, which is why I had to approach both characters very differently,” he says.

More than a new artistic challenge, the film has brought to the forefront an age-old human-versus-human fight. An immigrant himself, Bajpayee moved from Bihar to Mumbai more than 25 years ago, but still doesn’t feel completely at home in Mumbai. “The awareness that this isn’t your home never really leaves you. It stares at you every day, and you just about come to terms with it. When I was starting out, I had to hold onto my pride, my dignity despite knowing that I have no one to fall back on here. I was stubborn to make it, and that’s perhaps why my fears didn’t override me,” he says.

He came into the limelight in 1998, in the role of the Marathi man Bhiku Mhatre in Satya, and now, after all these years, he plays a Marathi man again, who brings sanity and balance to a divided society. “Where my characters belong to is just one aspect of their personality. And for me they all belong to the story they are trying to tell. For me, the local-versus-immigrant conflict is one that’s bigger, it traces back to our history. It’s always existed. In all these years, every time I went to a foreign country, like America or the UK or Germany, I saw the same fight. And I would always ask myself why are we so insecure as humans? Bhonsle answered all those questions. He’s an ideal man and he’d ask you to talk about an open drain outside his society instead of which community deserves more jobs. He will ask you to focus on the real problems in the state. In that sense Manoj Bajpayee’s politics of concern matched that of Bhonsle the character,” he adds.

While he might have built a home in Mumbai, Bajpayee still feels uprooted. “When my daughter visits my village, she will be a visitor there. But for me I will be going back home. I think it’s the same for everyone who has left his roots behind. I feel free when I go back, a sense of freedom that I never feel in my own space in Mumbai. A space I strived and sacrificed so much to earn. A lot of people around me now face the same fears. I always tell myself that it’s important to acknowledge that, and provide people the opportunities I got,” he says.

On the other hand, a parallel debate of a similar nature looms large within the film industry. Bajpayee’s conversation with film director Shekhar Kapur where they spoke about how Bollywood as an industry needs to become less threatening, and not sabotage young artists, has been repeatedly quoted, in reference to Sushant Singh Rajput’s death. It stands out as a sensible voice in all the noise. Rajput’s death raised many questions about how outsiders are treated within Bollywood, answers to which Bajpayee believes don’t lie in lynching the so-called ‘insiders’, but encouraging existing new talent. “This industry, I always maintain, belongs to everyone. We forget the journeys of hugely successful people like Raj Kapoor, Guru Dutt, Vijay Anand. Who were they surrounded by? Writers from Punjab, UP, Bihar, all over the country. They would include real artists as part of their space, spend time with them, create new stories, celebrate festivals with them, and the result is the kind of cinema we have in the 1950s and 1960s. This is the real nature of our film industry. How and when did that change? It’s only in the last 20 years this kind of increasing divide is seen. Even when I came in, all I was told is I needed hit films to be accepted in the industry. Nobody cared if I had connections or relationships in Bollywood,” he says.

“When I went to foreign countries, I saw the same fight. And I would always ask myself why are we so insecure as humans? Bhonsle answered those questions,” says Manoj Bajpayee

Bajpayee feels the film industry should be more inclusive. But he thinks it is changing. “The power structure is being questioned every day, and when there is a healthy debate around it, it puts the power structure on the back foot and forces them to question their conduct. You can’t allow one set of people to say that this is the industry and the rest are on the fringe. This industry will die if this exclusivity will emerge and become stronger. Any good cinema grows on talent, not on power. We have to start intentionally and consciously pushing new talent and I think it’s upon each one of us. Let’s make this space more democratic so people are not scared of dreaming big within Bollywood. It shows in every little aspect—how we treat our newcomers, how we treat our subordinates on set, how we treat women in the industry. Every area needs to be looked into, and people need to change their ways to make it healthy and conducive to good work,” he adds. It’s a fight, which he believes, requires numerous participants to persevere till the end. “I feel like we are at the brink of a big change in the industry. Change for the better, where the culture is not of blind items and disruption, but creation. I just hope we all see it through.”

Despite his achievements, he believes he would someday like to have the option of leaving it all behind. “I have played parts in my career like in Gali Guliyaan [2018] or Shool [1999] where the characters have taken everything from me. It’s sometimes at the risk of my mental sanity. But that’s what I live for. I love to perform and I go to great lengths to achieve what I need to. But I think if I can let go of everything I achieve, and am not afraid to do so, it’s truly liberating too. My wife sometimes says I shouldn’t be pressured into doing a film just for survival. She’s okay to sell everything and pack up and go live in a village or in the mountains if it comes to that. That’s liberating for me, and true freedom comes from that. Not from holding onto the name or fame. It’s also when you’re able to pass on the baton to the next generation.”