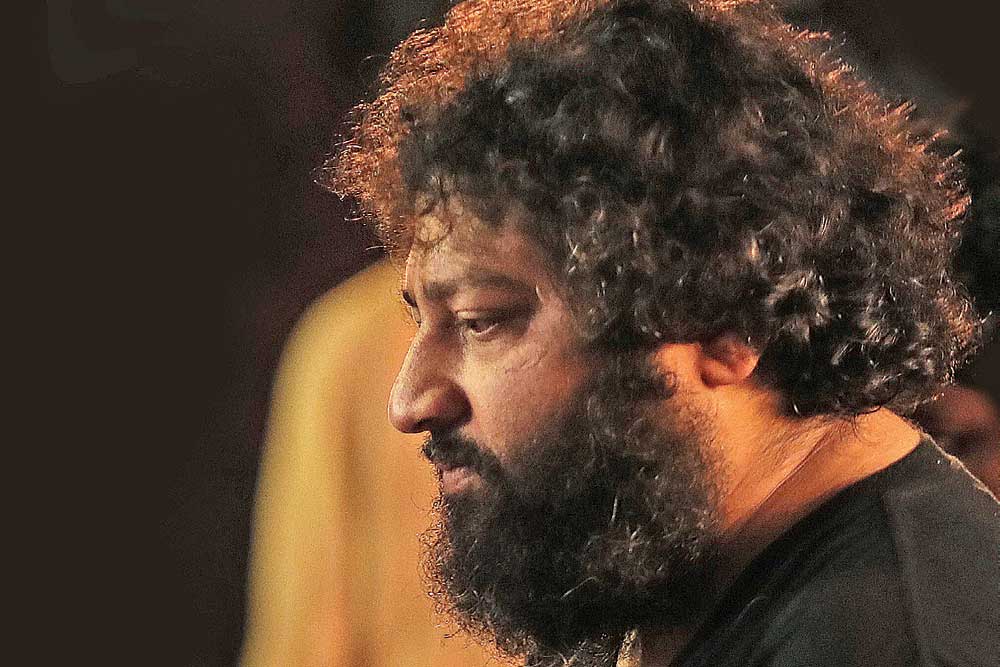 LIJO JOSE PELLISSERY is a Malayalam film director and actor known for his unconventional, quirky style of filmmaking. His debut feature Nayakan (2010), a crime-gangster film, won critical attention for its directorial accomplishment. City of God (2011), his second film, set amongst Kochi’s Tamil migrants and land mafia, is considered by many as a harbinger of the so-called ‘New Generation films’ of Malayalam cinema. Pellissery shot to fame with his 2013 dark satire Amen, a ‘divine comedy’ set amid the picturesque musical tradition of Kuttanadan village. Though his next film Double Barrel (2015) failed at the box office, it was widely circulated amongst niche audiences. The effervescent Angamaly Diaries (2017), that followed, replete with culinary and other delights, was set in the small town of Angamaly, and went on to become the sleeper hit of the year. For his most recent film Ee.Ma.Yau (2018), Pellissery has received the Best Director Award at the 48th Kerala State Film Awards and the Silver Peacock at the 49th International Film Festival of India. His latest film Jallikkattu is slated for release soon.

Having followed his work for years, I was fortunate that I got to meet him recently. We met on a Sunday in his bay-facing Kochi apartment/ workspace. He had just returned from Angamaly, and was taking a breather between post-production work on his latest film Jallikkattu. Bluesy guitar riffs played on the music system on a low volume, as we spoke of all things cinematic.

How much importance do you give these things …awards, festivals, etcetera?

I am thankful for them. However, I see film festivals and such things as places to simply feature the film or reach more and better audiences. I wouldn’t say that I mould films for festivals or awards. Never.

Is it because you don’t give much importance to awards, critical appreciation, audience approval, etcetera, that you’re able to be free and bold in your filmmaking?

I go with my intuition. I choose from a bandwidth of ideas that I find interesting. That excites me more than subscribing to formulae or genres. This happened on the go. It wasn’t so easy initially to convince people about ideas that were new and unfamiliar but it slowly happened.

Is that how you made a funky film like Double Barrel (2015) for instance, which is outside of any known framework? Did you foresee it working out? Were you prepared for the way audiences rejected it? Though it’s quite a cult film among some.

It was definitely not in the shape that I designed it and did not come out in the way that I planned. I knew that this is not the film that I wanted to release but it just happened that way. I might re-edit, re-shuffle it.

Double Barrel is actually an interesting film. There was a video game aesthetic to it…was that deliberate?

Frankly, I’m not really a video games person. The film was more in the comic book zone. I love comics!

That’s really interesting. You play with very different aesthetics in your films. City of God’s gritty scenes are very different from the over-the-top style of Amen, for example.

It’s not deliberate. I just try to do something different from what I have done before.

So producers trust you to deliver? Was it always like that from the beginning or you had to negotiate that space?

[The producers] seem to! Besides, I am very involved with the production from the very beginning. And I feel that I should have my say in what goes into the film and what doesn’t. Of course, this was not so initially. It never is for any filmmaker! So initially there is pressure to go with what exists already. And you do that to survive.

The performance element seems to be strong in all films such as Kathakali in Nayakan, Chavittu Nadakam in Ee .Ma. Yau, or band music cultures in Amen. Is this the influence of your own theatre background?

Not really. My father used to be involved in theatre—a popular theatre group Sarathy, the plays used to be directed by Thilakan Sir. Maybe that influenced me. Yes, the ambience and setting for theatre influence my film settings.

Was your father a major influence on you? You explore father-son themes in many of your films and your films begin with a dedication to your father Jose Pellissery.

I had a strange relationship with my father. I grew up in a boarding school till the fourth standard and my father was always very busy with his theatre group but in one way or the other he did influence me. I used to accompany him quite a lot on his tours. That was a blessing.

You have a textured, detailed relationship with the local place/context in all your films. Whether it be Angamaly in Angamaly Diaries or the coastal village of Chellanam in Ee. Ma. Yau., or even Kochi city in Nayakan. How does that happen?

I want the place to be a character in a film. I try to understand the facets of the place. And it happens on the go. Angamaly, of course, I know only too well. I practically live there these days. Every place has a folk tradition, a music tradition, food, language, slang… little details that are not necessarily visible on the first look but they slowly get to you, similarly to the audience too. I try to understand the place in its little details but I am not a researcher type, it just happens on the go…

There have been a slew of films recently with Kochi as the centre—the so-called Kochi films. How are your Kochi films different from the more rural/folk settings of your other films?

Nayakan, my first film, for example, was never meant to be an urban film. It was supposed to be set in a village but it became like that on the go. But it gave me a launch pad. Setting a film in Kochi is, of course, different. There are different dynamics at play. I go with what the plot of the film demands.

What are your literary inspirations? Ee. Ma. Yau. is based on PF Mathews’ Chavunilam?

I’m not an ardent reader. I’m actually quite lazy. I wouldn’t say the film is really based on Mathews’ book, rather inspired by it. It was a thin line that I innovated. But when I read the book I was sure that he was the right person to do the script and when he did it, the many dimensions that came out wowed me. I’m not smart enough to get a film right without a bound script. So I always have a script before I start. Once I have, it keeps changing on the set. And I think that’s how it should be. It should not be locked in like that but open.

Music and sound are very important for your films. Could you speak a little about that?

The Christian milieu that is part of most of your films… is that part of your growing up? Your films have a Christian world-view and you invoke Christian myths and iconography but it’s all very playful…

Yes, of course, my childhood influences of growing up in a Christian milieu does show up in my films. But they are not just mine, everyone has seen these kind of Christian symbols and plays on TV, for example. St George, for instance, is a symbol that has always been good for me… I see it as my lucky symbol, but not in a religious way. I’m not even spiritual. I don’t believe in a superpower or anything like that but I believe there is a grand design, a grand designer perhaps, who designs everything… you, me, designs the zebra! I don’t know who it is though… call it by any name.

People attribute influences of Quentin Tarantino, Stanley Kubrick, Emir Kusturica to your films. Is that correct?

Not like that. Of course, they have influenced me. Not just them, there are many influences. We are always influenced by something we have seen or read or experienced. We need these influences to create something. No one makes it from clay. If someone watches my film and wants to make a film inspired by mine, I’ll be more than happy. Everything is a copy… finally, that’s what I have figured.

What about the political? How do you place yourself within Kerala’s strong tradition of political cinema, cinema of the left, etcetera?

I do have my opinions on everything that’s happening around us. I’m fully engaged but unless and until my opinion makes a difference why should I make it? Everyone thinks we can control or influence other people. I don’t think I have any such influence. My statement, if any, is my cinema. I don’t believe in walking down the street and protesting. See it’s this simple: I believe that when a flood happens doctors should not go to the flood-affected venue and cook, they should be there, attending to and treating people. I make films, that’s what I do, I don’t make moral lessons. Art is for art. I don’t preach. I don’t really do politics like that.

The last scene in Ee. Ma. Yau. set against the sea is so beautiful and elegiac, you open up a beautiful horizon… the door between life and death is very fluid in your films. Do you believe in it? This vision?

Cinema is essentially beyond reality. We could play it real or make it look real, but cinema in essence is not real. It’s an illusion. You don’t have to play it real, no? I try to play with that illusionary nature of cinema.

Finally, can you tell us something about Jallikkattu, your latest offering?

No (laughing). The release date has not been set yet. I don’t know how to describe it in terms of genre, etcetera. All I can say is that it’s about the man-animal relationship. There are a lot of crowd sequences in this film. What can I say… choreographed chaos… Watch it…