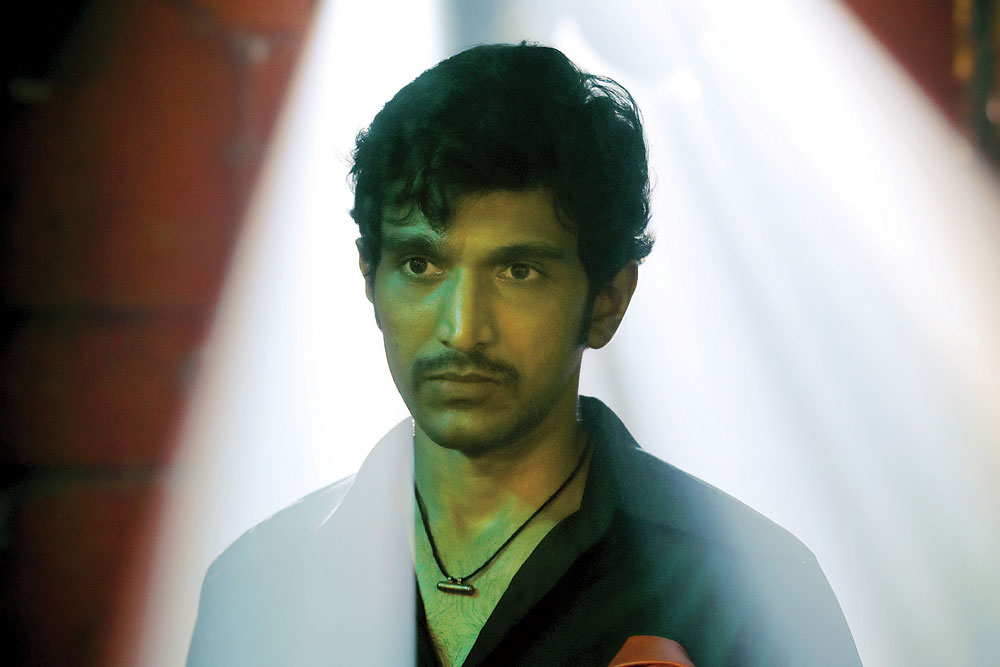 
FRESH FROM THE success of playing Harshad Mehta in Scam 1992 (2020), Pratik Gandhi is now acting in Vitthal Teedi as another conman, a gambler this time who has no other vice but his love for cards. Nagesh Kukunoor is working on a biopic of Ramalinga Raju adapted from the Kingshuk Nag book, The Double Life of Ramalinga Raju: The Story of India’s Biggest Corporate Fraud (2009). The legend of Ma Anand Sheela continues unabated: after Wild Wild Country (2018) comes a fawning Shakun Batra documentary, Searching for Sheela, and a series is in development by Priyanka Chopra Jonas. And oh, Bunty and Babli, the loveable con pair of 2005 who defined the small-town entrepreneurial spirit in post-liberalisation India, is coming out of retirement in a sequel to investigate a spate of robberies that carries its imprimatur.

Why do conmen and conwomen make for such compelling stories?

Every generation has its favourite con movie. In the sixties, it was Vijay Anand’s Guide (1965), where Dev Anand played Raju, a guide who falls in love with the wife of another man, becomes her manager and then eventually, as her fame as a dancer rises, he escapes to a drought-stricken village where he is mistaken for a holy man who will bring much-needed rain. In the seventies, it was Mr Natwarlal (1979), a gentleman conman who indulges in dubious deals. And the noughties had Bunty aur Babli (2005), two small-town hustlers who decided to short circuit the system to become rich overnight. The love for con artists is all-pervasive in society as well. It comes from a failure of institutions to do what they are supposed to. If the police doesn’t deliver, the criminal godfather steps in. If life doesn’t live up to expectations, then self-declared godmen and godwomen step in. When the Constitution fails to deliver the rights guaranteed in it, then people can only hope for miracles. And only con artists can promise those. As Shammi Kapoor says in the 1963 film Bluff Master: “Zubaan ka dhanda kabhi nahin manda (the business of glib talk is always booming).”

The con artist can promise riches, freedom, even immunity for criminal acts. Pramod K Nayar of the University of Hyderabad says those who undertake such acts are reviled but also secretly admired for having ‘beaten the system’, and for doing what many may privately want to do but lack the courage, conviction and intelligence to do so. “The ‘system’, an anonymous leviathan, frequently seen as an oppressive tyrannical and remorseless machine, has been taken apart from the inside, using its lacunae to destroy it. This embodies a certain amount of intellect. It is a mythical David/Goliath, underdog/beast battle and it is the role reversal that appeals,” adds Nayar.


That may explain the enormous attraction of Ma Anand Sheela, Osho’s secretary, manager, impresario, who was imprisoned for 39 months on charges of mass poisoning, assault and immigration fraud. Pritish Nandy, who wrote memorably about Osho in The Illustrated Weekly of India, recalls her as a major presence at Rajneeshpuram in Oregon. There she was, dressed in tiny shorts and twirling a shiny Beretta, when Nandy met Rajneesh who broke his maun vrat (self-imposed silence) to give him a long interview. “She was quite amazing in those days. Everyone was falling over themselves to seek her attention. She ran the whole show. But then, when the show got busted and she ran off, reportedly with all the cash, and Rajneesh started attacking her in public, she started losing ground. But the truth is she had a strong group still rooting for her. When she went to jail in Germany, that group dissipated. After being sent back to US prisons, she lost it all. Meanwhile, the Rajneeshis also splintered,” he says.

In Netflix’s new documentary, Searching for Sheela, she is surrounded by Delhi and Mumbai’s glitterati who are practically grovelling at her feet. Karan Johar speaks appreciatively of her scandals being of proportions that even Bollywood stars would envy. Sanjay Garg of Raw Mango fame is dressing her in his finest jackets and kurtas. Bina Ramani speaks of her own public humiliation after Jessica Lal’s murder in 1999 at her Tamarind Court party. Photographer Raghu Rai tries to get her to part with her story, as artist Jatin Das is all ears. She remains reluctant, evasive, sometimes playful, at other times rude. “They want to occupy themselves with my scandals so that they don’t have to look at their own scandals,” she says at one point in the documentary.

The largescale mobility from towns to cities enabled the shedding of old skins and the acquiring of new identities. Young men and women could pass off as something they weren’t in a society that was previously straitjacketed by caste, class and religion

Even in that, thinks Sumit Purohit, the writer of Scam 1992, Ma Anand Sheela is trying to con us. A good conman/conwoman needs to constantly justify their actions to themselves, he says. They need to believe in their own cult. Only then can they sell it to others. This is what happened with Harshad Mehta too, he points out. “From the guy who believed in research and market fundamentals, he became one who thought he could move shares just by creating perception about them. He truly started believing in his theories even though they didn’t have any factual basis. So every conman/conwoman cons themselves first before conning others. I think most of us do this occasionally but a con artist can do it for longer. Harshad’s fall also was the result of the fact that he continued to live the con and refused to see the reality,” he adds.

THEN THERE IS the big con artist and the little con artist. Dibakar Banerjee’s Oye Lucky! Lucky Oye! (2008) was inspired by Delhi’s real-life Bunty Chor. Again the idea was of a common man who is a nobody but becomes somebody by extra-legal, entrepreneurial means. Manu Rishi, who wrote the dialogues for Oye Lucky! still remembers asking Banerjee why he wanted to make a thief his hero. “I find the story very tasty,” he told him. After all, the urge for a good life is universal, it’s the little guy shaking his fist at the system telling it that he will overcome it. But, of course, the system wins eventually. Rishi recalls a dialogue from the film: “Lucky zyaada syaana na ban, yaad rakhi yo syaana kutta goo khaata hai (A senile dog ends up eating its own shit).”

That’s the dilemma at the heart of every con. How much can you get away with without getting caught? Pratik Gandhi’s Gujarati web series, Vitthal Teedi, answers this question, talking about the difference between the player who depends on skill and the gambler who relies on luck. Gandhi walks that line adroitly, showing us that playing cards is not always about the addiction. “It was very much part of the ethos of Saurashtra in the ’80s and ’90s,” says Gandhi. “This was the life of many. And yet it’s an emotional story, a man who is like a wall for his family.” He found it fascinating to play the player—it’s all about the eyes and facial muscles, he says.

In a sense, it is playing the bluffmaster, a man who can tell tall stories with a straight face, and win everyone’s trust. It could be a politician, a godman, a businessman. The clothes may vary but the con remains the same. It’s the silver foil on a cow dung patty.

In 2005, Bunty aur Babli suggested that it was not only acceptable to lie, engage in fraud, disobey one’s parents, and flaunt conventional modes of behaviour, but that it was necessary to do so in order to succeed in one’s ambitions. Borrowing other identities was no big deal, points out Purnima Mankekar, professor of anthropology at University of California, Los Angeles, it is merely an extension of the call centre phenomenon of being Nalini by day and Nancy by night. The con artist is at ease in multiple identities. Rakesh can become Bunty as he heads from Fursatganj to Mumbai to become the next Tata, Birla and Ambani, while Vimmi becomes Babli in her aspiration to be a supermodel.

The idea gained currency and there was a spate of successful and not so successful con movies in the Hindi film industry, led by Badmaash Company (2010) and Ladies Vs Ricky Bahl (2011) from Yash Raj Films, as well as Abhishek Chaubey’s Ishqiya and Farah Khan’s Tees Maar Khan, both in 2010. There was clearly something in the air at that point which underlined the idea of making and remaking identities and the idea of the con and counter-con. The largescale mobility from towns to cities enabled the shedding of old skins and the acquiring of new identities. Young men and women could increasingly pass off as something they weren’t in a society that was previously straitjacketed by caste, class and religion. It allowed for the con to flourish and escape detection. It made the con almost attractive and charming.

It echoes Amitabh Bachchan in Mr Natwarlal, “Business karoonga. Char paise kamayunga, do sarkar ko doonga, do Bhabhi ma ke charno mein rakhoonga, aur do Shanno [his wife] ko doonga (I will do business, earn four paise, give two to the government as tax, two to my bhabhi, and two to my wife),” to which his Bhabhi Ma says, while twisting his ear, “Kamayega char aur bantega chhe (If you make four paise, how will you distribute six)?” The con even defies the rules of mathematics. It defies 39 months in prison, an alleged $55 million in money from Osho funds, and a public image that is all about sex, lies, money and god, everything that drives men and women, and their passions.