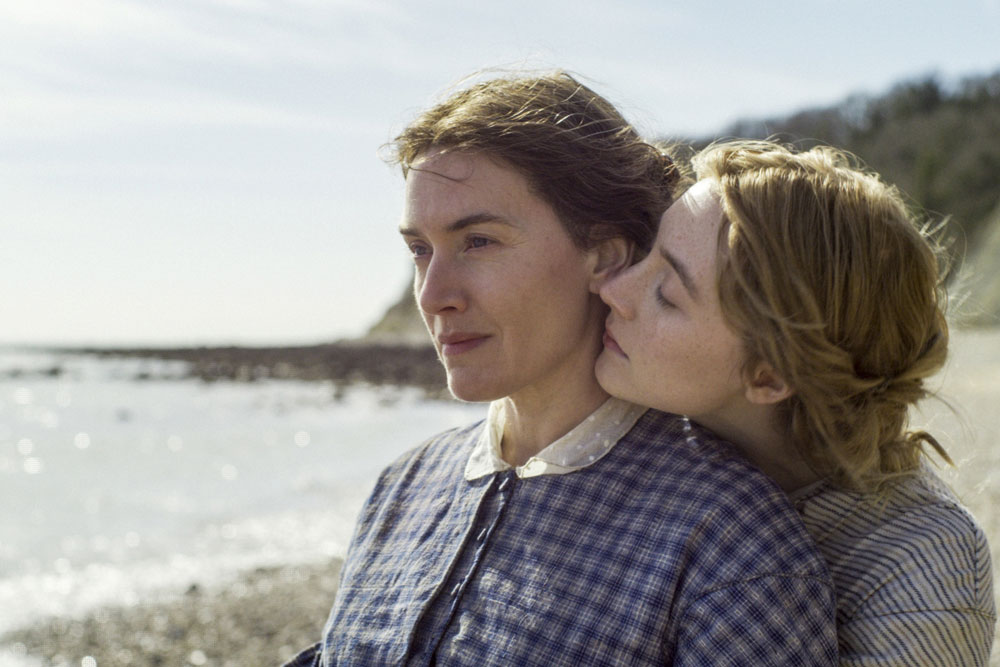 A still from Ammonite

In Ammonite, Kate Winslet plays the British paleontologist, Mary Anning, who spent her life searching for giant ribbed and spiralled fossils of extinct underwater mollusks. Anning falls in love with her geologist friend Charlotte Murchison, played by Saoirse Ronan, in an age when such a romance was taboo.

The love scenes were beautifully done, Kate. How did the two of you find intimacy without dialogues?

Well, the most important thing to Saoirse and me and Francis Lee [the director] was that the physical intimacy underpinned the longing and the love that these two women feel for one another in a very truthful way that supported the narrative. And so we discussed the structure of each intimate moment when we were in rehearsals and that was very helpful, just because often, as with any scene of an intimate nature, it’s very important for each individual to understand exactly what’s going on, just because you sort of have to choreograph things, a little bit like a dance apart from anything else for continuity reasons. You can’t just improvise each take, it’s the same as another scene in a sense that you really do need that structure. But you need that structure more so than in a love scene, because you don’t want to have to think about those details, you want to be able to stay connected to the individual. And for Saoirse and me, I think not having words was a real, just reflection of Mary and Charlotte’s relationship.

You seem to be working endlessly. What do you do to keep your mind and body balanced?

That’s a very interesting question. And I will try to figure out and answer as best as I can. I mean I am not very good at resting, and I need to get better at resting (laughs). I find it very hard to slow down, I find it very hard to switch off my brain, so for example things very hard am terrible at, because I just sit there thinking well there are all these lists of things that I am making in my head the whole time, I am a terrible student when it comes to meditation (laughs). I cook a lot and I genuinely find that extremely relaxing and very distracting if my mind is busy elsewhere. What I am getting better at now as I am getting older is whenever I have a five minute breather away from set, or away from a difficult scene, I just actually try and turn my phone to flight mode or switch it off and just take five minutes and just close my eyes and just think about nothing if I can. But as I say, it’s very hard for me to switch my brain off, I’m just not really trained that way, so I guess I probably need to get better at it. But yeah, so those are the things that I try and do.

Most actresses would ask for a body double but you did not. Was the character within your comfort zone?

You know me and know that I always try and be as truthful as I can in the roles that I play and also in the things that I say publicly, I think now more than ever because young women crave integrity and I think they crave leadership and they crave strong role models, now much more even so than 20 years ago. And so, I do take that, I feel a responsibility to those young women. It was important to Saoirse and me to contribute to the construction of our scenes and to really use our voices as our characters and underpin the narrative with what we believe was right for these two characters.

In these days of Covid, you are shooting a new TV show. How is that working out?

There was a lot of hesitation. And most of the Summer back in the UK during Covid was spent having endless conference calls with HBO and AT&T, trying to actually all figure out together how we were going to return to work. What do we ask of the crew, how do we deal with the actors, etcetera, etcetera. So very nerve-wracking coming back into work. But I have to say, we have a great Covid compliance team, we are tested every single day, every crew member wears a full mask and face shield on set, they are not permitted to remove that unless they are stepping away to eat or drink something. The actors between takes, we put on our mask and or our face visor, which is sometimes difficult because of makeup, but we find ways to do it so it kind of just sits a little bit away from the face. And we work in zones, we work in the green zone and the yellow zone, and the green zone is anyone, the actors and anyone directly connected to the actors, so the main shooting crew. So, the set call is like 6.30 in the morning, the set becomes a green zone at that point and anyone in the yellow zone has to go away and they cannot come anywhere near us all day long. So, it’s a lot of detailed stuff, the catering setup is different, I actually always take my own food to work anyway, I just find it easier because then I can eat.

Saoirse, were you nervous about the sex scenes?

I wasn’t nervous, no. I never really felt that nervous doing sex scenes. I guess I’ve always been in good hands, I’ve been working with people that I trust, which is a massive thing and I know not everyone has had that but I’ve been very lucky that I have. But I think what sort of set this experience apart from the rest is yes, definitely the director took a step back and allowed Kate and me to really hold the reins in terms of the choreography and where the scenes would go. And again, like I was saying, just sort of having the authority to have creative control over something and technical control over something is incredibly helpful when you then go onto set to do a scene that can make you feel incredibly vulnerable and instead, I think we felt quite empowered by it.

You are from Ireland. How has it been living through Brexit and the pandemic?

During the pandemic—because Brexit and the pandemic, they’re very different—it’s been a weird time in the UK, because the UK consists of four countries and so the plans that need to be put into place are specific to people living in each country. And so, it’s been quite a confusing time for everyone. Yeah, it feels very, very uncertain apart from the fear and just kind of not knowing when we’re going to come out of this. Ireland, for example, being a united country, I think has handled the pandemic really, really well and everyone’s been on the one page whereas with the UK it’s just a different beast altogether because there’s so much that needs to be taken into account. So yeah, I don’t really know how to answer that other than it’s just been interesting to see how different people have responded to it, some people don’t even believe in it and some people do and some people are taking it incredibly seriously as they should and really pulling together. One of the positive things that I’m seeing from communities throughout the UK in Ireland as well is sort of definitely coming together and finding a way to really entertain ourselves while all this is going on and to stay active and alert and to still try and socialise… while still physically distanced, bring people together. It’s a hard time and so I think everyone’s trying to do the best that they can.

How have these experiences influenced your life?

It changes… it’s had an effect, I suppose, on how much I value the people closest to me and how I spend my time and who I spend my time with. And I think that’s something I will carry with me once we’re over the pandemic.

What is your relationship to sexuality?

I think everyone’s relationship, man or woman, to sexuality is their own relationship, it’s their own bond and that’s sort of complex and very individual. And I think it’s also probably something that changes, I know definitely for a woman your relationship to sex is something that evolves as you grow and that’s kind of like an ongoing thing. So, there are many actors I know that aren’t really comfortable delving into that realm with their characters or anything that they’re in and there are others who feel very empowered. I think both are wonderful and whatever you’re comfortable around.

Do you think men and women are viewed in the same light as far as sexuality is concerned?

Yeah, absolutely. Lots of men and women are like, you go to a bar, yeah, of course, you’re judged in a sexual manner before somebody meets you, and they get to know you. That’s kind of a natural thing they think. I definitely think there’s a way with whatever art form you’re involved in, to harness that, and to maybe rework that or rethink that. But yeah, I think that that’s something that you can’t get away from whether you’re shyer, in terms of your sexuality, or sex, or speaking about orgasms, or whatever, or you’re not, and you want to be very open. And yes, it’s everywhere you go.

What does love mean to you?

You need to get to know a thing or a person or an animal or whatever it is that you start caring for, in some way. And I definitely think that love is something that sort of evolves over time. And so yes, I do believe in love. But I think it’s more complex than just fairytale love. Which makes it better when you have it.