If only he had good performers, Sudhir Mishra’s formulaic narrative might have worked 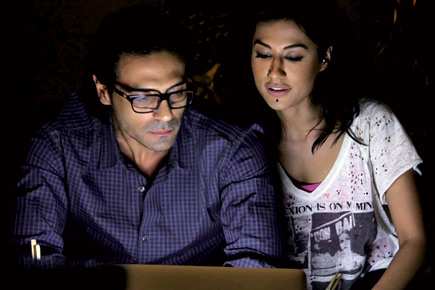 If only he had good performers, Sudhir Mishra’s formulaic narrative might have worked


Inkaar is a film about what  happens in the incendiary mix of office and sexual politics. The nature of such affairs depends entirely on the kind of office space shared by the participants. An advertising agency is in the business of selling consumer products, and so, in this space, one becomes adroit in negotiating the combustion of sex, gender and work. Advertising folk, as in this film, tend to allow an overlap of office time with party time, professionalism with lifestyle.

So on a work  trip to Thailand, CEO Rahul Verma (Arjun Rampal) has what appears to be a pretty standard fling with his young protégé, Maya Luthra (Chitrangda Singh). Initially, this is seen as par for the course. Nobody talks about exploitation (his) or climbing the corporate ladder (hers). But then Maya turns out to be an exceptionally smart and ambitious woman who excels at her job. That’s when Ms Luthra, rapidly promoted to ‘National Creative Director’, but still reporting to the CEO,  is stymied at work by her ex-lover.  Unable to function at her creative best, she complains of ‘sexual harassment’ and an impartial investigator (Deepti Naval) is called in to arbitrate.

So, yes, the subject and the situation in Inkaar are absorbing, enough for us to get involved. Unfortunately, director Sudhir Mishra fails to make optimum use of it. First of all, the ‘courtroom’ treatment he adopts—‘his’ story versus ‘her’ story—is clichéd, and the back and forth versions of events and conversations tend to muddle the issue.

Even so, had the actors been good performers, Mishra might have been able to surmount his formulaic narrative. Rampal and Singh just don’t have the skills to create the moral ambiguity that is intrinsic to the situation. We need to see individuals caught in a
dilemma of conflicting ethical and professional interests. We need to see two people faced with a ‘Hobson’s choice’. But the movie looks instead for a tame resolution.