The movie leaves you startled, but not moved 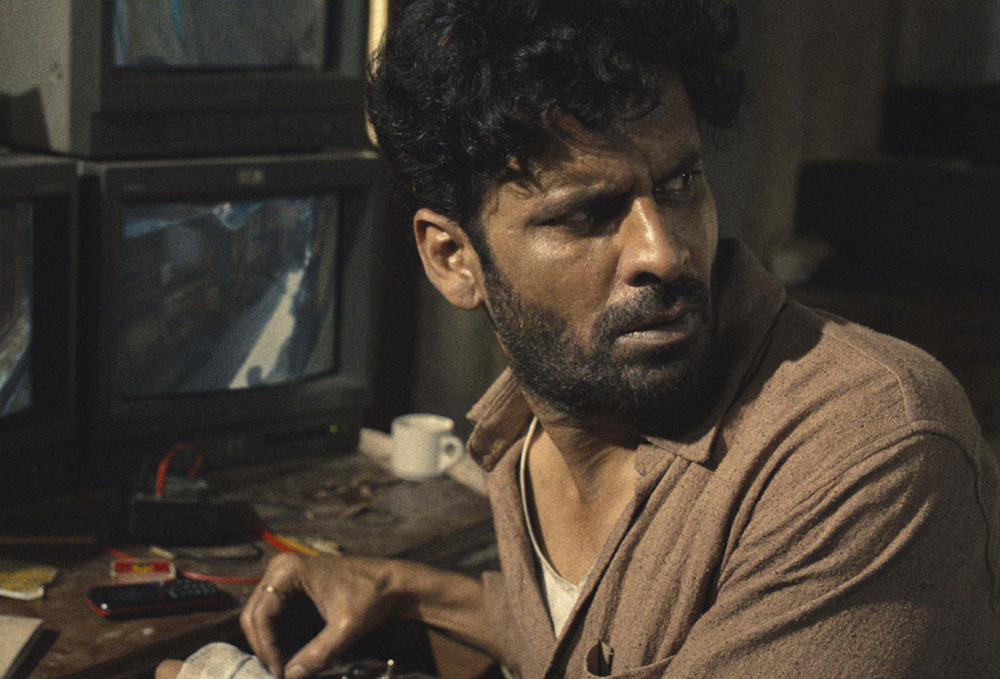 Gali Guleiyan is a lane in Old Delhi’s Chandni Chowk where this film is shot. With its dilapidated buildings, its overhead electrical wires criss-crossing a maze of streets, its run down shops and its general feel of decay and sadness, this urban space is a rabbit warren. Human decay and despair, not the exotica of heritage and history, is reflected in the lanes of Chandni Chowk. Perhaps, to escape from this decomposing exterior, the protagonist in the film invents an interior world to compensate. He lives in a universe of his own making.

Khuddoos (Manoj Bajpayee) appears at first to be some sort of electrician, but we soon realise that he has no professional life. He has a whole set of CCTV screens in his home, connected to cameras installed outside, through which he looks out of his locked home. He talks to no one, mutters to himself all the time, and is obsessed with the voices of a family next door that he can hear clearly through the thick walls of his home.

The voices tell him that there is a young boy next door who lives with his mother and father and baby brother. His name is Idris (Om Singh), Iddu for affection. The boy is a lonely and introspective young man, wise beyond his years, who asks his mother (Shahana Goswami) all kinds of questions about why people have children, and why she had him. He cannot understand how a sensitive person like his Mom married a brute like his father (Neeraj Kabi), a butcher by profession, and also by personality. We see scenes of Iddu being slapped around by his Dad. It is clearly a case of child abuse. The boy keeps telling his Mom that he wants to get out of the hole he lives in, and promises to take her with him. On one occasion, after he hits his father back in a scuffle, he runs off and gets as far as the railway station, before he is brought back to suffer further blows.

The film is scripted to give us the feel of two stories – that of Khuddoos and Iddu – running parallel to each other. But are they? Once, through his spy cameras, the lonely adult spots the young lad running out of his home, and onto the street. To find out his story, to ask him about where he goes, and about his horrible father, Khuddoos rushes out on to the road and follows the boy, till he leaves the Old City. Then he can go no further in pursuing him, because the gullies of Chandni Chowk have trapped him, and a retreat to the interiority of his own mind is the only option.

‘Gali Guleiyan’ is a film about a man lost in the labyrinth of his own head. The tangled overhead wires that form the electrical canopy of the Old City, work as a metaphor for the intertwining neurons and synapses that make up the webbing of his brain. He has only one connection to the world that we, the audience, recognise as the cognizable present. This is a friend (Ranvir Shorey), a man who always looks out for him and helps him survive, at least physically, by providing him with groceries and medical attention.

Manoj Bajpayee, trapped in the discipline of method acting, looks distraught, half starved, and unkempt enough to be convincing. But is this verisimilitude to a character enough to make the movie gripping. Perhaps not. The film is entirely without humour. It has an admirable story, but fails to find the emotional associations between characters, and between the director and the audience. This could have transformed it into a stirring, poignant, heart-breaking and memorable cinematic experience. ‘Gali Guleiyan’ leaves you startled, but not moved.