Except for the great kissing scenes, this ‘coming out’ movie takes too straight a turn. 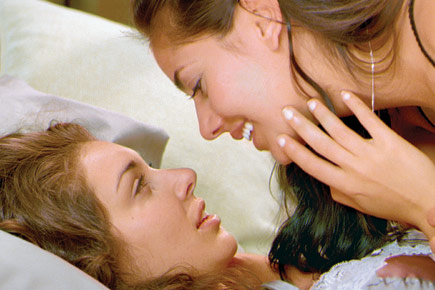 Except for the great kissing scenes, this ‘coming out’ movie takes too straight a turn.


Except for the great kissing scenes, this ‘coming out’ movie takes too straight a turn.

The women fall in love on a visit to Oxford. Holding hands, they walk around Oxford, and when they make love, Leyla (Sheetal Seth) says that for the first time in her life she has felt alive. She’s dated men before, in a fashion, but never seen the constellations.

Leyla, an Indian Muslim in London, is so passionate about her discovery that she goes home and tells her shocked mother. Tala (Lisa Ray), though, is older and politically and sexually more prudent. She is Jordanian, of Palestinian origin, and handles her orientation by getting engaged to rich men from the Middle East and then backing off at the last moment. She does it a fourth time after she falls, head over heels, for Leyla.

Shamim Sarif sets out to tell you how the problem of ‘coming out’ is more complex for women of ethnic or immigrant origin, but ends up with a diluted version of her argument. Scandal and opposition are minimal and the women seem to have a pretty easy time of it, stealing kisses, locking eyes across the furniture, hands all over the place. The fathers seem to be the sort of genial blokes a girl can bring her girlfriend home to.

Think of the screenplay Jane Austen could have written, were she so inclined. She would have brought into play her exquisite observation of the relationship between women, money, class and prejudice. Sharif does not texture her film with such nuances, though her plot has opportunity. Tala is rich, with homes in London and Amman; Leyla is a middle-class Indian. Tala is confident, a touch arrogant and dismissive; Leyla sensitive and artistic, a writer. But there are no layers in this film. The thinking is all too heterosexual for comfort. If it weren’t for the gorgeous kissing scenes, you might say Shamim Sarif can and does think straight.