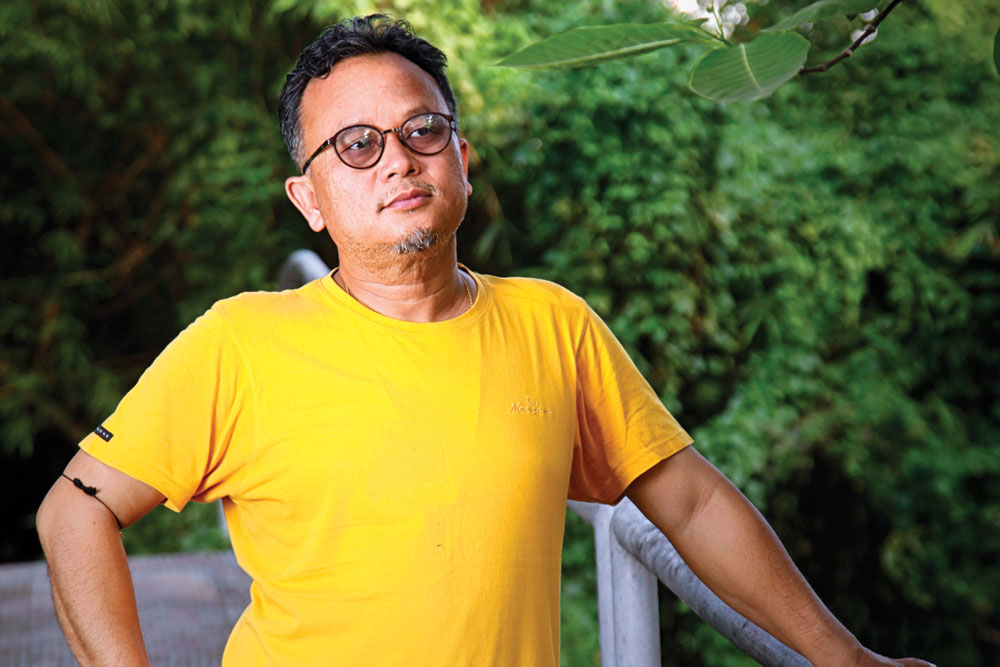 
STACKS OF PLACARDS lie scattered on the ground, each with a slogan written in red English alphabets against a white background. But they are unlikely to make sense to those who don’t know how to read the Manipuri language. One placard reads, “Blessed is our Motherland” but the majority reads, “Manipur’s territorial integrity cannot be infringed”. The same slogans are raised in a mammoth rally. This is how the film Nine Hills One Valley (NHOV) featuring two languages (Manipuri and Tangkhul) starts its cinematic journey, hinting at the tensions that simmer in the state. NHOV is a film that examines the “hill and valley” divide within Manipur: the dominant Meiteis in the valley saying no part of the state will be carved out and the two main tribal groups of the hills; the Kukis and Nagas asking for a separate identity even as both contest the demands made by the other.

Independent filmmaker Haobam Paban Kumar’s debut film Loktak Lairembee (Lady of the Lake), 2016, set in the backdrop of the Loktak lake in Manipur, where fisher folk face an uncertain life, was the toast of inter­national and national film festivals— from Berlin to Busan. The response to his second film Nine Hills One Valley hasn’t been as superlative, but it made it to the jury special mention at the Film Bazaar Recommends in 2020 and featured in the India Gold section of the 22nd Mumbai Film Festival 2022.

“When I tried to enter NHOV for the Busan film festival, I was told it is more like a documentary film. So, I told them that they will have to consider my third feature film Joseph ki Macha (Joseph’s Son), which I am editing, as my second film,” says Paban with a rueful laugh. The “documentary film” comment comes from the way Paban has struc­tured the cinematic narrative around Anam Ahum, a Tangkhul (a Naga tribe), on his way by road to Imphal from an un­named hill area, to gather more details about his daughter’s impending shift to Delhi for her further studies. Anam meets people during his journey along the narrow hill curves, and conversa­tions ensue about the various conflicts that have impacted their lives.

According to Paban, “It is the film­maker’s prerogative to slot a film as a documentary or a feature. In terms of using ‘documentary elements’ in my film by way of the inclusion of actual events unfolding, it is hardly a new con­cept, you see that even in mainstream commercial films.”

Paban’s film captures the turmoil in Manipur over territorial demands and political identity, the dynamics of ethnic communities facing off against each other, then going outside the state where they face racism, and the impending toll of developmental proj­ects, like the railway line connecting the state to the rest of the country. By playing out these themes in the course of person-to-person con­versations, mostly in the confines of a vehicle, he looks at the claustrophobia that lurks in the personal and political spaces in the state.

But the fact remains that not many outside the region are clued into the political history of Manipur and a film touching on the broad themes flagged in NHOV is bound to be a lot to grapple with. Anam’s journey in the film is undertaken on Black Day, which marks a time in 1993 when Naga militants killed Kuki civilians, which was then followed by cycles of retaliation once the Kukis started grouping and arming themselves. Nearly three decades later, there has been little closure in the way of justice. This is reflected well in the film in the way individuals carry their trauma and past experiences.


Each narrative in the film looks at individuals seeking solace, over the years and hoping for something better, some peace; reflected in the way they are able to share their anguish at a personal level, though there is no support at the institutional level. But some protagonists of the film have been unable to pull through. For example, a woman who was to be in the film to share her family’s loss in a massacre underwent acute mental health is­sues triggered by anxiety over the pandemic and the lockdown. “I had established a rapport with her over two years before filming, but she was not in a good space to be a part of the film later. I had to resort to sourcing news footage of her speaking at an event earlier. My own appearance in the film was necessitated by her non-appearance in the film as a protagonist,” says Paban.

Paban further adds, “Perhaps the con­flicts being portrayed in the film are too local. But the irony is that at its core, it is about communication and how conflicts in both the personal and political space are centred around the politics of language and expression and the posi­tioning of I/we against you/them.”

The multilingual aspect of Paban’s film is significant; the use of Manipuri and Tangkhul mirrors the multicul­turalism of the state amidst its political fissures. Manipuri language, spoken by the Meties, the dominant commu­nity in Manipur and concentrated in the valley, remains the medium for official communication and is seen as an imposition on the tribal commu­nity. But because each tribe has its own unique language, Manipuri becomes the common lingua franca. In the film, the main protagonist speaks in Tangkhul to members of his tribe but switches to Manipuri when he talks with a Kuki or a Meitei.

PABAN, HIMSELF, A MEITEI, adds that he is aware of the multi-layered politics around language in Manipur and elsewhere, “For me, representation is very impor­tant. It would have been fundamentally wrong to make Anam Ahum, a Tang­khul, speak in Manipuri.” He adds that learning a language different from one’s own is often a way to survive. “A Hindi-speaking migrant labourer who comes to Manipur for work will try and learn Manipuri just as someone going outside the state will resort to speaking in Hindi or English to communicate. The problem comes from the imposition of one language over another. Imposition can only bring friction,” says Paban who himself grew up juggling three lan­guages, Manipuri, which was spoken at home, and Hindi and English which he studied at his Kendriya Vidyalaya school. The filmmaker recalls how his mother was amused by his decision to make Manipuri films, given he couldn’t read or write the language.

There is deep satisfaction when the people I know in the hills tell me they feel heard and seen in nine hills one valley, says Haobam Paban Kumar, filmmaker

I ask, why is conflict integral to both his films? Paban says, “I cannot even dare to make the kind of films that Arib­am Syam Sharma makes,” referring to the critically acclaimed film director who has been associated with Mani­puri cinema since its inception 50 years ago. “His films are layered in the nuances of Manipuri cultural roots, something that I will take a lifetime to even discover. There is a deep nostalgia in his works that are commentaries on how Manipur society and culture is changing while I look at the contem­porary conflicts in Manipur that I see around me,” he says. Paban’s foray into the world of Manipuri cinema and film­making started in the early ’90s when he assisted Aribam Syam Sharma. Will he make commercial films like his mentor who has also made runaway box office hits? He replies promptly, “There’s no way I can carry off a com­mercial film!”

So, what happens to a film like Nine Hills One Valley then? “It isn’t a film that will get the crowds to the theatre for sure. Experimental films can have a life only at film festivals, which is why MAMI’s recognition is a special feeling,” says the filmmaker who be­lieves that OTT platforms started out in India with an aim to support indepen­dent films but gradually turned to big names and big draws in the commercial space. Paban’s earlier film Loktak Lairembee was acquired by Netflix but he feels that it came about only because it was the toast of international film festivals. “Everything boils down to business and to the market and while I would love for my films to stand out and be noticed, there is deep satisfaction when the people I know in the hills tell me they feel heard and seen in Nine Hills One Valley. That is what I will hold on to as I move on to the final stages of my third feature film,” says Paban.