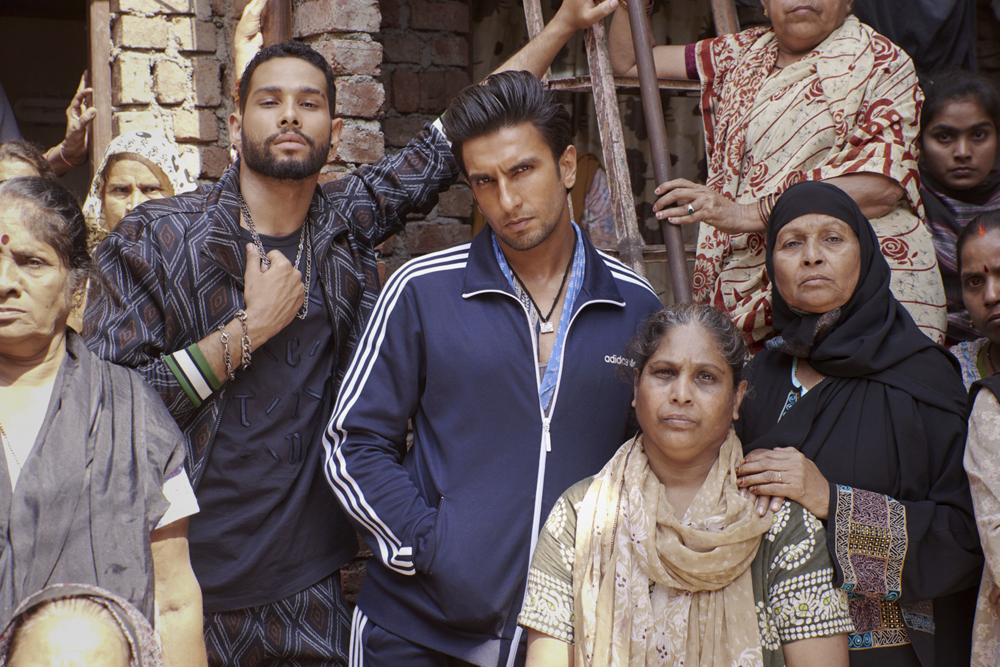 Really good music always has a political text, and Hip-hop underlines this, like no other genre. It emphasises that Rap, which is a part of the Hip-hop culture of protest, of social awareness, of a focus on the marginalised, must turn music into a political instrument – with rhythm, with poetry, with beat, and with the ability to connect to listeners who are empathetic to the condition of being turned outcast. At least, this is how it evolved.

‘Gully Boy’ ticks all the right boxes in giving us a rough adaptation of the lives and work of the well known Indian rappers, Naezy and Divine. The actors in the film are not playing these rappers specifically, but are incorporating their shared experiences of living in the metropolitan area of Mumbai, with its stark economic and cultural disparities. The shanty town and high rise contrast is so stunning that it has become a tourist attraction, and this is turned into one of the early scenes in ‘Gully Boy’. Murad Sheikh (Ranveer Singh) is relaxing one late morning in his one room tenement, when a tourist guide turns up, and wants to show his clients the smallness of the room. Money changes hands, and privacy is violated for a price. Murad feels the humiliation. But a tee shirt on the rapper, Nas, worn by one of the white man exploiters, makes it up for him.

When he composes rap, Murad’s social conditioning as a good muslim with a conservative father, comes into play, and this is the most charming part of the movie. Here he is exploring the modern edges of a musical tradition. A bright student doing his graduation, he prays in the mosque, protects his mother from his abusive father, and earns money by means legitimate and otherwise. He refuses to accept his Dad’s position that a man must remain in his social and professional status, or disaster will strike him down. He rebels against these views, with evocative lines that he sets to music.

When his father (Vijay Raaz) sends him off to work as a driver at the Saheb’s home, he sees the polarity in differences between two social lives, in stark images and thoughts. He drives the Saheb’s daughter to her parties. When he sees her crying in the back seat of the car one evening, he dares not turn around and ask her, like a human being, what the matter is. He is the chauffeur and she is the young ‘memsahib’. It is not in his position to speak to her of her unhappiness. But as he continues driving this weeping girl, we listen to the beautiful lines emerging in his head from this moment of emotional conflict. It is a poignant moment in the many scenes of Murad’s composition of his personal experiences into music.

From the world compressed into his head, Murad travels out of it. Exploring the rap music scene with his gentle and affectionate mentor, Shrikant, aka MC Sher (Siddhant Chaturvedi), he temporarily leaves his small and contained world for the universe in which he has now gone viral. His possessive girlfriend (Alia Bhatt) with her temper tantrums haunts him, even as he enters a world where he has the freedom to have a friendship with a woman – with benefit. A graduate from the Berklee College of Music, Sky (Kalki Koechlin), takes both Murad and MC Sher under her wing and they go places. But, appropriately, when Murad is away from the environment that gave birth to his music, he starts to recognises its absence, and returns to the community and the relationships from which it originated.

Sky lives in the sky, a high rise building in an upscale area. She lives in one flat, and her parents in the flat above. When she invites Murad in, he visits her bathroom, and measures the space within, by taking steps backwards. He realises that it is as big as the tenement he grew up in, and as he considers this idea, lines that define the disparity in human experiences, creep into his head.

The visualisation of a lyric and a beat, the process of composition, is very well done in ‘Gully Boy’. Where it falters is in the obsessive repetition of the same ideas and the same, or very similar, images. The JJ Flyover bridge and the 2.5 kilometre route snaking in between old heritage buildings on either side is quite striking, but the director treats it like one of the wonders of the world. We have so many shots of the over bridge, we could drown in them, as we can with the railway tracks and the BEST buses, and the close-ups of the gaunt faces in the shanty towns, all through this 153 minute movie.

On top of that, we have two big movie stars who live on the right side of the tracks, and are portraying characters who live on the wrong side of them. There is an imagery problem, here. The film is not a bio-pic, but takes life stories and fictionalises them, and then describes the nonconformist and political content of rap, which is at the centre of the creativity in these characters. Meanwhile, Hindi cinema and its actors have becomes so socially conformist and politically evasive, that even a film made as well as this, sometimes rings hollow in its political dimension, when portrayed by them.

However, when all told, ‘Gully Boy’ is a refreshingly different film on a subject not normally trodden by mainstream cinema. For this all credit goes to the writers, director, and the two real life rappers, along with many supportive rappers on the Indian scene. It is a film well worth seeing, though a bit exhausting with its length.