Gauri Shinde: Every Day Is a Story

The art of Gauri Shinde borrows from whatever life offers, good or bad. The filmmaker talks about her new work with Priyanka Pereira 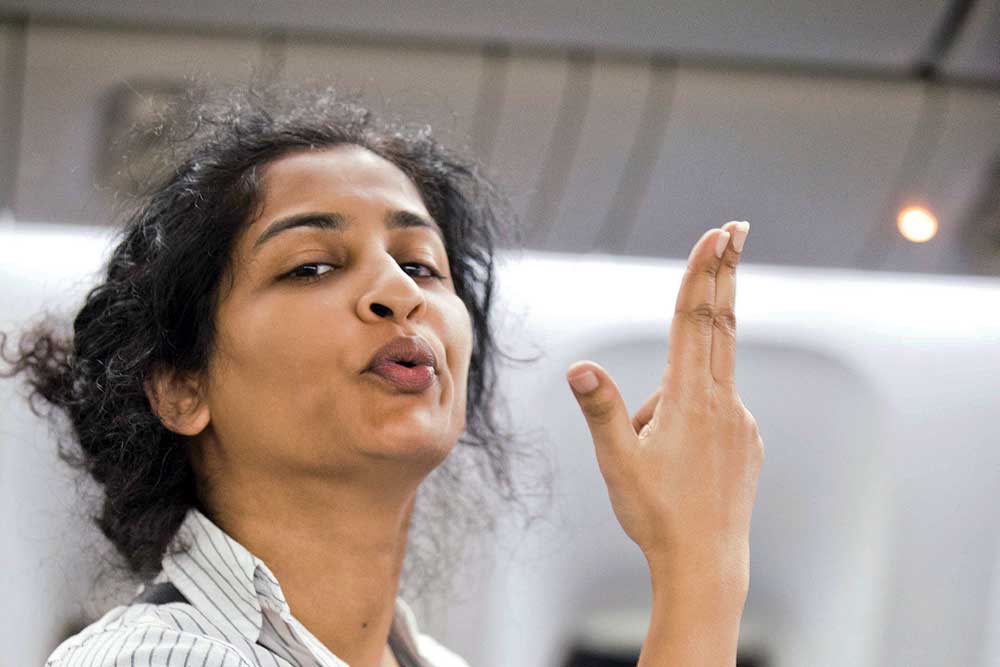 IT HAS BEEN an exhausting day for filmmaker Gauri Shinde. She is juggling interviews, post production and incessant phone calls for her upcoming film Dear Zindagi. “It is easier making a film than promoting it,” she says with a sigh before settling down in her Khar office. “Thankfully, I have a cast who is enthusiastically promoting the film and I don’t have to do it on most days.” I ask her if perhaps this is one of the reasons why she took almost four years to come up with her second film, and she laughs out loud. “You have answered your own question. But jokes apart, this wasn’t the reason. In fact, English Vinglish doing well was reason enough for me to believe that I am capable of making my second film.” Shinde’s office space is a happy one, just like her demeanour. The wife of celebrated filmmaker, R Balki (who directed Cheeni Kum and Paa), she made her mark in the Hindi film industry with English Vinglish, a story of a middle- class housewife who grapples with her inability to speak English and finally learns the language in the US. The 2012 film marked Sridevi’s comeback, and brought Shinde acclaim for her sensitive handling of human emotions. The story arose from her mother’s insecurities of not being able to speak English, which made her send Shinde and her sister to an English-medium school. The film was an ode to her mother.

But for her second outing, which she has also written and co-produced, inspiration has come from life. “In our day-to-day life, we see and observe a lot of things and people. There are a lot of influences—both positive and negative— that you absorb in life. Life and its amalgamations itself forms the crux of Dear Zindagi,” says Shinde. In the film, Alia Bhatt plays an aspiring director who discusses her personal, romantic and emotional issues with her therapist, Shah Rukh Khan.

The promos have gathered a favourable response, and the unusual casting has people looking forward to it even more. Shinde, who believes a lot in human chemistry, feels that a certain kind of people attract their own kind. “When I was writing Dear Zindagi, I did not really have a cast in mind, but when I completed it, I immediately knew that I had to cast Alia Bhatt and Shah Rukh Khan in it.” She found a child-like quality in both the actors. “Alia is a super performer, and Shah Rukh doesn’t try to be cool, he just is cool.”

Soon after English Vinglish released, the 42-year-old filmmaker was already planning her second venture. “I had gone to New York with the sole intention of finishing that script and going on the floor with that film. However, life had different plans for me,” she says, recalling the moment when Dear Zindagi was born. “I was in my hotel room, all by myself. I was looking outside and I happened to observe something which got me thinking. I tore all the pages I had written so far and decided that this is going to be my next film.”

Films are more life than life itself for the filmmaker. “Life is like a rainbow, there are different colours in there. There is extreme pain, extreme love, extreme anger, extreme grief. But it is the extremes that make life worth living.”

Life is like a rainbow, there are different colours in there. There is extreme pain, extreme love, extreme anger, extreme grief. But it is the extremes that make life worth living

While Shinde borrows from her surroundings, her biggest strength as a filmmaker comes from how she sees a story in every person she meets. “Sometimes one particular anecdote stays with you. You can form a connection with a stranger too. It could be temporary, but something could leave a lasting impact,” she says. But she adds she is a loner at heart: “I like being with myself, my books, my films and the few people who I like. I don’t have the bandwidth to waste my emotions and energy on people I don’t like.”

While Shinde has carved a niche for herself with her brand of cinema, word of her being Balki’s wife does precede her at times. Given the kind of success both have had, it almost seems like they are one of the most sought-after Bollywood filmmaker couples. Shinde and Balki met while working in an advertising agency and have been married for almost nine years now. “It was love at second or third sight,” she quips. It was their sheer love for cinema that brought them together—their first date was at a theatre watching Dushman , followed by another film, Zubeidaa. Over the years, they have become each other’s sounding board—criticising each other’s work, appreciating their concepts and working in tandem over certain ideas.

“I owe a lot of me as a filmmaker to my advertising days,” Shinde says. Much before she became a feature filmmaker, she was an ad filmmaker and this laid a great foundation for her. “I would be lost without my ad film experience. Perhaps I would not be here had I not done ads earlier. The aspect of working as a team is something I learnt there. Another lesson I learnt was to always work with a crew you love and respect, because that will give you the best results,” she adds thoughtfully. Shinde follows this tradition till date and does not start a film unless she is fully satisfied with her crew. “Making a feature film is a different ballgame and it only becomes more necessary to have the right kind of people,” she says. Apart from the crew, ad filmmaking has also taught her to not bore people. “I try my best to look at my work as a viewer and make sure I am not bored by it,” she explains.

Just two films old in the industry, Shinde believes she has a long way to go before she is recognised for her brand of cinema.

For now, she is focused on delivering Dear Zindagi. “It’s like when you are having a baby, you cannot think of the next one,” she says with a smile. “It is the same with films for me. If I think of any other idea or concept right now, I will feel like I am cheating on this one.”