The end of an era in Hindi cinema 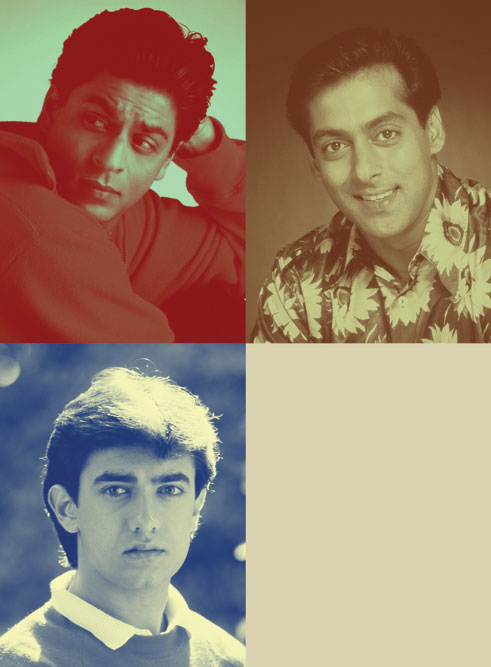 
FOR THE FIRST time since 1988 when they burst on to the screens, big and small, a Khan was not front and centre of popular conversation in India. As Shah Rukh Khan nursed self-inflicted wounds from Zero (2018), a large film about a very little man gone wrong, and Aamir Khan tended to his beard for a new film, Salman Khan tried manfully to keep it together, taking his muscles and the bags under his eyes, to Bharat (2019), Bigg Boss 13 weekends and at the fag end of the year, the third instalment of Chulbul Pandey Tells People How to Chill aka Dabangg 3. After three decades of entertaining India and increasingly the world, it seems the Era of the Khans, all born in 1965, is over. The Actor Forever in Search of a Character, Aamir Khan, did not have a single release after the disastrous attempt at playing the is-he-good-is-he-bad Thug in Thugs of Hindostan in 2018. Rahul/Raj The Romantic, Shah Rukh, looked tired around the edges, with Zero crashlanding, though his innate intelligence shone through whenever he was himself, whether it was Star Plus’ TED Talks India Nayi Baat or My Next Guest Needs No Introduction with David Letterman. Suddenly, as he showed off his cooking skills and spoke of growing up in Delhi, India realised why it had fallen in love with the man with the odd hair and unnerving intensity. It was the same with Salman Khan, whether he scolded Bigg Boss contestants for misbehaving, flirted cutely with Katrina Kaif onscreen in Bharat or adjusted the dress of co-actor Saiee Manjrekar who, at 21, was not just young enough to be his daughter but also the daughter of one of his best friends. In the dying light of the Khan Kingdom, a New India was emerging. It is an India that seems to have little patience with old platitudes of pluralism and multiculturalism. It is an India where the Mandal, Mandir and Market mobilisations of the 1990s have merged with the rights-based legislation of the 2000s to create a new narrative of populist aggression. What was once considered a privilege is now seen as a necessity, whether it is a telephone connection, a gas cylinder or a toilet. In this India, Prime Minister Narendra Modi embodies this new assertion in dealing with the domestic margins and the global mainstream. By articulating ideas from political meritocracy to menstrual hygiene, Modi has colonised the Indian imagination, leaving very little space for other icons. His relentless publicity machine has ensured that he, more than any other public figure, now helps India understand itself. This was once where the Three Khans stood, helping Indians to navigate from tradition to modernity, as they themselves moved from the callowness of youthful romances to bigger themes. India saw themselves in the trifecta. By associating their stardom with Prime Minister Modi’s various projects, whether it was Swachh Bharat, demonetisation or even celebrating 150 years of Mahatma Gandhi’s birth, the Khans have effaced their own primacy in the cultural space. Add to that the old certainty that created conditions for three decades of three Khans has vanished. As sociologist Shiv Visvanathan says, the triangle of contemporary Khans has to be understood within a rough genealogy of heroes. “The fifties saw the dominance of Dev Anand, Dilip Kumar and Raj Kapoor. There was something urban and urbane about them. The first two embodied the middle class hero while Raj Kapoor brought a hint of Charlie’s Tramp to add a touch of socialism. The late sixties gave way to two heroes who dominated the screens as individuals. The first was Rajesh Khanna who exuded a poetics of romance. This gave way to the myth of urban violence, epitomised by Amitabh Bachchan as the angry young man.’’ The next triangle was a set of composite, equivocal figures whose heroism needed time to develop. These were the Khans. Each began with a touch of adolescence which each tried to shrug off in their own way. Salman Khan, notes Visvanathan, became the eternal adolescent, the boy next door who never grew up. So much so that he even went on record on Koffee with Karan to suggest that he was a virgin. Aamir, the autodidact, matured the most attempting a more serious sense of himself in experimenting with historical movies like Lagaan (2001) or Dangal (2006), the biography of a wrestling family. Shah Rukh was more ambivalent, adds Visvanathan. As Hema Malini once said, all one had to do was change his hairstyle and he would be a villain. Growing old was toughest for him, caught between the changeless Khan and the perpetually changing Khan. Time has been toughest on him. “People watching his movies often ask ‘How did I like this guy?’” Yet he marks all of us growing up. He is the common denominator of the Khan in all of us, a middle class hero, an outsider, a man who has made it on his own.


Each began with a touch of adolescence which each tried to shrug off in their own way. Salman Khan became the eternal adolescent. Aamir, the autodidact, matured the most. Shah Rukh was more ambivalent

OLD NOTIONS OF masculinity embodied by the three Khans are also changing. Even as the toxic masculinity of Simmba (2018) and Kabir Singh (2019) finds an echo in a country increasingly confused about the rise of women, a new idea of how to be a man is emerging from the movies of Ayushmann Khurrana. This is a masculinity that is trying to come to terms with urban alienation (Dream Girl, 2019), imperfect looks (Bala, 2019) and social divisions (Article 15, 2019). It is a masculinity that is no longer sure of its unchallenged supremacy in India and indeed in the new world. Also it is a masculinity that is not quite sure where it’s coming from, mirroring the increasingly migratory nature of the Indian citizen, and it’s not clear where it is going either. In the New India, as protests over the Citizenship (Amendment) Act and the National Register of Citizens have shown, the three Khans are becoming irrelevant. Having always transcended their community, and indeed thanks to their marriages (in the case of Aamir and Shah Rukh) or their mother and extended family (in the case of Salman), they have rarely spoken up for Muslims—or for the nation. On the occasions they have spoken up for liberal causes, whether it be playing cricket with Pakistan, or the lynchings of Muslims and Dalits, they have been boycotted, trolled and pilloried. They may have chosen to keep their political views to themselves, but their art remains fiercely patriotic, whether it is Dangal, Bharat or Swades (2004). As cultural studies professor Rajinder Dudrah says, they will certainly have to think carefully about the next few years of the new decade. They will be entering their late 50s, approaching 60 and will have to look carefully at the roles they choose. The last few years have seen a series of flops and mixed reactions from audiences and so the Khans might well be cautious about what they take on next. He says another Khan who might help show them way is Saif Ali Khan. “With his successful move across online TV and co-producing and supporting new talent, might this also be a model that we see the other Khans adopt? If the Khans are to remain relevant and popular, the next decade will need to be a period of acting on reflection and criticism, and re-presenting themselves across a range of media. Will we even get to see them starring more regularly alongside actresses nearer their own age? That would be exciting.” That hasn’t happened unfortunately. While Salman was paired opposite Saiee Manjrekar in Dabanng 3, he was also knee-deep in the pre-production of Sanjay Leela Bhansali’s Inshallah opposite Alia Bhatt—all of 26—before creative differences ended the project. Aamir Khan teamed up with Fatima Khan in Thugs of Hindostan though the relationship wasn’t exactly romantic, perhaps given that she had played his daughter in Dangal. Shah Rukh Khan acted with Alia Bhatt in Dear Zindagi (2016), but in a clearly avuncular role, complicated by his being her therapist. None of them has acted with Madhuri Dixit since her return to cinema, though each of them has had blockbuster hits with her. Their political timidity may well come from their having become brands and businesses, rather than mere actors. Shah Rukh Khan owns cricket teams, runs a successful VFX business and has a production house that makes determinedly middle-of-the-road cinema and digital content, whether it be Badla (2019), a remake of the 2016 Spanish film, The Invisible Guest, or Bard of Blood for Netflix. Salman Khan and his extended family control the production of his movies now, while Aamir Khan runs a film company that has acquired a reputation for making smartly packaged, new age movies and TV. His own film choice, however, a remake of Forrest Gump (1994), which will be released on Christmas 2020 is not the inspired out-of-the-box choice one has come to expect from the great risk taker.

Siddhartha Basu, who has worked closely with Salman and Shah Rukh, believes their innings are far from over, but he echoes the sentiment about them playing safe. “If they take risks with the right sort of content which connects with the currents and undercurrents of the times, making best use of their talents and personas, mixing the right degree of change with continuity, then they have enough goodwill stored to take the ups with the downs and stay in it longer,” he says. After all, Amitabh Bachchan was on the verge of financial and creative bankruptcy when he reinvented himself as the ageless patriarch for the new millennium with Aditya Chopra’s Mohabbatein (2000) and the TV show Kaun Banega Crorepati. Aamir Khan can choose edgier movies, Salman Khan can continue to be the iconic working class hero, everyone’s favourite bhai, a Hanuman bhakt who wants peace with Pakistan. And Shah Rukh Khan, described by Fatima Bhutto as the world’s most famous film actor, riding a wave of Global South pop culture that includes Turkish soap operas and Korean pop music, can make international entertainment that marries the best of Bollywood stories and his own undeniable appeal. Those outstretched arms, at once inclusive and expansive, need to be doing more than holding aloft half-baked storylines shot in exotic locations.