Believe it or not, Salman Khan underplays his role in this hugely entertaining film 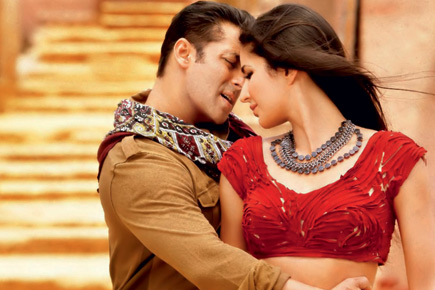 Believe it or not, Salman Khan underplays his role in this hugely entertaining film


‘There was a young lady of Niger/ Who smiled as she rode on a tiger/ They returned from the ride/ With the lady inside/ And the smile on the face of the tiger.’ The lady in question in this film is from Pakistan, not Niger, but since we are told in the movie that there are about 200 countries in the world,  give or take a few secessions and declarations of independence, why choose a tiger from India? But love is a many splendoured thing, and so Zoya, an agent of Pakistan’s ISI, falls for Tiger, who is from India’s RAW. Tough luck for Zoya (Katrina Kaif). But this is a Hindi film, and so, be it love or war, Pakistanis are going to get a raw deal.

They are going to get Agent Tiger (Salman Khan). Interestingly, Salman underplays his role to the point of seeming to actually create a credible character. He plays a workaholic intelligence officer who has no time for dating or spending his pay cheque. With little apparent respect for consumer culture, he buys nothing for his bachelor pad, and apart from cooking a mean dal when his boss (Girish Karnad) comes to visit, the only visible signs of success in his life are bruises on his face from recent battles with enemy agents.

Ek Tha Tiger sets itself up as a colourful espionage romance set largely in Delhi,  Dublin, Istanbul and Havana. The love affair starts when Tiger is sent on a mission to Dublin. He is given specific instructions not to kill anyone, as is his wont. He is to pose as a writer, keep an eye on an Indian scientist at Trinity College (Roshan Seth, looking quite dapper), and find out whether the good professor is leaking classified information on India’s missile defence shield to Pakistan.

As it happens, the academic’s housekeeper is Zoya. Love blossoms, until Tiger catches Zoya downloading files from her employer’s computer. He has been had. Instead of shooting her before she transfers sensitive information to the ISI, the sentimental lover aborts the mission and goes home to Delhi.  But she lures him to a conference in Istanbul by encoding messages for RAW to pick up, and the two declare their love and decide to go AWOL from their respective secret service jobs.

Ek Tha Tiger moves at a measured pace and spends more time on the scenery in beautiful cities than on Salman’s USP.  Director Kabir Khan eschews the Crouching Tiger, Hidden Dragon style of gravity-defying action that is so common in recent South Indian productions that this actor has worked in. Only in the last 45 minutes or so does the film burst into life, and then it is Hollywood-style action.

These scenes are carried off with some terrific stunt work, but even so, Katrina is genuinely athletic and carries it off exceptionally well. Both she and Salman run and leap like trained agents. The finest scenes in the movie are set in Havana. Kabir Khan’s perspective on the city is similar to Wim Wenders’ look at its quaintly preserved colonial architecture in Buena Vista Social Club , his documentary on Cuban folk music.

The ending of Ek Tha Tiger offers a utopian view of Indo-Pakistan relations: love conquers all. Overall, it is an entertaining film with a very well-matched couple.