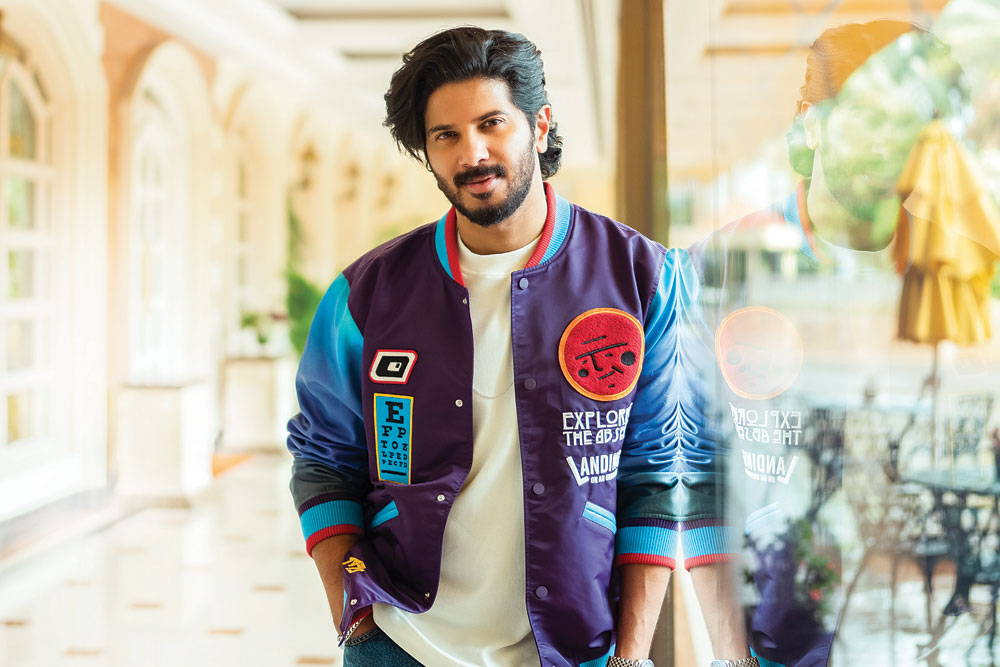 
His felicity with languages has made him a star across four film industries, Malayalam, Tamil, Telugu and now Hindi. Yet, he was so painfully shy that he had to take a public speaking course in his undergraduate pro­gramme at Purdue University, Indiana, no less than thrice to get a decent grade—and even then it was a B.

That is typical of Dulquer Salmaan, whose third Hindi film, Chup: Revenge of the Artist, released last week to a lot of chatter and respectable box office figures. Ten years into the profession, over 45 films later, and he is one of the busiest national movie stars, easily straddling commercial entertainers with more artistic, riskier choices; main­taining a lively presence on social media fuelled by an equal love for cars and his wife and daughter; and amplifying the possi­bilities of good cinema with collaborators across languages.

This year alone, he played a troubled police officer in Salute (Malayalam), an engineer with a romantic streak in Hey Sinamika (Tamil), a soldier taken prisoner by Pakistan in the 1965 war in Sita Ramam (Telugu); and an enigmatic florist with a love for Guru Dutt in Chup (Hindi). Two days after the release of his latest Chup, he has already started work on a period drama King of Kotha in Malayalam where he plays a gangster, even as we wait for his next release, his first streaming series, that too in Hindi, with masters of the twisted, Raj Nidimoru and Krishna DK, in Guns & Gulaabs.

We should also add, he is also the son of Malayalam superstar Mammootty, who has acted in more than 400 films and who continues to play leading man at 71.

For someone who could have easily coasted through Malayalam cinema on his good looks and easy charm, both descriptors he actively dislikes, Salmaan has always chosen the road less travelled. In the eclectic Sishya School in Chennai (among its alumni are actors Shobana, his co-star in Varane Avashyamund, and Arvind Swami), he would make sure that if there was any acting or dancing to be done, he would be in the background. After he went to study business management in Purdue, because that is what most of his friends were doing, he tried to set up a portal trading cars in Chennai, he spent three years in Dubai, running a construction company. “Those years taught me a lot of patience waiting for payments, for contracts, for labour,” he recalls, especially when he has to wait on set between shots. He had been making short films in school and then one day, he decided to try his hand at acting. “I didn’t want to be 40 and regret not doing this. I told my family on Friday, my sister did research online, said a course at Barry John’s Acting School is starting in Mumbai on Monday, and I took a flight carrying a demand draft. I went for jumma namaz (Friday prayers), got my shoes stolen, and there I was in the heat with my feet burning, wondering what this omen is,” he says.


“In Malayalam, I am conscious of the fact that my films have to do certain numbers at the box office so I can continue making the movies I want to,” says Dulquer Salmaan, actor

His father had told him only two things: “I can’t come and act for you; and there will be a lot of people out there who will criticise you purely because of me. You have to be ready for both.” Three months of teaching, with a watch­ful Barry John, and Salmaan was ready for the big screen. “We made a short film, performed street plays on Carter Road, and did character studies—I spent five days with a cobbler who gave me all his tools,” he says. There too, his first film, Second Show (2012), had an ensemble cast with mostly newcomers. “I guess I was hoping to blend into the background,” he says. All thoughts of that had to be abandoned by the time he did his second film, Ustad Hotel (2012), where he plays a Dubai-raised, London-trained chef who returns to Kerala to es­cape his father’s wrath, and learns how to cook with love and passion, among other life lessons, from his grandfather. “Anyone can fill their tummies,” says his grandfather, owner of Ustad Hotel, “but the key is to fill their hearts with joy.”

Salmaan seems to have taken that screen lesson to heart. In film after film, he has tried to do better cinema, looking not merely at his own role but at the film as a whole. It has taken him from Mani Ratnam’s O Kadhal Kanmani (2015) in Tamil to Nag Ashwin’s Mahanati (2018) in Telugu to Akarsh Khurana’s Karwaan (2018) in Hindi. Each film has opened a new door for him, and he has walked through it, making his world larger, filling the hearts of ever-newer audiences with joy. Sometimes his collaborative nature has worked to his disadvantage. As he puts it, “With O Kadhal Kanmani, many of my critics attributed the success to Mani Ratnam. With Mahanati, they said it was because of Keerthy Suresh.”

Some of his critics arise thanks to the strong rivalry of the Mammootty and Mohanlal fan clubs in Malayalam cinema. “It’s so odd,” he says. “They are friends and have done 40-odd films together, yet in everyone’s minds they are forever pitted against each other. I’ve always been at the receiving end of the other fan clubs. But the criticism is so detailed that they’ve obviously watched my films, so it’s a win,” he says with a laugh. There are also critics he has man­aged to earn on his own, resulting from the clearly drawn camps in contempo­rary Malayalam cinema. It doesn’t seem to trouble him. “His focus is his cinema. Everything else is the price he has to pay to do the work he wants to do,” says R Balki, who cast him as an angsty young man in Chup.

The price is becoming higher as his profile inevitably rises. Promotional tours, red carpet events, magazine cov­ers, and the chatter about his hobby of collecting cars. He understands some of it is necessary, even though it irks him. “We did 21 days of promotions for The Zoya Factor,” he exclaims, about the 2019 film, which fared poorly “and they didn’t even give it a chance in the theatres. It was like they didn’t believe in it.” The film, where he played a cricket star styled on MS Dhoni, with Sonam Kapoor playing Team India’s lucky charm, was based on Anuja Chauhan’s book, and is the kind of love story that needed special handling.

But commerce is not Salmaan’s primary concern when it comes to films in other languages. “In Malayalam, I am conscious of the fact that my films have to do certain numbers at the box office so I can continue making the movies I want to,” he says. That pressure eases when it comes to his choices in other languages. Khurana says he was surprised that Salmaan took a chance on him, a newbie director then with just one film, making an indie, feel-good road movie. “He did it purely on the basis of the script and narration. He goes by his gut and has dabbled in every genre. He’s also so aware of cinema hav­ing grown up in that world and he is so collaborative that he gets the scene im­mediately,” he says. Bejoy Nambiar who directed him in Solo (2017), where he played four different characters based on earth, wind, fire, and water, says he’s an absolute team player. “I was taken aback by his level of commitment. He’s so down to earth and grounded. Getting him to depart from the norm was not difficult at all,” he adds.

“Director Balki had more faith in me than I did. He just told me the role in Chup and left it to me to feel it,” says Dulquer Salmaan

Getting him to collaborate is even easier, especially when it comes to advancing the cause of good cinema. So whether it was playing the somewhat unsympathetic role of Gemini Ganesan in Mahanati or a Hindu soldier who believes in fighting for his dharma in the interfaith romance in Sita Ramam, he is happy to step up to the plate.

Malayalam cinema has also been the home of toxic masculinity, not merely in the onscreen depiction of men, but also in real life cases. Al­though a women’s collective, formed in 2017, has tackled the subject head-on, patriarchy still persists in the industry. Salmaan’s onscreen pres­ence carries a certain comfort of a man not afraid to be overshadowed by the woman in his life, whether it is the posh and proud Tara (played by Nithya Menen) in O Kadhal Kanmani who is as determined as he is to have a career of her own, or the brattish weather sci­entist Mouna (Aditi Rao Hydari) who takes him for granted in Hey Sinamika, or even the smart, movie-loving jour­nalist of Chup whose passion for Guru Dutt equals his own. Scholar Aysha Viswamohan calls it “a cosmopolitan masculinity”. As Salmaan’s character, Yaazhan, says to Mouna in Hey Sina­mika, “You smashed me into pieces.” His solution? “You be yourself,” he tells her,” and “I’ll be myself.”

He endorses this perhaps because he had to develop a personality before he became a persona. He grew up watch­ing Shah Rukh Khan films in Chennai, usually the only boy among several girls, all friends of his sister. “I remember watching Dilwale Dulhania Le Jayenge (1995) and buying the tickets of Kal Ho Naa Ho (2003) in black,” he says. Khan’s romantic avatar—except in his three stalker movies—has probably shaped the notion of love for an entire genera­tion, including Salmaan.

At 36, he has a long career ahead of him. “He is a very refreshing, modern ac­tor, so casual in front of the camera and I love that he does the craziest things with a straight face. His only method is being there, feeling everything in full,” says Balki. Given his love for experimenta­tion, there are many languages, indus­tries and platforms left to conquer.